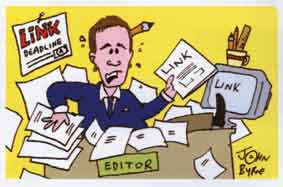 Bob Sarti, now retired from a long career as a Vancouver Sun reporter, recently revealed in a letter published in the Carnegie newsletter that he did not always let the facts interfere with a good story:

“When I was a young reporter, I was told to always get both sides of the story. That’s what was called balance. Like many other reporters, I ignored the rule from time to time; never let the facts stand in the way of a good story. Now retired, I can’t say I’m necessarily proud of it. But that’s the way it was/is in the mainstream media.”

Certainly in stories on the Downtown Eastside, a lack of due diligence on the part of Vancouver Sun reporters is noticeable. Take, for instance, Thursday’s cover story in the Westcoast Life section, "Beauty and the Streets".

In the story, reporter Michelle Hopkins took the predictable angle of portraying women on the Downtown Eastside as sex trade workers, drug-addicted, hopeless, hapless, and homeless. That sells papers. Hopkins pointed out that Beauty Night at the Health Contact Centre was organized by Caroline MacGillivray, who got the idea while in the Downtown Eastside researching a movie role by interviewing sex trade workers. Volunteering at WISH Drop In Centre where hookers hang out “exposed me to the women”, MacGillivray explained. “One night I did the hair for one of the street workers. She had tears in her eyes as she thanked me and gave me the biggest hug.” The whole article consisted of variations on this theme.

Volunteer Santina Sorrenenti, is quoted as saying that Beauty night shows these women that there are people out there who “don’t judge them”. Jennifer, a former sex trade worker and cocaine addict, is quoted as claiming that the volunteers at Beauty Night “gave me my self-esteem back." More of the same theme.

This story would be convincing to a reader who did not happen to recognize anybody depicted. But I took a double take at a colour photo accompanying the story -- in the paper edition, not the web -- of a woman relaxing, getting her toenails painted red. The caption read, “Leah, a nursing student, with a client.” I recognized the client: "Hey, that’s Tony!" She's a youngish, forty-eight year old woman with long brown hair which she dyes a shade lighter than her natural colour, and round brown-rimmed glasses. Her real name is Antonia.

Tony doesn’t live on the Downtown Eastside but she knows a bargain when she sees one. She lives in Mount Pleasant, in a housing complex at 33rd and Main, and occasionally drops into the Carnegie Centre which is just next door to the Health Contact Centre. It’s hard to imagine anyone with a bottle of nail polish giving Tony back her self-esteem. She seems to have enough self-esteem to get by; she’s confident, friendly, and has lots of friends. She raised two children. And she’s certainly not sticking a needle in her arm. Or selling her body. And neither are her grown children.

Tony didn’t mislead the Sun. It’s just that when the volunteer was doing a toenail job on her, the Sun was doing a ‘don’t ask, don’t tell’ journalism job on the public.

Vancouver Sun slack reporting about the Downtown Eastside was in evidence as well on the front page of the Friday, Dec. 8, 2006 edition. The headline screamed, “Our Four Blocks of Hell” with a bold subheading, "TV sets dropped from windows." The article covered a report just released by City Engineering about garbage and disorder in the area.

“Clothing thrown out of the area’s many single-room occupancy buildings became
tangled on overhead lines and heavier items like television sets were dropped to
the streets, endangering passersby.”

A woman who has lived for 15 years on the border of the four block area covered in the report remarked that she had never known a tv set to be thrown out of a window. Another woman who has lived in the DTES for over 30 years and eats almost daily at the Women’s Centre near Hastings & Columbia, has heard of a tv set being thrown out of a window -- just once. She emphasized that when something like that happens, it is definitely treated as unusual. “People talk about it.”

A binner who has also lived for over three decades on the Downtown Eastside, including in the area of the “Four Blocks of Hell”, says he has never known a television set to be thrown out of a window. “People smash tv sets in the alley,” he explained. “I’ve done it myself; they do it to get the electronics out, and the little bit of copper in the picture tube.” Copper can be sold. Computer monitors are also seen lying smashed in alleys and occasionally even on sidewalks, with the copper removed. Smashed tv sets may look to a person from outside the neighbourhood like they’ve been dropped from a window but the binner believes that scenario is unlikely. What is more likely, he believes, is that Janet Steffenhagen doesn’t know her beat.

Even the claim that clothing "thrown out of the area's many. . . buildings" is exaggerated somewhat. Anyone looking overhead as they walk through the four block area can see that for themselves. “You sometimes see clothes or shoes on the telephone lines, especially outside the buildings that house the mentally challenged,” the binner explained. “But it’s not like it’s every second building.”

Vancouver Sun journalists do not always stop at slackness or sloppiness though; they have been known to resort to outright fabrication. Look at the description of the clientele of the Carnegie Centre by Miro Cernetig in the October 30, 2006 edition of the Sun: “On any day or night, you can find them here getting help from social workers, free medical advice or sometimes just some much needed companionship.” Reality check: there are no social workers at Carnegie. The Director has credentials as a social worker but she was hired as an administrator and is burrowed in her top floor office. Reality check: Carnegie is not a place where people can go for medical advice. During a severe flu season, a couple of nurses may do a brief stint in the lobby, sitting at a table with a sign announcing that they're giving flu shots. But they are not there to dispense general medical advice.

In the next paragraph of his story, Cernetig makes a claim that brings to mind the expression, "Who should I believe, you or my lyin' eyes?" Cernetig writes: "The Carnegie’s tiny library is nearly always packed with the Downtown Eastside’s residents, some reading newspapers, some studying for courses to improve their lot in life….” In the 20 years, I have used the Carnegie library, I have never seen anyone studying for courses. I’m not saying that has never occurred. But the Carnegie Library is more of a reading room than a library, a place where people drop in to sign-out and read one of the daily newspapers.

The Vancouver Sun does not limit their sloppy coverage to stories about the Downtown Eastside. The Sun’s Editor-in-Chief, Patricia Graham, pointed out in a leaked internal memo last year that her mistake-prone staff couldn’t even tell the difference between a Palestinian and a Jewish settler when creating a photo caption. Graham noted in the memo that when people see mistakes, it undermines their confidence in the entire newspaper.
Posted by reliable sources at 9:40 PM

Povertarian: a new word on the Downtown Eastside 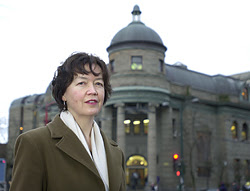 
For decades, "poverty pimps" has been a term used by Downtown Eastsiders to describe the flock of poverty industry workers who descend on the Downtown Eastside everyday. But “povertarians” works better. Dag at Covenant Zone began using it recently and it’s catching on.

"I wanted to be director of the Carnegie because I had a real urge to be closer to community, and to be in the middle of community, and this is a real opportunity to do that."

But what Whitty seemed to prefer when she arrived at Carnegie was a gated community. She rarely ventures outside her third floor executive office to mix with the underclass. She does make an appearance in the cafeteria on veggie burger Tuesdays, sitting at a table surrounded by Carnegie members more carefully vetted than the front row at a Republican convention.