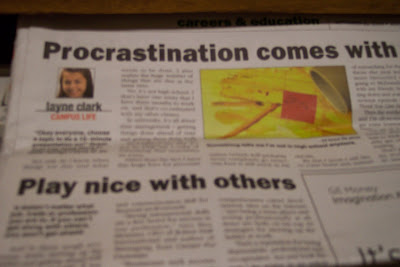 The last time I saw Layne Clark, it was years ago on the evening news. Her father NDP Premier Glen Clark was in the middle of a scandal so a Vancouver news crew went to the airport to meet him. Layne was just a kid and when she saw her father get off the plane, she ran into his arms.
I remember the reporter saying her name was "Layne"; the name stuck in my mind because I thought it was unusual but I liked it.

This week, Layne wrote about her battle with procrastination. "...I still like to come home and, instead of researching for that essay thesis due next week, I'm more interested in, say, going to McDonalds to eat with my friends before sitting down and watching the newest episode of So You Think You Can Dance."

Layne is no doubt benefiting from her father's connections. When Glen Clark stepped down as Premier, billionaire businessman Jimmy Pattison hired him. When the Pattison Group and Sun Media started 24 Hours as a joint venture, Clark had the job of managing it. Pattison sold his share of the Vancouver edition in 2007.
Posted by reliable sources at 11:10 AM 7 comments: Links to this post