Rock in the New Year with a Civil Liberties Abuser 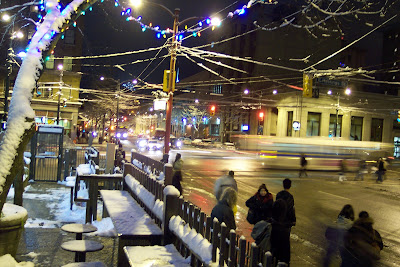 Carnegie members thought they were done dancing to the tune of John Ferguson when he retired as head of Carnegie Security. But now they are expected to ring in the new year dancing to his band, the Rockingguys.
Despite his record of involvement in abusing the civil liberties of low income Downtown Eastsiders who couldn't afford lawyers, Ferguson and his band the Rockingguys have been invited to play the New Years dance tonight at Carnegie. The poster at Carnegie advertises the Rockingguys as offering "lots of sax..." and "party favours (and after party favours)". Ferguson also played the Christmas Volunteer dance at Carnegie.
First things first: the guys who play with Ferguson in the band, most or all of them being Downtown Eastsiders, are not involved in human rights abuses. Forget them.
The complaining is about Ferguson. One musician is asking: Why is Ferguson taking money that is supposed to be available to be earned by low income musicians in the Carnegie Music Program? This musician says that Carnegie used to pay bands $500 for dances on Special occasions, but he believes it is now $750. That money is split amongst the band members. Ferguson has been known to donate his share to the Carnegie Newsletter, but that doesn't make it right, according to the musician. Musicians who frequent Carnegie -- virtually all of them are living on welfare or less -- want the opportunity to earn that money. Carnegie funders are told afterall that the Music Program is to help Downtown Eastsiders develop skills.
Ferguson has rarely been seen at Carnegie since he retired. He is not part of what the povertarians like to call the "community". Where was he when his former fellow CUPE members were disenfranchising the poor by barring homeless William Simpson from the building after they had elected him to the Board? What did he do? He showed up on the picket line to support the very people who had been involved in the barring. He stood on a picket line with Dan Tetrault, Rika Uto, and Colleen Gorrie. When Board member and musician Rachel Davis was defending the right of Simpson to sit at the Board table, Ferguson, if I remember correctly, refused to talk to her when she approached him.
The musician believes that the reason Ferguson is being hired for dances on special occasions that pay well -- the regular monthly dances pay $250 (about $50 per band member) and they are often assigned to low income Downtown Eastsiders -- is that it relieves Carnegie staff of the responsibility of having to stick around until after the dance ends to pay the musicians. "The New Years dance doesn't end until 12:30," he said. "They can leave the money with Ferguson and he'll pay the musicians." Staff trust Ferguson. He is one of them.
This is not the first time I've heard grievances aired about Carnegie staff or retired staff siphoning money off the Carnegie Music Program. I heard a different musician complain a year and a half or two years ago that the Carnegie Music Program was becoming a "staff perk". He named "Peggy and Sue", two women employed as street workers in the Carnegie Street Program, who were being hired to play and sing at Special events. Like the other complainant, this musician didn't mind people from outside the neighborhood showing up to contribute to the music program, he just didn't want current or ex CUPE members being given priority over local people in earning what little money the Music Program had available.
Complaints about the Music Program remind me of what Nathan, a guy who used to run a Philosopher's Cafe on the third floor of Carnegie said, when asked why Governor General Michaelle Jean would give former Carnegie Director Michael Clague the Order of Canada for his work with the poor ...without asking the poor what they thought of him. Clague was Director while Ferguson was head of Security, a period when civil liberties abuses were rampant at Carnegie. Nathan's response was this: The middle class talk to one another, not to the poor. That's the way the world works. 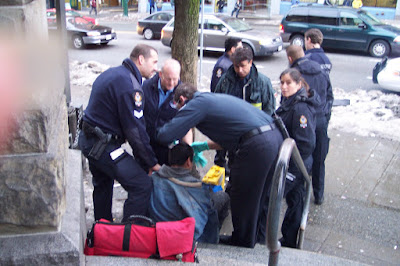 Just after 3:30 p.m. today, Vancouver Police apprehended a guy in front of Carnegie Center who apparently was "flashing knives around". A man told me, "I heard yelling, 'Get on the ground! Get on the ground! Then I saw four cops with guns out." 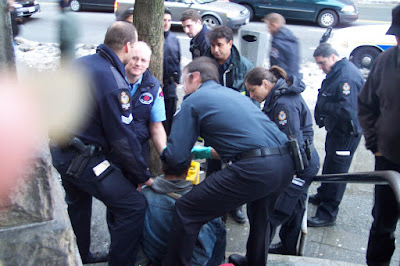 A male police officer reportedly asked underclass men standing around in front of Carnegie if they had witnessed anything. They said they hadn't. But they had of course seen something because they were chatting with one another about the incident. One guy later said, chuckling and shaking his head, that one of the knives the guy had been flashing was large. 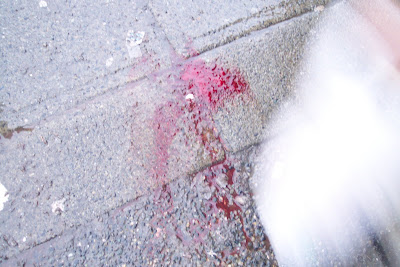 There was blood on the sidewalk. In addition to the blood in this photo, there was a smaller area of blood nearby on the sidewalk. The blur on the right of this photos is someone's pant leg as they walked by. I asked a witness if the guy on the steps had been stabbed and he said, "No." 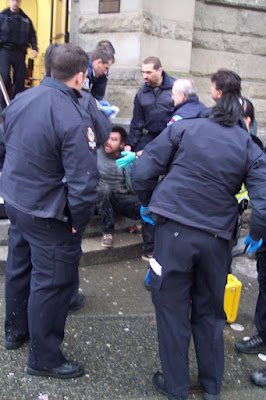 Police sat the suspect on the steps of Carnegie Centre in handcuffs. Paramedics arrived and put a white bandage around his head. He was apparently bleeding. 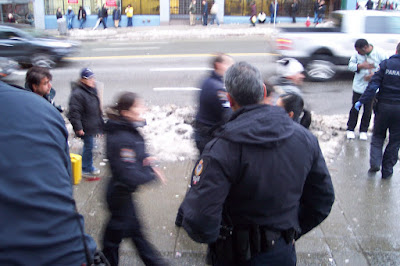 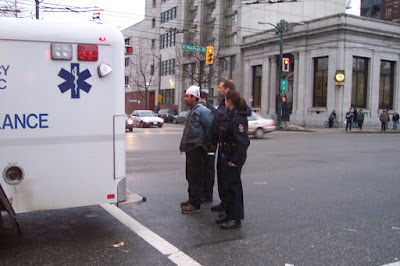 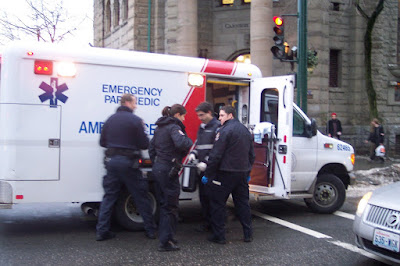 A person with a camera offered to take some photos and send them to me. Comments late made by the photographer via email left me with the impression that it's time Chief Chu had a talk with his constables about respecting the Charter of Rights and Freedoms. When the photographer went to take a photo, a female police officer with dark hair apparently made a point of stepping in front of the camera to block the shot. Photographers have as much right to work on a public sidewalk as police do. There is no expectation of privacy on a sidewalk and taxpayers have a right to see photos of police at work.
Posted by reliable sources at 4:04 PM 7 comments: