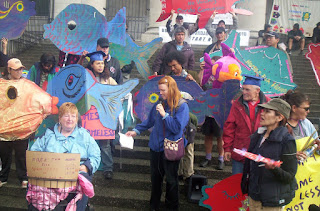 Wendy Pederson, a paid organizer of the protest, is the woman with red hair and a blue jacket in the center with the microphone. The woman sitting at the bottom left in the light blue coat is Sheila Baxter, author of "Under the Viaduct" and other books about poverty. 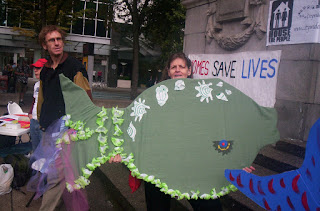 Ada, who 'volunteers' at Carnegie Center doing dishwashing and other tasks in exchange for food vouchers, holds a fish at the protest. (Ada, your fish is upside down.)

Roughly ten brightly colored cardboard fish were held by people standing on the steps on the Vancouver Art Gallery at lunch time today.

The weather was more suitable to fish than to people, wet with puddles. But the sun appeared shortly after about 60 people gathered in front of the Art Gallery. They listened to speakers protesting the failure of oganizers of the 2010 Winter Olympics to make good on their promise to build social housing.

The protesters wanted the world to know that governments renegging on their promise to make social housing an Olympics legacy were considering coughing up $90 million to expand the aquarium in Stanley Park. In a handout at the protest, organizers summed up their case:
“While more than 2000 people are sleeping on our streets, the Vancouver Aquarium expansion is about to provide luxury homes to captive fish for $90 million. The fish aren’t happy about it and neither are Vancouver residents. “

With the exception of several reporters and tv cameras, the crowd was made up largely of familiar faces from the Vancouver left. Wendy Pederson, a key organizer of the event is becoming a big fish in their little pond. "Our governments are rolling in dough," Pederson, a full-time paid organizer for the Carnegie Action Project on the Downtown Eastside, told the crowd as she held a microphone on the steps. "All of the money they spend on these tourist projects and then on top of that, last year the province had a 4.1 billion dollar surplus. That’s money on top of all of their spending.”

Dag Walker, a blogger at the Vancouver site, Covenant Zone, has a different take on the surplus. "If the government has a 4.1 billion dollar surplus, they should be cutting taxes."

The Carnegie Action Project and the other groups which organized the protest, Vancouver Area Network of Drug Users [VANDU], Citywide Housing Coalition, and Students for a Democratic Society, had one key demand: that the British Columbia government get to work right away and build 3,200 units of social housing.

The handout highlighting key points revealed a sense of entitlement characteristic of such protests: “Do I need to grow gills to get a home?”, Clyde Wright, Vice President, Western Aboriginal Harm Reduction and Vancouver Area Network of Drug Users member, was quoted as saying.

Some taxpayers take issue with this sense of entitlement. An argument heard on talk radio, for example, is that many working people can’t afford to live in downtown Vancouver so why should we build government housing downtown for welfare recipients and drug addicts.

Walker dismisses these left-wing protesters as "Sunday School teachers who think they know best and always need more money from the congregation for missionary work." Statements like the following from Pederson make him wince: "[The hand-made fish] represent our deep concern and love for those who are most harmed by those government policies. And it's shameful that they look after business interests and not after the interests of those who are most vulnerable."

A little girl – protesters say she was Pederson’s four yr. old daughter – stood with her head and arms poking out of holes cut into a big plastic red and gold fish, as her mother and others spoke. But like some taxpayers, she got tired of it real fast. She left with a pouty face.
Posted by reliable sources at 2:50 PM 5 comments:

Last night on the Downtown Eastside, Vancouver police picked up "a person of interest" in the murder of Marilyn Whiskeyjack. Constable Tim Fanning told CKNW that a male was arrested and is being questioned "but at this time there are no charges." Police believe Whiskeyjack knew her attacker.

A Carnegie member pointed out yesterday that with Crime Stoppers willing to pay up to $2,000 for a tip and it being over a week before welfare cheques are issued, "there are going to be some hungry drug addicts". One of them might be tempted to tip police, he said.

Whiskeyjack was stabbed in Main Room at 117 Main St. late Friday night. She died an hour later in hospital.

Whiskeyjack's murder is Vancouver's 15th homicide this year.
Posted by reliable sources at 10:09 AM 1 comment: