Money and the "Mental Health" Mantra 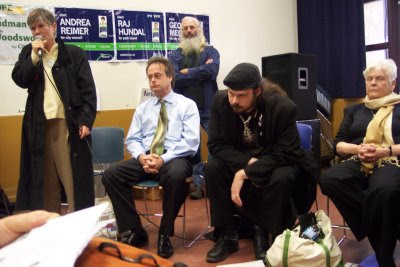 Photo:  Ellen Woodsworth (left) speaks at Carnegie Center during civic election campaign in Nov. 2008
I was at the Pacific Hotel having a beer with a friend this evening and some Downtown Eastsiders were looking at the Courier newspaper and laughing at the latest from Ellen Woodsworth, a COPE City councilor.
Woodsworth told the Courier that she had spoken out against City staff's plan to cut $200,000 from the budget of the Gathering Place, a drop-in center on Granville St. modelled on Carnegie but catering to a younger crowd.  Woodsworth said she opposed City staff's original plan to cut staff right across the Board; she believes that some communities can absorb staff cuts easier than others.  "But not filling a vacancy at the Gathering Place or at Carnegie [Center] means a loss of help for people with addictions or with mental health problems," Woodsworth said. "Those services are already in crisis and they'll be impacted even more. Then people will be on the street and calling out in ways other people find difficult to understand."
We're not wolves, Ellen.
Don't be fooled by the "mental health" mantra.  The constant portrayal of members of Carnegie as having "mental health problems" is a means of attracting funding. The majority of people who use Carnegie Center do not need mental health intervention.  People drop in to Carnegie to buy a coffee or a cheap meal, read a free newspaper, use the much-in-demand public-access computers, or participate in the music program. Exactly what happens when funding for Carnegie services does not reach Downtown Eastsiders has already been determined:  for years on welfare day and the week following welfare day, staff would drastically cut back services (until the DTES Enquirer relentlessly exposed this rip-off) and Carnegie members did not end up "on the street and calling out in ways other people find difficult to understand."
Rather than the loss of a staff position at Carnegie meaning a "loss of help for people with addictions or with mental health problems", as Woodsworth claims,  a person active in their addiction or acting like a real nut case is unlikely to even be allowed through the doors of the Carnegie Community Center by security guards who stand at the front -- and Woodsworth knows that as she used to work next door.
Poor does not mean crazy.  Yet I rarely hear a povertarian talk about the poor on the Downtown Eastside without repeating the "mental health" and "addictions" mantra.  The late activist turned City Councilor, Bruce Erikson, initiated a largely successful effort to discourage the media from repeating the "skid row" stereotype of the Downtown Eastside.  It's time media like the Courier stop uncritically repeating the "mental health" mantra which Downtown Eastsiders are left to live down as cash-addicted povertarians drive home to their own neighborhoods.
Posted by reliable sources at 9:21 PM 2 comments:

What we want, what we really, really, want is a safe park

This comment was left today on an earlier DTES Enquirer post, "Murder on the Right Side of the Tracks".  It was a response to my point that the murder of Wendy Ladner-Beaudry in Pacific Spirit Park on the west side park has 75 police officers working on it while Downtown Eastside murders, such as the murder of a young woman at the Cobalt Hotel,  seem to get less resources.
"I was very upset by your post. I resented the comparison. But you are right to a degree. A straight living woman (or man for that matter) murdered in the downtown eastside deserves the same investigative efforts as anyone. I just don't understand why people need to shove comparisons in our faces. There doesn't seem to be any consideration for the person killed or their family; just an opportunity to point out perceived social inequity.

The Cobalt situation is a poor comparison in my mind because the individuals involved have already rejected society's rules. Why should society exhaust itself untangling their nasty web. They were participating in illegal acts so they deserve less of our resources. Honestly, I don't even care who committed that murder. It's one less drug user/seller to deal with.

But when a presumably "straight- living" woman is attacked and killed in a normally safe public park it does raise alarms. Hundreds of people use that park each day, not to sell drugs or practice prostitution but to get exercise, walk their dogs and socialize peacefully each day. Most women don't enter the park alone but now NONE can without very real fear.

Maybe part of the problem is that we desperately need to believe and preserve areas as safe in a city where so much has become almost forsaken. I was born and raise here, I've lived on the eastside and the westside as well as some suburbs and I definitely need to feel like there are areas that are "sacrosanct". Untouched by violence, drugs and all the other negative and destructive forces at work in this town. We used to shop at Army and Navy when I was a kid. Back then the people you saw were down and out, some were alcoholics, but I wasn't afraid. Now it has become a total hell whole, drugs everywhere. I actually worry that my shoes might be penetrated by a needle if I'm not careful of where I step.

I really don't think it is such a bad thing for people who make different choices in life to want and even expect to be able to feel safe."
Posted by reliable sources at 3:02 PM No comments: