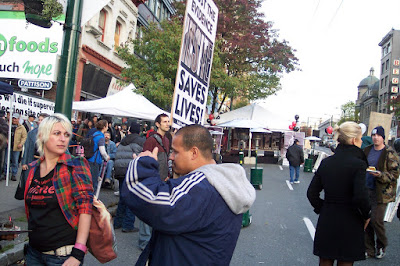 I have an insight. The block party Insite supporters held yesterday afternoon was an attempt to embarrass freshly re-elected Prime Minister Stephen Harper. Insite supporters -- particularly the Portland Hotel Community Services Society executives and staff who operate Insite -- don't want Harper to shut down this space where junkies in Vancouver can drop-in to shoot-up. The Harper government is appealing a court decision that the nurse-supervised drug injection site must be kept open because it is a health service to which drug users have a right. The use of tax dollars to finance a cocaine and heroin shooting gallery is enough to make Harper shiver in his trademark sweater vest.

On Thursday, a party was held on the street in front of Insite on the Downtown Eastside in support of keeping the facility open. It was a party against the Conservative party. 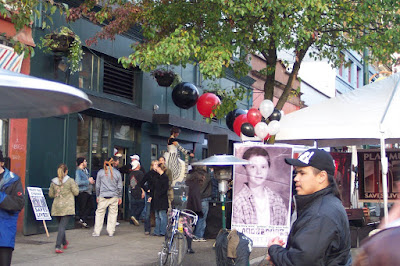 The dark green building in the background with people clustered around the door is Insite.

A white tent at the block party in front of Insite housed speakers blasting recorded music and a huge poster with the words, “Play Music Not Politics”. A band was scheduled to play but the cops put a stop to it, as organizers did not have a permit for this rush hour street party.

Don’t ask me how Insite supporters believed they could get public sympathy by suddenly disrupting traffic on the 100 block Hastings St. during rush hour, just after 5 p.m. That’s a six lane — four lanes of moving traffic and two parking lanes — major commuter artery. A witness who arrived early at the party, says there was some traffic flow until police arrived and shut down the entire block, apparently for safety reasons. 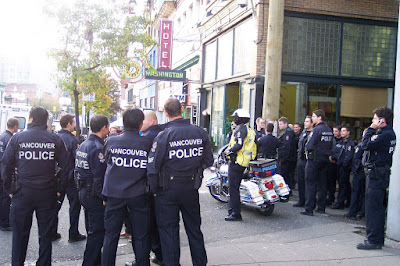 Photo: A cluster of Vancouver Police stood on Hastings, a few doors east of Insite, watching the party.

The City of Vancouver had refused the Portland Hotel Community Services Society a permit to hold the party on Hastings at rush hour, but organizers did so anyway. Breaking the law may not be a way for the Portland Hotel Community Services Society to convince Prime Minister Harper, who ran in this month’s federal election on a ‘law and order’ platform, to allow them to continue to operate Insite. (Insite needs the Harper government to renew it’s exemption from the law, an exemption granted temporarily by a previous Liberal government since Insite provides a place for injection of illegal drugs.) 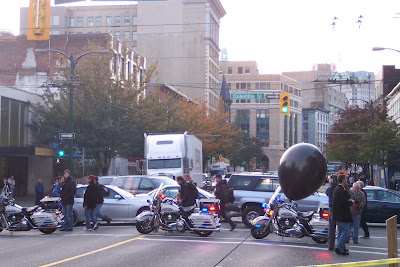 Photo above: Motorcycle cops parked on Columbia St. to prevent cars and buses from traveling onto the 100 block Hastings once the party got going.

Anyone who listens to Vancouver talk radio knows that inconveniencing commuters by blocking traffic on streets and bridges is becoming an issue. This year commuters have demanded to know why police blocked them during rush hour on the Lions Gate bridge for a film crew and for hours on the Second Narrows for somebody threatening to commit suicide. 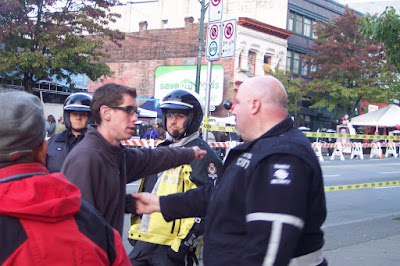 Photo above: Vancouver Police were preventing pedestrians from using the sidewalk on the south side of the 100 block Hastings, across from the party. 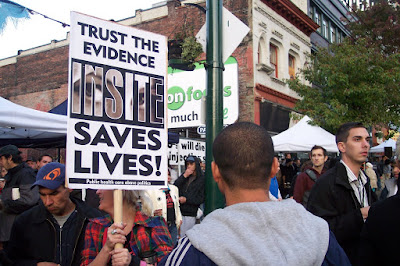 There were lots of placards saying, “Trust the Evidence.” Such slogans are often used by Insite supporters despite the fact that the evidence for Insite has been mixed. Margaret Wente of the Globe & Mail, Canada’s most liberal national paper, wrote a column in July, “We Still Await the Scientific Proof of Harm Reduction’s Success“, outlining just how mixed the evidence is. 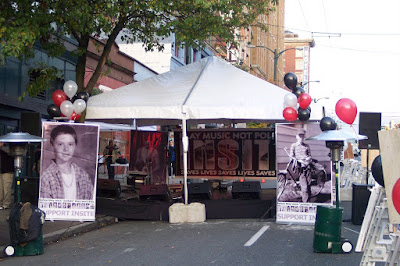 The propaganda at the party was effective. There were several black and white posters of children, posters the size of bus shelter images — one of a kid posing with his bicycle, another of a kid posing for what appeared to be a school photo — with captions, “Before they were “junkies” they were kids.” 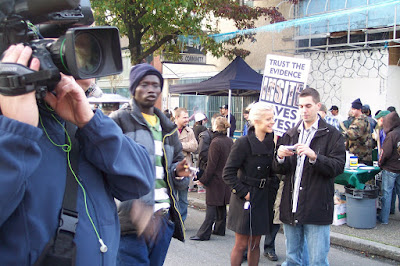 This party was a made-for-media event, like so many political events on the Downtown Eastside. Lots of media had obviously been notified of the event as they were everywhere taking photos and interviewing people. The mainstream Vancouver media is sympathetic to Insite and tends to accept the prepared scripts they are fed. As media personality Pia Shandel, who opposed the supervised injection site said while a host on CFUN radio, the Vancouver media seem to make up their minds early on to support Insite.

Once media are invited to a political protest on the Downtown Eastside, a crowd is attracted by giving out free food. A couple of hundred poor people lined up at yesterday’s party waiting to be served free burgers. Potato chips and pop were given out later. The line-ups may have been longer if the monthly welfare checks hadn’t come out Wednesday. 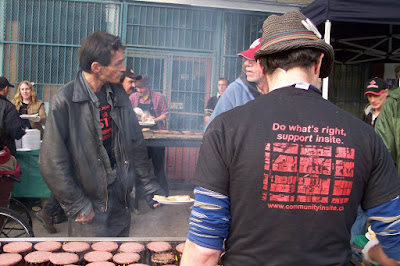 Note the bars on the windows of the shop in the background. About 20 years ago, I was in a bus going up Main St. and an American tourist said to his fellow travelers in a New Jersey accent, “What do you notice about this city? No bars on the windows.” Now there are bars on most shop windows. Cops say “drug sick” people needing fix are pulling many break-ins. 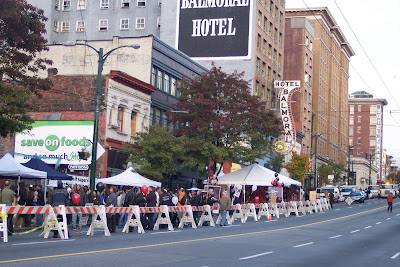 Photo: As soon as the party started on Hastings St., numerous police moved in and limited it to a couple of lanes. Police refused to allow any traffic onto the opposite lanes, apparently for safety reasons.

Vancouver Police spokeswoman Jana McGuinness said police and other City of Vancouver staff had discussions with the PHS Community Services Society about a less disruptive spot to hold the event. "We offered them a permit on a location 100 feet away on Columbia [Street] where they could party all night if they wanted to", McGuinness said. But these events are above all about attracting public attention to a cause. Disrupting Hastings St. traffic during rush hour, resulting in an inevitable clash with police, could draw more attention and get more press than a party on a side street.