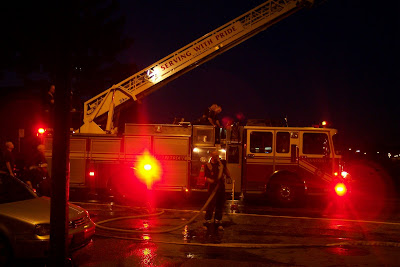 A spot where a homeless man was living in an alley off Main St. between National and Prior Streets -- just north of the Pacific Central train and bus station -- went up in flames Thursday night around 10 p.m. "A homeless man and his girlfriend got into a fight and she came back and set his place on fire", explained a man standing behind the boarded up American Hotel next door watching the firemen.

Five fire trucks (one pictured above), a white van marked "Fire Investigation", an ambulance and at least three police cars arrived in the alley. A pedestrian said the smoke was about 50 feet in the air before the firemen hosed the site down. "The firemen had it out in no time", he said.

A dark-haired, forty-something, mustached man of Middle Eastern descent stood in front of the nearby T-Rex corner store on Main St. -- Muslims run that store -- talking to two other men as they looked in the direction of the smoke. "I hope some bums died," he said. "I hope all those bums died." 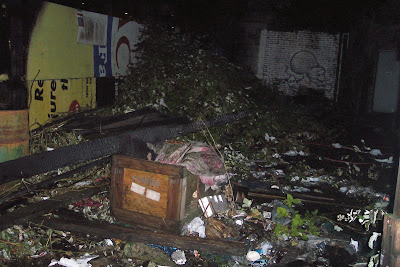 Remains of homeless man's place after firemen hosed it down. 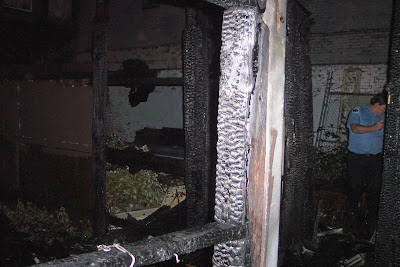 Fire Inspector examines scene of fire. A charred post from the fire can be seen in foreground. 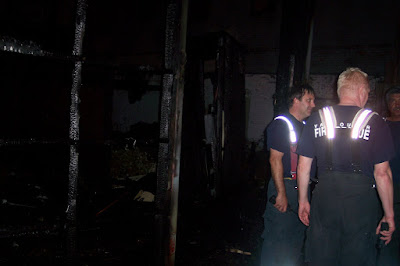 Firemen chat after Inspector finishes up. 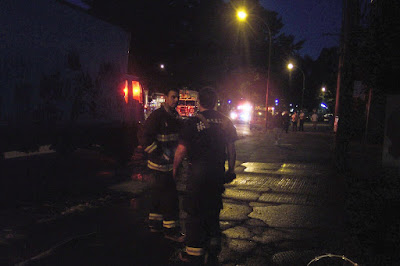 Firemen chat in the alley.

Firemen Return on Saturday to Site of Fire
Posted by reliable sources at 12:13 AM 2 comments: Links to this post