At roughly 2:30 p.m. on Sunday afternoon, there was a collision involving three vehicles -- two red and one blue in the photo above -- on Main St. at 1st Avenue just past Burger King. (The date stamp on my camera wasn't set so the date on the photos is wrong.)
There did not appear to be life-threatening injuries.
Posted by reliable sources at 10:10 PM 1 comment:

Cats Do the Darndest Things 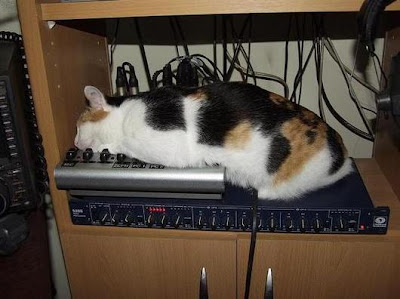 Tonight Art Bell guest hosted the late night radio show Coast to Coast, a show which has a loyal following amongst the unemployed on the Downtown Eastside who don't have to get up in the morning.
The retired Bell, who has a bit of a cult following, hosted from his home radio studio in the Philippines. [He is fascinated, he said on a previous show, that technology actually allows him to broadcast half way around the world and sound like he's in the U.S.] When he guest hosts, he treats his fans to photos of his Filipina wife forty years his junior, his growing daughter, and his cats.
Cats do the darndest things.
So do older men. A die hard Art Bell fan on the Downtown Eastside has said several times that he lost respect for Bell when he took up with a woman who was almost a kid. He reminded me that Rick, a guy who goes to Carnegie off and on, had done the same thing. Rick had shown him photos of his life in the Philippines. He showed a photo of a wife he'd had there; she was nude. He showed a photo of her cousin; she was nude. He showed a photo of the maid; she was nude.
I know Rick too. He told me that both of his young wives had left him after he brought them to Canada. "As soon as their feet hit the tarmac at the airport," he told me, "consider them gone."
Posted by reliable sources at 10:08 PM No comments: 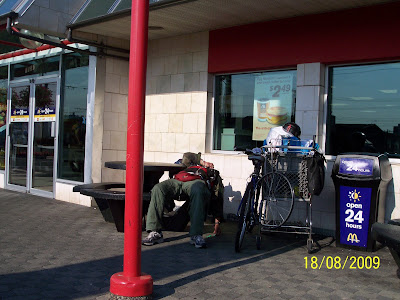 Above photo: a homeless man sleeps in the sun this morning in front of Mcdonald's restaurant at Main & Terminal.


Mcdonald's restaurant deserves a humanitarian award for the tolerance they have shown for the homeless.
At one point an older manager, a Chinese guy with his head shaved bald, did start insisting that the homeless move their shopping carts away from the front door. "We can't have this," I heard him tell them, asking them to at least park their shopping carts in the parking lot. There was one homeless guy who he asked not to come back because he was parking his shopping cart inside the restaurant. That homeless man sat in the dining area of Mcdonalds one evening and trimmed his hair and put on shaving cream and shaved. The staff didn't notice.
Eventually the manager who was setting limits left. The new managers tend to be teenagers who are not equipped to take on the street people. And they're just earning a few dollars between high school classes, so they really don't care. 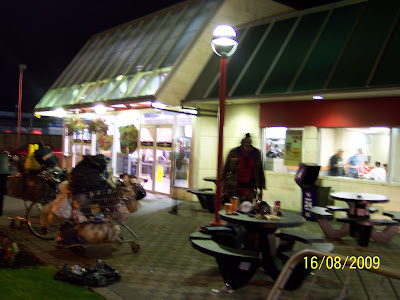 Then the City of Vancouver made things worse by setting up a homeless shelter across the street from Mcdonalds. That added to the congregation of homeless people hanging out at the tables in front of Mcdonalds at night, smoking cigarrettes and pot and parking shopping carts filled with stuff pulled from garbage cans beside the door. But many of the regular homeless people at Mcdonalds are not actually linked to the homeless shelter. Those places are more for the homeless-light. The hard core homeless just keep living outside like they've always done.
But Mcdonald's has a plan. A staff person mentioned that they are going to renovate, turn the front patio area into a veranda. It's difficult to get a shopping cart onto a veranda. The veranda will have tables with umbrellas. (The current front patio once had umbrellas but they were stolen. The tables behind Mcdonalds also once had umbrellas but they were stolen too, and later Mcdonalds removed those tables because they were having problems with the homeless and street people hanging out back there all night.)
The homeless will still be at Mcdonalds though. The cheap coffee with a free refill is too good a deal to miss. Most of the regular homeless don't panhandle but they sometimes pick up a customer's discarded coffee cup and take it up to the cashier for a free refill. Some do buy food; the guy sunning himself in the photo bought a burger and an ice cream sundae yesterday.
So many businesses in Vancouver have to work around Vancouver's homeless and drug addicts. It's a real headache trying to use the washroom at Mcdonalds because they now lock the door and you have to buzz and buzz and buzz until the busy staff hear you and let you in. Before that they tried to discourage drug addicts from using their washrooms by installing special lighting that made it more difficult for them to see their veins.
Major renovations at Mcdonalds will begin very soon. In addition to a veranda, they will be installing fireplaces and internet wifi.
Posted by reliable sources at 11:38 AM 3 comments: 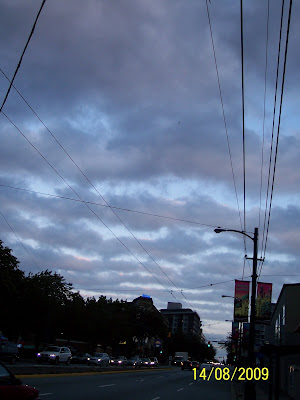 Kingsway at Broadway
After the heat wave, it was cool for a few days. I thought summer was over.
Posted by reliable sources at 9:24 PM 2 comments:

Photo: William Simpson, a homeless man punished by City of
Vancouver for being linked to this blog
When agreeing to sponsor Vancouver’s 2010 Winter Olympics, Acer, a marketer of laptop and netbook computers,would have been aware of well publicized complaints against the City of Vancouver of human rights abuses targeting computer users and bloggers. Acer has therefore been asked to pull out as a sponsor. The request was made in July to Acer’s public relations representives Stella Chou and Henry Chang in their “Branding Division”, and to Andrew Chang in the Shareholders Division, by an advocate for a member of the City’s Carnegie Community Center in Vancouver’s Downtown Eastside. There is documented evidence that City bureacrats overseeing Carnegie Center, just a few blocks east of the 2010 Olympics media center, are persecuting bloggers and users of public computers.
By entering into a sponsorship agreement essentially endorsing the City of Vancouver and it’s Olympic Organizing Committee [VANOC], says the Carnegie member, Acer is contradicting it’s advertising claims: “Empowering People….Our long-term mission is breaking the barriers between people and technology….” Under two successive City managers — Judy Rogers who was both City Manager and the City’s representative on VANOC, and Penny Ballem who is the current City manager and VANOC representative — the City of Vancouver has been accused of "maliciously" creating barriers between residents of the low income Downtown Eastside and technology.
These barriers, including banning homeless William Simpson from the City's Carnegie Centre for daring to be linked to this blog, have been reported on numerous posts on this blog.
Posted by reliable sources at 1:56 AM No comments: 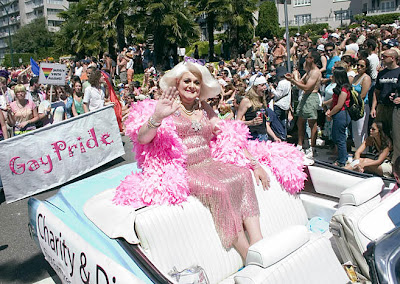 The Gay Pride parade was this weekend. Pride goeth before a fall.
At a time when it looks like gay rights are so alive, they are on the brink of being murdered. Look at the demographics.
Gays, and the liberals who support gay rights, are not reproducing. To sustain itself, a culture must have 2.11 children per family. History shows that cultures with a fertility rate below that die out. In 31 countries across Europe, the birth rate is a deadly 1.38 per family. In Canada, we are one percentage point below our ability to reproduce our current culture: 1.6 children per couple. The German government, the first to officially acknowledge the problem, recently issued a statement admitting that Germany is past the point of being able to reproduce their culture: "It will be a Muslim state by the year 2050."
Most western countries are making up for their low birth rates by having an open door policy toward immigration by Muslims. When they arrive, Muslims reproduce at about 7 times the rate of liberals.
Islam has no pretense to supporting gay rights. Or women's rights. Don't say, 'The Catholic church is just as bad." They aren't. Compared to most Islamic clerics, the Catholic pope is the blow up doll at the head of the gay pride parade. And besides, the Catholics are becoming outnumbered by Islamists too, according to a recent statement by the Vatican.
The problem with many gays and liberals is that they are too pc to talk about this. The last time I outed Islam on this blog, I got a comment from a woman at the Lorie Krill Co-op on Cordova St. on the Downtown Eastside, calling me "racist". Islam is not a race. But the facts never deter liberals falling over themselves to accomodate the Islamic religion which will do little to accomodate them.
Look at what happened to Mark Steyn. Young Muslims in Canada arranged for him to get dragged in front of the Human Rights Commission for daring to write about Muslim demographics and the threat they pose to the western way of life. Steyn quoted a Muslim sheik who said that the Islamic way of life will prevail because Muslims are reproducing "like mosquitos", compared to western liberals. Don't ask this sheik what he thinks of gay rights.
Like Steyn, Coast to Coast radio has the courage to report on this issue. That's where I came across the above link to a video.
I almost forgot to mention the Netherlands. What ever happened to that liberal-to-the-max country we've all heard about? I read about a gay man who thought the U.S. was homophobic so he moved to Holland; he moved back to the U.S. where he found it much safer to walk down the street as an openly gay man. He said Muslims in Holland were attacking gays. In 15 years, the population of the Netherlands is expected to be 50% Muslim.
Instead of sneering at "breeders", gays should consider doing more breeding themselves.
Posted by reliable sources at 10:55 PM 2 comments:

Bill Good's Colleague Hit by Cyclist while a Pedestrian

In July, I was listening to the Bill Good show and he was talking, along with his panelists Bill Tielman and Norm Ruff, about the dangers of bicyclists on the sidewalk.
Good said "a colleague" of his was severely injured when, as a pedestrian, she was hit by a cyclist.
I was glad he brought it up. I've been criticized for blogging about bicyclists on the sidewalk. One commenter asked if I'd actually ever seen a pedestrian hit by a cyclist. I haven't but I've seen close calls. So I was glad Good was willing to talk about how it does happen and can cause serious injury.
Ruff pointed out that pedestrians in Victoria have been placed at risk by a bicycle path which pedestrians have to cross. But Good pointed out that at least those pedestrians have a choice. They can look both ways.
One thing I like about Critical Mass is that they cycle on the street, not the sidewalk.
Posted by reliable sources at 1:24 AM 2 comments: