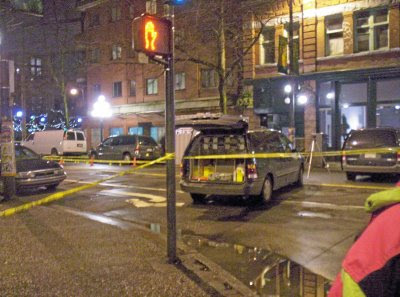 In what police are saying was a targeted hit, a man was shot in a minivan tonight near Pigeon Park at Carrall & Hastings St. A young woman in the van cradled the dying man in her arms screaming that she couldn't believe this was happening.

People at Pigeon Park, where drug users and dealers hang out, reported hearing six shots. A male neighbour who had been sitting in his room listening to the radio told the media that he had heard seven shots. Alberta, a thirty-something aboriginal woman who lives at 334 Carroll St. in a suite just over the site of the shooting, told a DTES Enquirer reporter that she heard seven shots. It appeared to Alberta that the victim had been shot multiple times in the head. It was too late to help him as "he was already dead", she said solemnly. Alberta saw a woman with him, whom she assumed to be his girlfriend.

Alberta said the victim was caucasian. The word is that his name was Steve.

Vancouver Police blocked off Pigeon Park and a nearby alley, as well as the Cambie Hostel pub [known by locals as the Cambie Hotel] a couple of blocks west, with reams of yellow tape and several police cars. They weren't allowing any new customers into the Cambie pub, a blow to revenues on a bustling Friday night. A few clusters of people who were already inside the pub were allowed to remain.

The police were not saying whether there was a connection between the heavy police presence at the Cambie Hotel and Pigeon Park. But witnesses say they saw police cars racing to the Cambie Hotel shortly after the shooting. 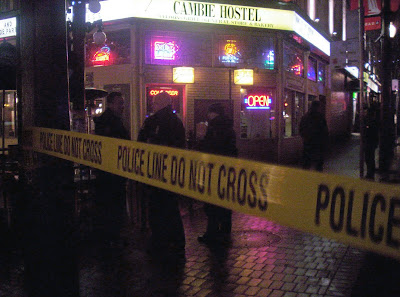 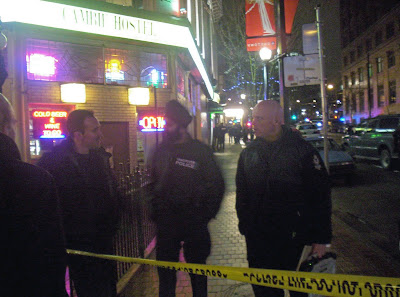 A female police constable standing beside yellow crime scene tape at Columbia & Hastings, told photographers to be careful where they stepped as blood was streaming down along the curb. I looked down and sure enough, there was water mixed with blood flowing past my foot toward the sewer grate. The body was apparently lying on the street near the Columbia Street entrance to the old Sunrise Hotel on Hastings St. I couldn't see it from where I was standing behind the yellow tape at around 8:00 p.m. but, according to Alberta, it was not removed by the coroner's black vehicle until 12:30 or 1:00 am.
The windshield of the van was cracked where it had been penetrated by bullets. There were also bullet holes on the side of the van.
The shooting occurred at roughly 6:30 p.m. and at 8:00 p.m. the police crime scene van (see the van with the open rear door in the center of photo at top of page) was processing the crime scene.
Posted by reliable sources at 9:29 PM 7 comments: