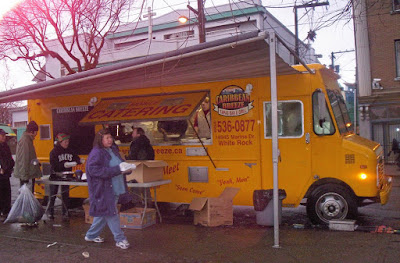 At noon today, about a thousand people showed up for the film industry's annual outdoor Christmas dinner at Oppenheimer Park on Vancouver's Downtown Eastside.

Turkey is what Downtown Eastsiders are left with since the povertarians stopped the trickle of film industry wealth that reached the poor. A few years ago, for example, there was a Claude Van Damme film on the Downtown Eastside and the film company gave people whose lives were severely disrupted $100 each. That doesn’t happen any more.

Povertarians at the Downtown Eastside Residents Association and some of the housing co-ops made deals with the film companies, supposedly “on behalf” of people whose lives are disrupted. A guy who has lived for years at a housing co-op on Powell St. explains that the film industry has at times given his co-op $1,500, selling out residents whose lives are disrupted by filming, particularly residents who have apartments at street level. They get nothing now. Except a headache from sleep cut short and noise, lights, and constant exhaust fumes from idling trucks. In exchange for the donation from the film industry, the Co-op appoints a "film liaison" to handle complaints from residents. Any resident living in a small suite, putting up with filming just meters from their bed and fumes coming through their only window, is no longer individually factored into the production costs of a film. To the film companies, they seem to be nothing more than, to use an expression made popular on Coast to Coast radio, "useless eaters".

A few years back, the film industry was printing the newsletter for the cash-strapped Downtown Eastside Resident’s Association. Not surprisingly when residents came out to a town hall meeting to air grievances about the film industry, DERA’s then Executive Director, Terry Hanley, opened the meeting by asking them at the beginning of the meeting to “be nice” to film industry representatives. It was at this meeting that one resident recalls first learning that turkey was what the film industry would be 'giving back' to the community; compensation to individual residents seemed to be off the table.

DERA also arranged for the film industry to hire Downtown Eastside residents, which translated into their friends and political allies, not to mention Hanley’s brother and common law husband. Such deals became a substitute for the film companies giving a few bucks compensation to residents sucking tail pipes or being kept up late by the film crews. I could go on for pages about this. But what it has all boiled down to now is:

So I went for turkey. My friend and I stood in the line up today – it had stopped raining by this time but the ground was thick with mud -- for about 10 minutes. The dressing was tasty, lots of mushrooms in it. It’s the best stove-top dressing I’ve ever tasted. With the turkey (I was pleased to get some dark meat), there was gravy and a heap of cranberries, mixed corn and carrots, and mashed potatoes. The meal, served in styrofoam, was steaming hot.

The guys handling the turkey and other hot food inside the catering trucks – there were several catering trucks -- were working their asses off. I noticed it. Another guy noticed it too. “See how fast those guys are moving,” he said.

There were also two clothing tents, one for women and one for men. The line-ups to the tents were long. It was about a 40 minute wait. Some of the people – correction: many of the people – in the line-up were rough. They were occasionally yelling at one another while grabbing clothes inside both the men's and the women's tents.

The clothes were decent. One long time Downtown Eastside resident pointed out that the drug users will sell them for crack or something. Staff gave everyone a black garbage bag to fill with clothes. That was your limit. A women who came out of the women's clothing tent with a full bag told me that there was one man in there -- all the rest were women -- and he was the 'enforcer', telling women, "OK, you're bag is full. You have to go now." He was mostly targeting the women who were getting unruly, she said. She is not a drug user and got a few sweaters, and dressy cardigans which she intends to wear if she finds a job next year. She also got lots of second hand socks. "I really need socks," she said.

A middle-age man got the first pair of dress pants, grey, that he’s had in years. And he got a pair of black wing-tip shoes.

As people stood in the line-up for food or clothing, volunteer staff walked back and forth handing out raw carrot and celery sticks, pretzels, Nestle’s lemonade coolers, Coke Zero, oranges and bananas, even tailor-made cigarettes. They also gave out brand new winter hats and gloves, and plastic baggies containing, shampoo, toothpaste, and soap. One woman, the same one who needed the socks, was happy to get some shampoo. She also got a black hat with stripes that had a “Dollar Giant” tag still on it.

The staff and volunteers working at the event were all fresh-faced, middle-class. They were pleasant and patient, even when people in the line ups occasionally lost their tempers and started yelling at one another.

There was a live band too. Not a band hamstrung by political correctness either. They were daring to sing songs containing the words “Christmas” and “Jesus”. Like the song that goes, "Go tell it on the mountain, that Jesus Christ is born." I would bet that most of the people in the workers and underclass people in the line ups were raised Christian. Most were white or native, with the occasional Chinese person.

The Turkey tactic has worked. Most Downtown Eastside residents no longer ask for compensation for having lives disrupted by the film industry. They seem resigned to the fact that the povertarians who run their lives, have shut down any semblance of a free wheeling market in the film industry. They line up for turkey in the drizzle and the mud. Don't get me wrong; there are still some old cases being fought. Like the one of a woman who felt that the filming of "It's a Girl Thing" starring Kate Capshaw -- with a guy who looked like Steven Spielberg, helping to direct the actresses -- turned into an abuse thing. And there's the case of the woman made ill by a generator during the making of a Honda commercial on the 100 block Powell St. Let’s just say she sees Muriel Honey at the Vancouver Film Office not as Santa, more as Freddie Kruger.

The fact that Downtown Eastside residents are supposed to be satisfied with turkey as payment in kind for film disruptions is not subtle. In one of the above complaints, a woman was told in writing by an industry spokesperson that the industry hosts a turkey dinner every year to give back to the community. She resents the assumption by the film industry that junkies and low lifes are her "community" and she does not believe that lining up with such an unpredictable crowd at the park in the rainy season should be a substitute for compensation. When residents of Kerrisdale were irritated by fake snow dropped on their houses, a female resident complained about it to an news television crew but added, "Of course, we got compensation." Kerrisdale residents were not told to line-up for turkey.

A guy dressed up like Santa was standing near the band at the turkey dinner today. But Downtown Eastsiders know the truth; there is no Santa in the film industry. He's been hijacked in his sleigh.
Posted by reliable sources at 2:03 PM 2 comments: Links to this post