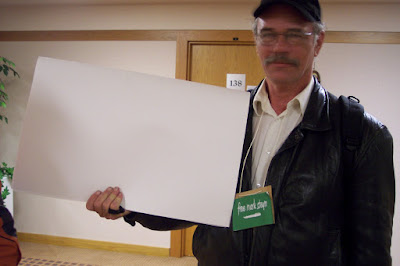 The signs protesters carried at the courthouse said it all by saying nothing.

They stood in front of the Provincial Courthouse in downtown Vancouver this morning to protest erosion of freedom of expression as the hearing of author Mark Steyn opened at the B.C. Human Rights Tribunal. Steyn was called to the Tribunal on a charge of hate speech. The protesters say the Tribunal poses a danger to free speech. In fact, they say the B.C. Human Rights Tribunal -- where truth is not a defense -- has morphed into Canada's "thought police".

Trouble started for Steyn, a newspaper columnist, when MacLeans magazine published an almost 5,000 word excerpt from his book, America Alone. In the book, Steyn examines the Muslim population explosion in the western world and concludes that Islam will be dominant in many Western countries in the foreseeable future. Three Muslim law students in Ontario saw the excerpt from Steyn's book in MacLeans and, along with Naiyer Habib and Dr. Mohamed Elmasry of the Canadian Islamic Congress -- Elmasry is known for pushing for sharia law in Ontario as well as for announcing that it is acceptable to murder Israeli civilians -- filed a complaint against Steyn.

At it's peak, the protest attracted 30 - 40 people. They made their point: Steyn is not alone.

Related story: 'Five Feet of Fury' Blog Introduced as Evidence at "Islamophobia" Trial at BC Human Rights Tribunal
Posted by reliable sources at 5:50 PM 1 comment: Links to this post