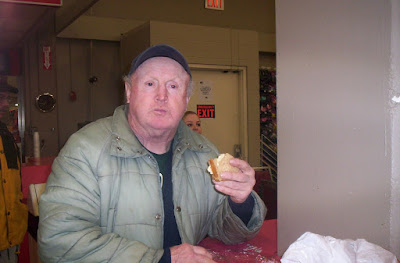 Photo:  Barry Miller having a sandwich at the Army & Navy food floor around Christmas 2007
“If you see Kelly, tell him to pay me back the $20 he owes me or I’ll slash his tires,” Barry Miller said, laughing.   I told Kelly.  That was a month ago.  A few days ago, Kelly dropped by Solheim Place apartments on Union St. and buzzed the manager to ask if Barry was around.  "Ooooh, he's gone," the manager replied in a solemn voice which Kelly imitated for me today.  “Maybe he's gone to Ontario; I'll try again in two or three days,” Kelly told the manager and took off.
Shortly after that, Kelly heard a group of guys talking about the “man with the cats” dying.  That was Barry.  The word was he'd had a heart attack.
So when Kelly spotted me today, he stopped on his bike and said, "You know Barry, the guy I owed the twenty bucks to?  He’s dead!”  Kelly's voice cracked.
A neighbour of Barry's at Solheim Place has since said that he had a heart attack at roughly 5:30 in the morning and was dead by the time the ambulance arrived.
The last time I talked to Barry was about a week ago when I spotted him sitting on a bench in front of a bank on Main St. at Pender.  I believe he said during that conversation that he was 69 years old.
Barry enjoyed his cats, his Canada Pension, and going to restaurants.  I remember him counting down the years and then the months until he got his Canada Pension.  With his pension, he saw life as Easy Street.  He didn't go to Carnegie Center as much.  He ate in restaurants more.  He told me he liked the Slocan restaurant up at Nanaimo and Hastings.  Kelly mentioned today that he'd seen Barry at the Slocan with a "big spread" in front of him.
“It was death by knife and fork,” said Kelly, shaking his head.  “I’ve seen it so many times.”
I thought of Barry buying coffee at McDonalds and using half a cup of cream.
Barry fed his cats well too.  Even before he got the pension, he would buy them a case of Fancy Feast, the tiny tins, every month at the Tisol Pet store on Main at 12th.  And he always had lots of dried food for his cats too.
He used to have coffee at McDonald’s with Kelly who had been raised as though he were one of a litter of cats. Kelly's parents in New Brunswick had a huge number of children and would sometimes give one away to a relative who visited.  He said that practice wasn’t unusual were he grew up.
Barry had been a drinker but quit a few years back.  He had helped the Downtown Eastside Residents Association drink the Metropole Hotel into the ground.  DERA owned the hotel until it went bankrupt and when Barry would drop in, staff from DERA would be drinking in there and would offer him beer on the house.
Barry liked the DERA crowd.  He thought Terry Hanley, the former Director of DERA, was attractive.  He would occasionally ask people, “Do you ever see Terry Hanley around?”, with a twinkle in his eye.  He had always gotten along ok with her spouse too, Eric.  He used to drink with them.
Up until his death, Barry was working for DERA cleaning and painting suites when people moved out.  The building he lived in, Solheim Place, was run by DERA.  He told me that once when he was doing some work for DERA, the current Director Kim Kerr told him,”I’m gay”, as though he thought it might be an issue with Barry.  Barry responded, “I’ll know where to go if I ever want a bl*w job."   Kerr laughed.
Two other people Barry liked were Margaret "Muggs" Sigurdson and Bob Sarti, who had a house in Strathcona and had helped run Carnegie Center for years.  He used to drive out to Fort Langley with Muggs in her truck to help pick up a load of eggs. They would bring them back to the Dug Out drop-in center at Powell & Columbia; low income people could buy a carton of large eggs there for about $1.75. Then Muggs and Bob moved to Hornby Island.  The Dug Out no longer sells eggs.
Like many Downtown Eastsiders, Barry had a less than stellar start in life.  His mother had died in childbirth so his aunt raised him for about a decade.  Then he got passed around. That was in Ontario, near Orillia.
Barry got in trouble a lot when he was young, but he wasn't a hardened criminal.  The whole time I knew him, he was living a straight life.  When he was young, he and a pal were picked up by the cops in Ontario,  and one of the cops flicked his finger on Barry's eyeball, on purpose. It hurt bad, Barry told me.  He lost the sight in that eye.  But you wouldn't know that from looking at him.
Barry knew Downtown Eastside Enquirer bloggers and contributors but he never read a blog in his life. He would just shoot the breeze with us in McDonalds while he drank his coffee.
When I heard today that Barry had died, I thought of his cats.  If there was any unfinished business in his life, it would be finding a good home for those cats. He loved his cats.
Posted by reliable sources at 8:55 PM 4 comments: Links to this post