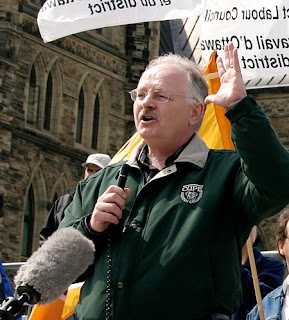 Paul Moist, President of CUPE National, sent a letter to striking Vancouver civic workers on July 23, 2007 in which he stated:

“In short, we want fairness and to date this has not materialized….”

With the language Moist was using, he could have been a secretary.

For years, a former secretary to two CUPE Presidents in Vancouver has been saying all she wants is “fairness” in her grievance against CUPE. In Dec. 2002, CUPE called police on this secretary after she exposed the fact that for years, CUPE had been operating what she alleged was a “non-union sweatshop” inside Local 116. Vancouver Police Constables M. Herrmann and K. Ng – who did not even have jurisdiction at Local 116; the RCMP did – visited her apartment and left voice mail instructing her that CUPE wanted her to silence herself about unfair labor practices.

The secretary left CUPE with two glowing letters of reference but she knew too much. She had seen secretaries working for CUPE Local 116 -- the Local was staff exclusively with non-union secretaries -- fired after speaking up about excessive workloads, chronic verbal abuse from a CUPE Vice President, and the fact that CUPE had reneged on a promised pension. She saw a 12-yr veteran secretary take CUPE to court for a pension. She saw a long term book keeper fired when she became less efficient after getting cancer. "I was a credible witness corroborating other women's stories," says the secretary, "and CUPE didn't like that." Another secretary who had attempted to pursue the issue of unjust firings got a Cease & Desist letter, the secretary recalls. She believes that CUPE sent police to her home to throw a scare into her, to weaken her resolve.

“CUPE members across Canada applaud your solidarity and your resolve.”
Paul Moist, in his letter to members

The secretary has written to Paul Moist, President of CUPE National, in Ottawa to ask that he settle her case. She would like Moist to reverse what she alleges was CUPE's "hypocritical stance" in the case, that stance being that writing to labor leaders about unfair labour practices is “evidence” of criminal activity. She would like him to have CUPE lawyers remove from the police Property Office the letter she sent to CUPE National in 2002 about unfair labour practices inside Local 116, as well as the one she addressed specifically to Barry O’Neill at CUPE BC, and the one she addressed to Jim Sinclair of the BC Federation of Labor.

And while CUPE is taking back letters filed in the Police Property Office, the secretary says they should also take back one written by Paul Cooke, Vice President of CUPE Local 116 (he left not long afterwards after considerable in-fighting.) Cooke had written the 2002 letter on union letter head and sent it to a long list of people – but concealed it from the secretary -- falsely claiming that the secretary had merely been a “part-time” worker at CUPE and had never mentioned excessive workloads before leaving. She has pay stubs confirming that she was a full time secretary. And she has a handwritten letter from Paul Cooke apologizing for “working you too hard”.

Not only would the secretary like Paul Moist to acknowledge that writing to labor leaders about unfair labor practices is not criminal conduct, but that it does not constitue the specific offence of "harassment". The police report reveals that the secretary, at the request of CUPE, was investigated for “WORKPLACE HARASSMENT” and the case labeled “CLOSED”. The secretary attempted to have this defamatory phrase adjacent to her name on the police computer expunged but the VPD responded in writing that it would remain on file for “99 years”. The secretary then wrote to O’Neill and Sinclair informing them that as long as this label remained on her record, she would ensure that it remained on their public record as labour leaders -- as they should be protecting people speaking up about working conditions, not smearing them. After that, something mysterious happened. She discovered that the offence for which she had originally been investigated, the one at the top of the police report she had obtained through Freedom of Information shortly after CUPE called police, had been altered. It was now, “HARASSMENT/OBSCENE COMMUNICATION”. It was fraudulently altered roughly a year after the case had been labeled “CLOSED” by the VPD. She wants this retroactively altered “offence” to be removed from police files.

The above issues are just two of several that the secretary has been asking CUPE for years to deal with in a fair way.

“There are many issues . . .and these must be dealt with in a fair way….”
Paul Moist, in his letter to CUPE members

Before and after the police complaint was lodged against her, the secretary says that CUPE never made even one attempt to deal fairly with the issues. A CUPE lawyer, Ian Aikenhead had contacted her in writing and she had responded in writing, only to discover later that her polite response letter had been filed in the police Property Office. (She also discovered through the police report that Aikenhead had released to police confidential information – albeit exaggerated and misrepresented -- that he had in his possession as a result of his wife, Catherine Aikenhed, being an NDP-appointed public representative to a dental regulatory body.) When she asked O’Neill and Sinclair to personally ensure that her letters addressed to them were removed from the police Property Office, they completely ignored her. They had ignored her prior to the police complaint as well. CUPE leaders resort to smear and intimidation, in the secretary's view, instead of dealing with the real issues. “I often hear CUPE use the term ‘good faith’ in bargaining,” says the secretary, "but in my case I’ve never seen CUPE show any sign of good faith”

“Lower Mainland employers have to date refused to bargain in good faith and to address the real issues….”
Paul Moist, in his letter to CUPE members.

The secretary says she would like Moist to put a stop to CUPE’s double standard: one standard for how dues-paying members deserve to be treated and a much lower standard for how their own employees deserve to be treated. She believes that resolving her case would be a good starting point.
Related article: CUPE Strike Haunted by Secretary Scandal
Posted by reliable sources at 2:50 PM 4 comments: