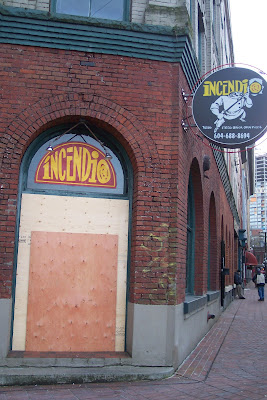 
Incendiary Incendio. A former tenant in the rooming house at 90 Alexander St. above the Incendio restaurant, has questions about the fire on Jan. 6 at 5 a.m. that left all tenants evicted. It took the fire department “about an hour to arrive” – even though there is a fire station just a block away at Main & Powell.

Tenants had evacuated, knowing that this was a real fire. Although it was not unusual for the fire alarm to go off in the building, says a tenant, "This time the sprinkler system went off." One tenant recalls waiting and waiting outside for the firemen. "I was thinking, 'They'll be hear in a minute or two'; then I'd think, "Another minute or two, then they'll be here."

Fire damage in the kitchen of Incendio. Photo from UrbanDiner.ca

It has been pointed out that in an emergency situation, people waiting for help can have a different sense of time; they can feel that things are taking longer than they really are. But even if we take that into account, the reaction time here seems uncharacteristically slow for the Vancouver Fire Department. Any Downtown Eastsider can tell you that if a junkie overdoses on the street or somebody is having a heart attack, the VFD fire trucks often beat police or ambulances to the scene.

Even when firemen did arrive, it seemed to the tenant that they “loafed around”. Firemen tried to force open a door and then they gave up; then they walked over to a fire truck and did something there. There seemed to be “no leadership”, says the tenant. “Nobody was giving orders.” The resident described how frustrating it was to watch these firemen. “It was like, “Put out the fire! It’s over there! We all know where it is!”

Tenants believe it was a little too convenient for the offshore owner that the rooming house burned unchecked for some time before firemen dealt with it. "That's a valuable building", said a former tenant, as if that explained everything. The tenant noted that some of the suites in that building have a “million dollar view” of the harbor. The landlord would have been unable under the law to evict the current lower income tenants and 'go condo' in the rapidly gentrifying neighborhood. A one bedroom suite with a spectacular view was housing a couple and renting for a mere $850 per month, according to tenants. 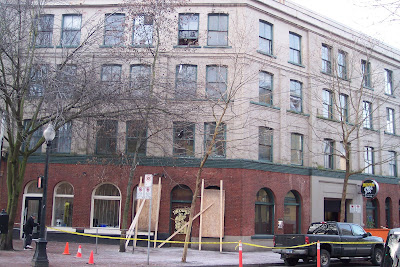 Several tenants would like to move back into the rooming house. They've been told that it will be six months before renovations are finished, but they doubt they will ever be allowed to move back in. The fire was allowed to burn long enough that the landlord may be in a position to circumvent laws that curb the practice of evicting lower income tenants, doing renovations -- workmen were there yesterday doing renovations -- and then jacking up the rents. “If there is structural damage and the floors are burned,” says a former tenant, “they can say, “It’s not safe, you have to move out.” Indeed, all tenants were told to move, even though only the suites immediately above the restaurant stove, where the fire is believed to have started, were damaged.
Photo from UrbanDiner.ca

A former tenant is under the impression that after the fire started in the Incendio stove, "it went up the pipes and burned out the suites overhead". But the tenant is convinced that if firemen had arrived promptly, fire damage would have been minimal, and a mass eviction would have been unnecessary.

"Do you think maybe they weren't called right away?", I asked, suddenly catching on to what the tenant had been insinuating. The tenant would say only that there were questions. "I'm trying to let it go", said the tenant, who was a little stressed during our conversation, less than a week after being evicted and scrambling to move into a seedy hotel room on Hastings.

This isn’t the first time, firemen have had to deal with a fire in the Incendio stove. I recall walking a friend home about a year ago and finding the air in that area a bit smoky; there were particles in the air. The next day, my friend told me that the wood stove at Incendio, the one used for cooking pizza, had caught fire. The fireman were able to get the fire contained more quickly that time.

The tenant says of the latest fire. “There are ways to make a fire happen eventually; you can avoid maintaining the stove.”

"But Incendio doesn’t own that building," I said, thinking that they would have nothing to gain from the eviction of tenants. "No, they lease", said the tenant. "They'll get fire insurance. That business wasn't doing very well."

There is no solid evidence of wrongdoing against anybody. Not against the operators of Incendio, not against the offshore owner, not against the fire department who may or may not have been called promptly. It's just that evicted tenants can start thinking along the same lines as fire insurance investigators: “Where there’s smoke, there’s fire.”