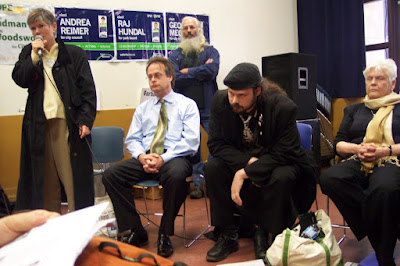 Ellen Woodsworth [COPE], pictured above holding the microphone, was elected as a Vancouver City Councillor with 45,877 votes in yesterday's Vision-COPE election sweep. When Larry Campbell was mayor, Woodsworth was one of the COPE councillors who he couldn't work with, saying they were "too ideological".

Woodsworth wants to make buses free in some areas of Vancouver, not a pipe dream when you consider that Seattle has free bus service downtown. Also, she wants to make Vancouver a one fare zone, not a two fare zone which tripped up Mayor-elect Gregor Robertson and left him with a $173 fine.

As a Councillor from 2002-2005, Woodsworth pushed for a "Peace" conference to be held in Vancouver. The Peace conference turned out to be a thinly veiled Hate-Israel conference. 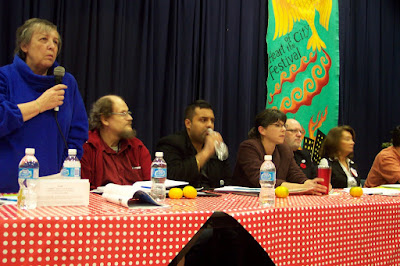 Audrey Laferierre, pictured on the left with the microphone in the above photo, did well for an independent candidate for councillor: 4,196 votes.
Posted by reliable sources at 1:18 PM 6 comments: Links to this post