On the Downtown Eastside, this is a Burlgar 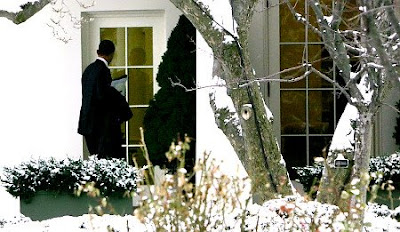 The door to the White House is on the right of the photo.  But Obama was trying to go through the window.  And bloggers aren't letting him live it down.
(Photo sent by dag of covenantzone.blogspot.com)
Posted by reliable sources at 8:40 PM 4 comments: Links to this post

Save on Meats Closing 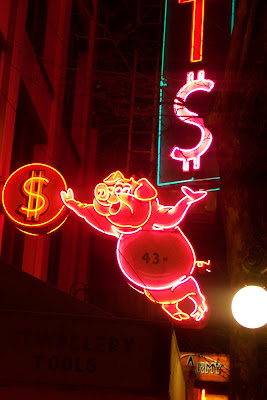 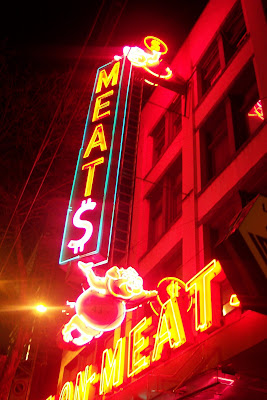 Save on Meats, the cheap meat store at 43 W Hastings on the Downtown Eastside, will be closing on March 14, 2009.
I was in there this morning buying some shaved Black Forest ham and I asked the clerk why they were closing.  "The owner's retiring," she said.  That would presumably be the owner who was pushing for curbs on thieves via an '8 strikes your out' law.  Or was it 12 strikes?  I just remember it was some ridiculous number of strikes.
The owner is 77 years old, which serves as a reminder that meat laced with nitrates doesn't kill everbody.  He's operated Save on Meats since 1957.
A friend once described Save on Meats as the meat version of Sunrise market, where things are brought there to sell when they're no longer totally fresh but are still ok.  But he shopped there a lot and was wondering this afternoon if any other store would open "to replace it".
I heard that a person who used to work there said that on welfare day, they would bring out all the old meat to get rid of it.  But another friend said "That's how all businesses work."
Don't get me wrong, I never got sick on meat I bought at Save on Meats.  I'll miss it.
Posted by reliable sources at 12:08 PM 2 comments: Links to this post

Labels: BC, Downtown Eastside, Hastings St., Save on Meats

Tea without a Pee

You would think that a place serving as much liquid as Waves coffee shop would have a washroom. I am with a couple of friends in Waves coffee shop at Hastings & Richards this evening, and there are no washrooms.  None.
Customers are going out to the back alley to pee.
Washrooms are a chronic problem at this particular Waves.  Either the men's or the women's is usually out of order.  They have lightweight toilets that appear to have been designed for private homes not for a busy restaurant.  The Waves on Main St. near Hastings has restaurant calibre washrooms.
If it weren't for the washroom problem, this would be a good internet cafe.
Posted by reliable sources at 1:37 AM No comments: Links to this post