Puppet Board Members Not Showing Up for Meetings 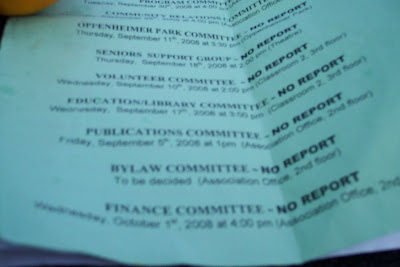 Remember the puppet Board that Jean Swanson and Paul Taylor installed at Carnegie in June, as a strategy for ensuring that pro-democracy incumbent Rachel Davis would not get elected? At the Sept. 4th Board meeting at Carnegie, President Matthew Matthew announced that this new Board couldn’t get things done because too few of them were showing up at Committee meetings to get a quorum. The front page of both the August and September Board meeting hand-outs shows just how lax the new Board is:

At the August Board meeting, only the Finance Committee had a report for members .

Not only Committee meetings but the monthly Board meetings have not proven to be magnets for the puppet Board. One onlooker reported that “quite a few of them” were no shows at the September 4th meeting.

At one point during the discussion, the contentious issue of Roberts Rules surfaced. Carnegie Director Ethel Whitty noted that Matthew Matthew, in his role as Chair, was allowed to vote at meetings when a tie vote needed to be broken. As she spoke, Matthew Matthew offered to check a point in Roberts Rules. He put his hand on his copy of Roberts Rules and was about to open it when Whitty interjected, “No. No.” That elicited laughter from Board and audience members.

The laughter stemmed from the fact that it was well known that when Rachel Davis was on the Board, she wanted Roberts Rules followed. Wilf Reimer and other members also insisted that Roberts Rules be followed so that people could speak at meetings without being cut off. Jeff Sommers, a Board member at the time, did not agree. “Do you need a rule to piss?”, Sommers asked at two separate meetings. Finally, after a meeting in which Paul Taylor responded to a question by Rachel Davis with "Shut Up!" and to Wilf Reimer with, "Up your ass!", the City of Vancouver sent three copies of Roberts Rules to Carnegie. You can bet that Whitty, who is the City’s representative on the Board, has not mentioned to her bosses at the City that she is discouraging the Chair from opening that book.

Now that there aren't quorums at committee meetings, it seems that the committee process is simply being skipped. Despite the fact that there was “No Report” from the Volunteer Committee for August and September, a major decision to prohibit tipping of kitchen volunteers has been made. On Sept. 5th, I noticed a sign on the cash register in the cafeteria stating something to the effect, “Tipping of concession workers is prohibited. Management” The tip jar had been removed. “That’s why there’s no volunteer today,” a staff person said, referring to the fact that the cashier was working alone with no helper to dish up food and keep the line-up of hungry customers moving fast. The kitchen volunteers are dirt poor, usually getting welfare, and count on tips. But Whitty, who gets $104,000 salary -- and presumably she was included in the huge raise City managers got a few months back -- has stated openly to members that she does not believe volunteers should get tips.

The failure to get quorums at meetings is no doubt working out nicely for Whitty. She likes meetings to be short. At an important election recount meeting this summer, despite members being clearly upset, Whitty sneaked out early. She just disappeared. Poof!! Like 'I Dream of Jeannie'. Members also recall a Community Relations meeting last year when Whitty had to answer for the undemocratic barring of elected Board member William Simpson from Board meetings. Whitty was upset that she had been inconvenienced. "I can't do" long meetings, she insisted twice.
Posted by reliable sources at 11:26 AM 1 comment: Links to this post