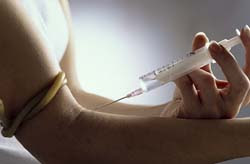 As Insite spokespersons listed key benefits the facility brought to the community, they trotted out the same old, same old. They claimed that Insite had resulted in the reduction of discarded used needles in parks and school yards.

What did they leave out? The fact that there are hundreds of needles discarded on the Downtown Eastside every day but people are paid to quietly walk around and pick them up. That's the main reason there is a reduction in needles on the street.

In fact, in a previous post, the DTES Enquirer pointed out that one needle-collector told us that he had picked up about 200 needles discarded in a pile of garbage in an alley less than a block away from Insite.
According to a Dec. 8, 2006 Vancouver Sun article, "Our Four Blocks of Hell", 8,300 intravenous syringes were found within four blocks of Insite over a three week period by an independent City work crew. The work crew, accompanied by bylaw and police officers, had been assigned the task of cataloguing litter and garbage in the four blocks surrounding the intersection of East Hasting and Columbia St. -- that's the intersection closest to Insite -- from Aug. 14 to Sept. 8, 2006. That means 8,300 people chose not to walk the short distance to Insite. They instead chose to toss their needles on the ground or in the garbage bin in the alley.

Spokespersons are lying by ommission when they cite fewer needles on the streets as a key benefit of Insite. Rule of thumb: if people lie about one thing, they are likely to lie about another.


For the real story on the massive number of discarded needles being collected daily on the streets of the Downtown Eastside, see "Vancouver's Other Olympic Sport".

Thinking of donating to United Way? Read Fraudulent Evidence Found in United Way Police Complaint on the Downtown Eastside Enquirer
Posted by reliable sources at 10:48 AM 8 comments: Links to this post