Has Jim Sinclair been Naughty or Nice? 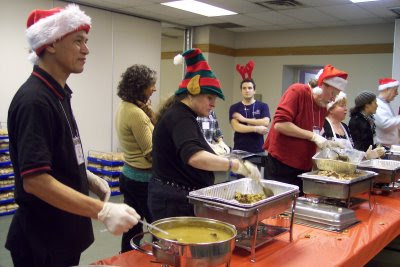 On Christmas Eve at 5 p.m. labour unions hosted their annual Christmas dinner at the Martime Labour Hall in East Vancouver. The dinner was advertised on a poster at Carnegie Center as being for the "less fortunate", but everybody who showed up was welcomed. 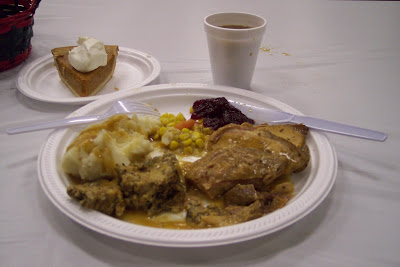 The hall was full, and a special City bus repeatedly circled back to the Downtown Eastside to transport more people to the dinner. 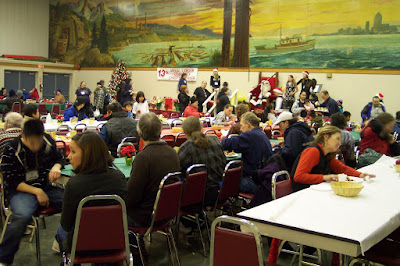 The dinner consisted of turkey, dressing, gravy, a mixture of corn and carrots, cranberries, mashed potatoes, and a bun. People donating their Christmas Eve time to dish up food from the steam trays were warm and friendly, exuding Christmas spirit -- not a grouch among them. Volunteers were walking around the tables in the hall offering people pumpkin or apple pie for dessert, and coffee, pop or juice to drink.

A few people brought plastic containers to take an extra dinner home. The servers willingly filled them up. The first thing they ran out of was dressing.

Santa turned up too, with gifts for children. And there was live music too, although one guy eating dinner thought the singer ruined John Lennon's Christmas song. "He should give silence a chance."

There was also a clothing room with donated clothing.

The line-up into the dinner wasn't as long as last year, which according to Downtown Eastsiders was the case with other free Christmas dinners on the Downtown Eastside. That could be the reason many adults leaving the Maritime Hall after dinner were given whole pumpkin or apple pies to take home, along with the usual bag of groceries containing a couple of large potatoes, two large carrots, and a can of baked beans. 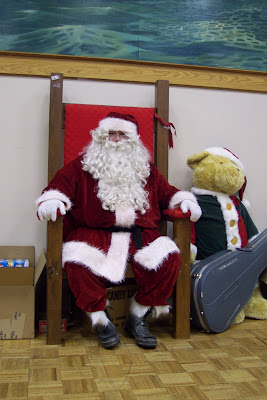 Jim Sinclair, President of the BC Federation of Labour, was there as he is every year, wearing a Santa hat. Sinclair looked thinner than last year, less paunchy. He was enthusiastically serving food from a steam tray along with union elves. (He is fourth from the left in the top photo.) He later walked around the hall and chatted up the volunteers. Sinclair didn't chat Santa up though, so he never got asked whether he's been naughty or nice. You be the judge: Evidence-tampering in CUPE police complaint
Posted by reliable sources at 6:49 PM 3 comments: