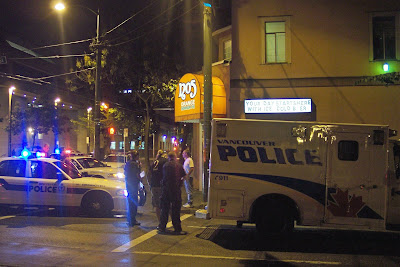 A woman was assaulted at the No. 5 Orange Showroom Pub on Wednesday night around 11:15 p.m. A twenty-something male witness standing on the sidewalk outside the No. 5 at Main & Powell St. on the Downtown Eastside said the woman had been "beaten up". A female standing with him agreed, saying, "I know her".

Eight to ten police cars, a few of them unmarked, along with a police paddy wagon were parked outside the No. 5 after the incident. One of the police vehicles was a black SUV that a Downtown Eastside resident said he recognized as belonging to the Gang Unit. He also said he had seen one officer at the scene carrying "a bean bag gun". The Gang Unit has identified the No. 5 Orange as an establishment that they keep an eye on. 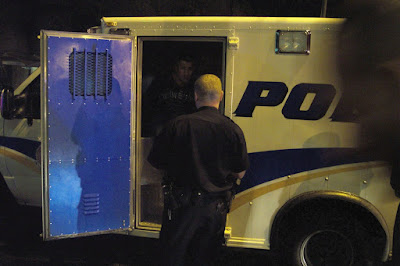 Police officer speaks to the male suspect in the paddy wagon. 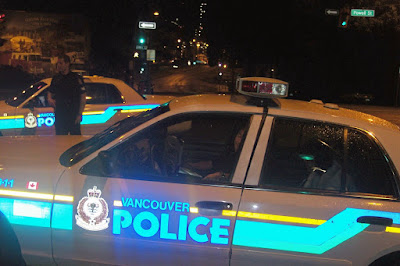 The alleged victim was sitting in the back of this police car "giving a statement" to police, according to a man standing on the sidewalk with a woman who said she knew the victim. 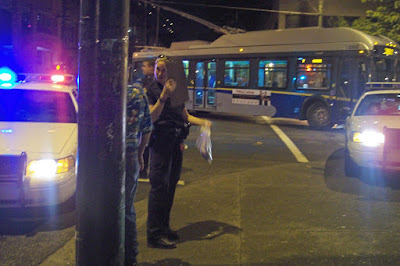 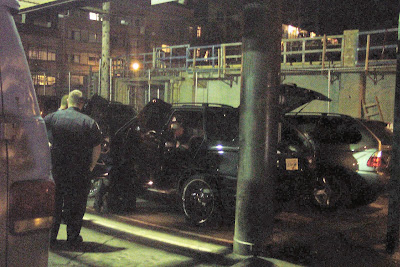 Several police officers search the suspect's vehicle in the No. 5 Orange parking lot.
Posted by reliable sources at 12:19 AM 4 comments: