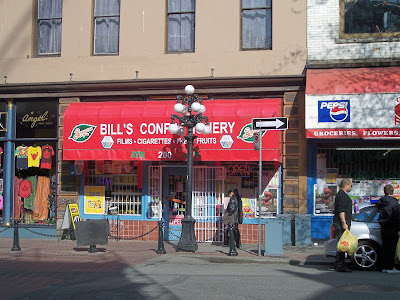 Charles and Faye didn’t tell their long time customers that they were selling Bill’s Confectionary, the corner store at Carroll St. and Powell. That’s because you can lose customers when you sell a business and they didn’t want the “diehard customers” to leave, says a source who knows them personally.

It’s not that customers didn’t know Bill and Faye were leaving. It’s just that Charles told a few long time customers that he and Faye were going on a cruise. “Maybe you won’t want to come back after that cruise,” a customer joked. Charles just laughed.

Charles and Faye, a Chinese-Canadian couple, ran Bill’s confectionary for a couple of decades. Charles’ father, Bill, had run it before him when it was located across the street. The store was on the Downtown Eastside, across from the Gassy Jack statue where Gastown starts. So they had a real mix of customers. They had poor people, some of whom could get credit there and pay up on welfare cheque day. And they had better dressed customers dropping in from the bars, restaurants, and galleries in Gastown, or out walking the tiny designer dogs they lived with in the condos being built as the neighborhood is gentrified.

For a few months now other Chinese people, a couple of women and a man, have been supposedly substituting for Charles and Faye. One long time customer repeated asked if Charles and Faye were coming back. He recalls the Chinese man working the cash register assuring him, ""Yeah, yeah, they're coming back. They're on a cruise."
Lately customers have been getting some straight answers. One of the women working in the store confirmed this weekend that the business has been sold.

What became of Charles and Faye? They took a trip to South America to attend a family wedding. They also bought a house which Charles says he might flip. He is thinking of starting another business. He readily admits that he “misses” running the store.
I wonder how much Charles and Faye got for the store. I knew a guy who worked on security in Glory Foods next door, the one run by Koreans. He says the Korean woman there offered Charles a million dollars for his store and he just laughed.
Posted by reliable sources at 11:15 PM 1 comment: Links to this post