The membership voted at a Special Meeting at Carnegie Center this evening to hold a recount of the June 5th election results for the Board of Directors. The vote was tight: 16 members voted "No" and 19 voted "Yes".

Even though those who wanted the recount won, they felt they were being denied procedures which would ensure fairness.

Brian B. wanted the Teller's Report from the last election released. The Teller's Report would reveal how many votes each candidate had received. Voting on a recount of the election results, he said, "presupposes that a count has already been published and to my knowledge that has not happened." And it was not going to happen, Board President Matthew Matthew responded: "We don't do a teller's report."

James Arkinstall requested that the recount "be scrutinized by uninvolved people, that means people who were not nominated." Matthew told him he was "out of order".

Ruth, another member who volunteers in the Carnegie Computer Room, took the microphone to say that she too wanted the ballots counted by "uninvolved people". Mathhew told her as well that she was "out of order". "You're not being fair to us", Ruth responded.

Tara, a woman who has in recent months begun to come to the neighbourhood to volunteer in the Carnegie Learning Center, asked Matthew to "read out the specific provision that says ballots cannot be counted by independent individuals."

Matthew responded that according to the Carnegie Voting Procedures he had in front of him, for 21 years the ballots have been "counted in a manner identified by the Chair." They are to be "counted by whoever the chair chooses", he explained.

Another member, a thirty-something man who did not identify himself, told the Board what the membership wanted. "They want a recount but they want it done out in the open. And if you can't figure that out.... What is this? The Bush administration you've got here?"

Matthew said that since the members had yet to vote on whether they wanted a recount, "I haven't identified any manner [of chosing who will count the ballots] 'cause that hasn't come up yet." After members voted for the recount though, Matthew laid down the law. "I'm the one who decides", he announced.

Matthew said there would be three tellers chosen by him to perform the recount, and that he favoured choosing people "from opposing sides". It would later become obvious that he ignored his own advice.

Ethel Whitty, Carnegie Director
Rolph Auer, Secretary of the Board

Neither Whitty or Auer were neutral tellers. Both have demonstrated antagonism in the past toward Rachel Davis, a popular Board member whose defeat in the last election prompted calls for a recount.

Actually, there couldn't have been a worse choice for teller than Whitty. She has been implicated in fraud against more than one Carnegie member. She blatantly lied on CBC Radio, claiming that Board member William Simpson had been banned from the Carnegie [and Board meetings held there] because he posed a Work Safe risk. As recently as this month, Whitty has been implicated in the manufacture of witnesses, fraud, and undemocratic processes in the banning of a female Carnegie senior for daring to talk back to a man with a ten year reputation for verbally abusing members. [We hope to get more details of that case so that we can report further on it.]

James Arkinstall insisted that a teller is "supposed to be somebody from amongst us...the audience". He would later add, "If you wanted to prove you were acting in good faith, you wouldn't get the same people to count them [the ballots]."

As a third teller, Matthew's first choice was Board member Stephen Lytton. Lytton declined based on the fact that, "I was one of the elected members". There was loud clapping in support of Lytton's decision.

Brian B.offered a suggestion for choosing the third teller, that "this mysterious third person be from those who didn't get elected." That advice was not taken by Matthew.

Matthew then chose Diane Wood. Wood is not a neutral party. When Rachel Davis and William Simpson began speaking on Co-op radio about undemocratic processes at Carnegie that saw homeless Simpson banned from the Carnegie Center two weeks after being elected to the Board and then libelled in the Carnegie newsletter, Wood was part of attempts to offset such commentary, rather than addressing it directly. Carnegie arranged for Co-op radio to give them their own show on which they were never, of course, criticized. Diane Wood co-ordinated the show. When Matthew selected her as a teller this evening though, she declined.

Matthew's final choice for teller was Craig, a current Board member. Craig was not a neutral party either. Even before being elected, Craig had spoken at a Board meeting against efforts by Rachel Davis to change policies which had left a homeless Board member banned and libeled. Rather than taking a principled stand on the recount and supporting requests that a teller be chosen from members in the audience rather than from Board members who had benefited from the original ballot count and were therefore in a conflict of interest position, Craig stated that the membership must get to a point where they can exercise basic "trust".

The three selected tellers scurried out of the Carnegie Theatre to count the ballots from the last election in secret. Whitty never returned, even though she is paid by the City of Vancouver to sit on the Board and monitor procedures.

Craig did return to announce that the recount had been completed and the original results "confirmed". Even Craig's closing statement, though, hinted at bias against those who had called for a recount: "Hopefully, this will settle this matter and we can go on to some disputes about more substantial things."

It was surprising not that the recount was a sham that reinforced the disrespect the Board and staff seem to hold for the membership, but that a recount was even held. We have the Vancouver police to thank for the recount. As the meeting progressed, word came into the Carnegie theatre that police were confiscating belongings of homeless people in Oppenheimer Park. So Jean Swanson -- who calls herself a homeless advocate but has gained a reputation as an anti-democracy activist due to her history in relation to the banning of a homeless Board member from Carnegie -- and a few others including her husband and a Board member left the meeting before the vote on whether to hold a recount occurred. Had these people stayed, it is possible that the pro-recount forces would not have won. But it was ultimately Swanson and her ilk who won. The anti-democratic tendencies they have nurtured at Carnegie prevailed.


[Thanks to those present who recorded the proceedings for DTES Enquirer bloggers.]
Posted by reliable sources at 7:40 PM 12 comments: Links to this post 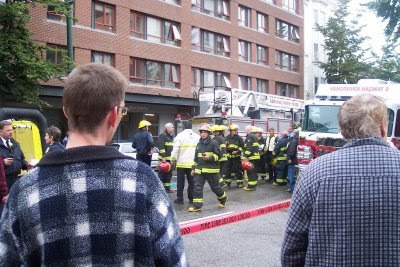 Thursday afternoon at around 4 p.m. several fire trucks and two HAZMAT Unit trucks arrived at the Lori Krill Housing Co-operative on Cordova near Carroll on the Downtown Eastside. Residents left their apartments and clustered outside. The man on the right in the above photo said he would never leave his apartment again for a fire alarm; he was annoyed that he had been standing on the street for some time and firemen wouldn't allow him back into his apartment. 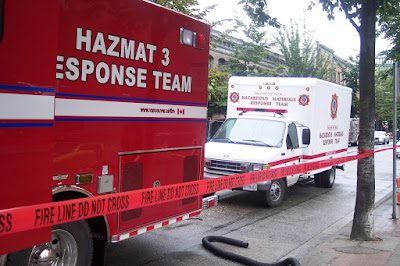 Firemen and police were tight-lipped about what had happened. One man walking past on the sidewalk joked, "I wonder whose meth lab it was." A resident of Lori Krill said that they have been making an effort to "get the druggies out" of the building.
The photographer who gave the DTES Enquirer the above photos said that the Vancouver Fire Department's Co-ordinator of the Hazmat exercise, Dan McClelland, requested that photos not be taken. The photographer had heard the resident on the right of the top photo complain to McClelland. McClelland claimed that residents wanted "privacy". The photographer responded that it is a "Charter right" to take photos on a public sidewalk -- and then took McClelland's photo. 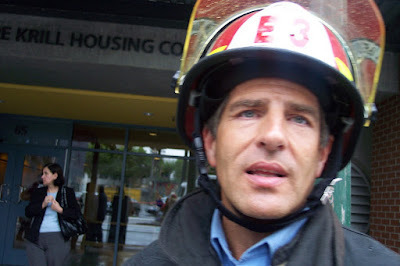 Posted by reliable sources at 5:15 PM 5 comments: Links to this post

There will be a Special Meeting at 5:30 p.m. today in the Theatre of the Carnegie Center. Members will vote on whether to have a recount of the June 2008 election results. Members have been demanding a recount.

Board President Mathhew Mathhew has announced that at least 30 Carnegie members have to show up to make the election valid. But Carnegie member, B.B., alleges that number is "arbitrary". Sort of like the arbitrary 150 signatures, Mathhew said members had to get on a petition before the Board would consider a recount.

Even if a recount is granted, it is unlikely that the results will be trusted by members. The election was just too sloppy. One member has pointed out that the ballots are photocopied and that anybody could photocopy a few more, add some Xs, and substitute these ballots for others. This could have been done over the two months that have passed.

Some members such as B.B. say that the request for an election recount is actually pre-mature, that members should first demand that the Board release the results of June's election. To date, Carnegie Board of Directors and Carnegie Director Ethel Whitty (who is given an automatic seat at the Board) have avoided releasing the Teller's Report from the June election that would reveal how many votes each candidiate got. Members have been waiting for two months for this report. The Board is required by Roberts Rules, which was adopted by the Board, to make the Teller's Report public. But fair elections have never been a strong point of the Carnegie Board or Whitty; they after all colluded with the locking of an elected Board member out of the building for a year, denying him access to Board meetings.

Carnegie member, Jim A., who is usually not politically active, is one of several members asking about the Tellers Report. He asked Whitty why the Tellers Report was being concealed from voters. She responded that it was tradition not to release it.

A primary reason behind the demand for a recount and for copies of the Teller's
Report is that Rachel Davis, a popular candidate amongst members who frequent Carnegie on a day to day basis, didn't get elected. Davis was the only incumbent who had spoken up -- and continued to speak up -- about the fact that homeless man, William Simpson, was banned from the building two weeks after Carnegie members elected him to the Board last year. Whitty told him he would not even be allowed into the building for Board meetings.

Paul Taylor, Editor of the Carnegie Newsletter who was forced to retract libelous commentary about the homeless Board member, and Jean Swanson, a paid organizer with the Carnegie Center Action Project on homelessness, stacked the election with pals who were instructed to vote for a slate which didn't include Davis. Low income Carnegie members who had not planned to run, report that they were instructed by Taylor or Swanson to show up at the election as they were going to be nominated. Taylor and Swanson were manipulating the poor.

Swanson's stacking, though, also involved bringing unfamiliar faces to the Carnegie election and getting some of them elected to the Board. These virtual strangers will now be making decisions affecting the lives of regular users of Carnegie. So much effort expended by homeless advocate Swanson so that incumbent Rachel Davis, who was speaking up about the banning of an elected homeless man and the banning of other members without just cause, would not get re-elected. Here is one of the few election results clearly revealed: Jean Swanson is not an anti-poverty activist, she is an anti-democracy activist.
Posted by reliable sources at 11:32 AM 2 comments: Links to this post