Colin Hansen is rewarding sexual harassment. That’s how a former SFU student views a visit by BC’s Minister of Economic Development two weeks ago to the Downtown Eastside, to deliver $13.3 million in cheques to the Simon Fraser University Center for the Contemporary Arts. The cheques delivered on March 28th are part of a promise by Premier Gordon Campbell last year to give $49.5-million in special funding to the School for Contemporary Arts on the Downtown Eastside.

When delivering this special funding -- over and above regular funding -- Hansen made no mention of the Center’s special history, twenty years of evading investigation into the alleged operation of a sexual harassment ring of male professors. It is a history that has been festering much like that of native residential schools abuse or pedophile priests festered for decades.

The sexual harassment ring that operated in the Center for the Contemporary Arts involved an element of fraud according to previous reports by the woman who dropped out of the Center for the Contempoary Arts when she lost her ability to concentrate after years of sexual harassment. She has also spoken previously about the persistent lesson taught by Visual Arts professors in the sexual harassment ring -- Jeff Wall, Greg Snider, and David McWilliam -- all of whom had spouses and children, about how to handle a female spouse: deception.

SFU President Michael Stevenson did not show up to accept the $13.3 million cheque from Hansen. Stevenson is well aware of the controversy surrounding his hustling of public dollars for the Center for the Contemporary Arts while concealing it’s alleged history of operating as a site for professors to “harvest” female sex partners. “It’s affecting his reputation, and well it should”, the woman says. “He should resign over the way he’s ducked this issue like it’s a game.” Stevenson sent Warren Gill, Vice President for University Relations, to pick up the cheque from Hansen. “A spin doctor”, the woman calls him. 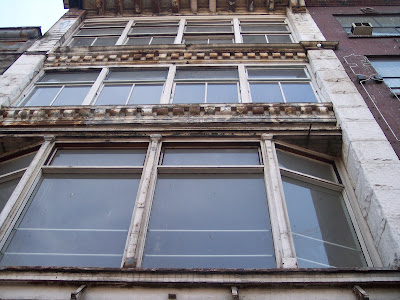 Hansen presented the cheques from an outdoor podium at a construction site for new Center for the Contemporary Arts studios on Hastings St., directly across the street from the Center’s old visual arts studios (middle building in photo above) where sexual harassment had been rampant for years. But Hansen’s ‘out with the old, in with the new’ hoopla has not caught on with the woman who dropped out due to sexual harassment. “I have trouble even walking by there”, says the woman who lives in the low income Downtown Eastside neighborhood. “As the years go by, it doesn’t get any better. I make a point of not looking at the building.”

At the time he turned over the $13.3 milllion cheque, Hansen encouraged donors to support the Center for the Contemporary Arts' private fund raising campaign. A press release from Hansen’s office praised SFU Chancellor emeritus Milton Wong and businessman Michael Audain for making “leadership” donations. Leadership is not a word the woman would use.

Posted by reliable sources at 8:57 PM 3 comments: Links to this post