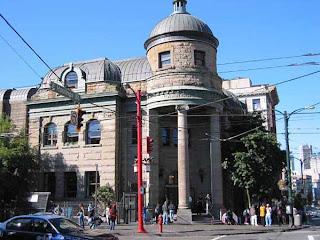 Downtown Eastsiders have long viewed the closing of the doors of Carnegie Community Centre for a staff meeting from 9 'til noon every welfare day -- the third Wednesday of each month -- to be an excuse for staff to have a schmoozefest. There may be some truth to that.

One staff person reported that at the last meeting, staff kept digressing into gossip instead of focusing on business. Gossip about what? "That blog," the staff person explained, referring to the Downtown Eastside Enquirer.

So now that we know what was going on inside Carnegie's locked doors, what was going on outside? The usual. A throng of people -- those who don't drink or drug on welfare day and may even be broke as cheques sent via mail don't arrrive until late morning -- was hanging around on the front steps waiting for the Centre to open. Just because it's welfare day, doesn't mean people aren't interested in checking their e-mail on a public computer or using the library.
Posted by reliable sources at 2:25 PM 5 comments: Links to this post