"Don't Believe the Truth": Oasis for Poor during Olympics to be Photo-Op for Media 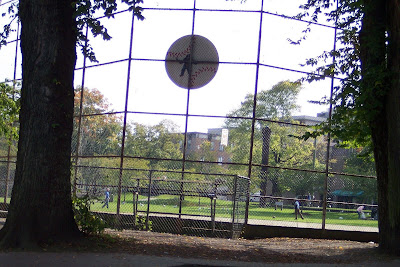 The nerve. Ethel Whitty, Director of Vancouver’s Carnegie Community Center who has established a reputation for banning poor and homeless people from Carnegie quicker than you can say “Nixon’s enemies list”, has now announced that she is a prime organizer of a “refuge” for the poor and homeless at nearby Oppenheimer Park. It is called the Oasis Winter Festival and will occur during the 2010 Winter Olympics.

Whitty announced the Oasis Winter Festival in her Director’s Report at the Carnegie Board meeting membership of Carnegie Center at the Sept. 4 meeting of the Board of Directors. The Oasis will be held on Vancouver’s Downtown Eastside for 7-10 days in February 2010, during the Winter Olympics. A trial-run Oasis will be held in 2009.

“We’ll set up two large tents,” Whitty wrote in her Director’s Report. “One tent will be a source of nutritious food and beverage for participants and one for art activities and entertainment. ….” Whitty, who knows the poverty game as well as any Olympic athlete knows their game, is aware that a sure way to draw a crowd to any event on the Downtown Eastside is to offer free food. The other tent at the Oasis will be “for art activities and entertainment.” 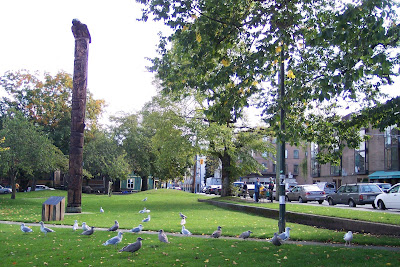 Totem pole in Oppenheimer Park where the Oasis Festival on the Downtown Eastside will be held. Photo taken Oct. 2008.

“The intention”, Whitty writes in her report, “is to give homeless and poorly housed residents of the Downtown Eastside a chance to receive support from the community at a time, during the Olympics, when they will otherwise be the subject of media scrutiny and tourist interest.”

That’s not the real intention though, according to poverty industry watcher Dag Walker. The intention is to create “a sea of poor people” in plain sight of the media. “It’s not nearly as effective if the media just sees a few homeless people here and there,” Walker explains, “It’s more effective to attract a huge number of the poor and homeless to a small space.” Whitty and her povertarian partners will essentially be telling the media, ‘Don’t look at the elephant on the table’, but they know that the media scouring the notorious Downtown Eastside during the Olympics in search of stories will take photographs of this large congregation of poor people, photographs that will be transmitted around the world. The povertarians are arranging a media event, a photo op, with the intention of embarrassing the government globally.

The message transmitted through the global media will be the same as that regularly transmitted by the povertarians through the local media: “Poverty is an out of control problem on the Downtown Eastside and the government must direct more money toward this problem.” More money directed toward the Downtown Eastside means more money for povertarians who make their living in the lucrative poverty industry here.

Box for discarded needles of drug users attached to the fence of the baseball diamond at Oppenheimer Park. Photo taken Oct. 12, 2008.

Anyone unaware of Whitty’s record of human rights abuses targeting the poor and/or homeless — she was even caught feeding fraudulent “evidence” to a CBC Radio interviewer about the reason for the barring of homeless man, William Simpson, from Carnegie after poor people elected him to the Carnegie Board — could get the impression from her Director’s Report that she cares about the poor: “This event will be ongoing everyday and will provide a refuge and a comfort zone where participants can be entertained or take part in organized art activities arranged by those who know them best; their fellow community members.” Arranged by their fellow community members? Most of the people working at Oasis will be well paid unionized povertarians who, at the end of their shifts on the Downtown Eastside, can’t get out of the neighborhood fast enough.

Just look at the groups Whitty lists as being recruited to operate the Oasis: “We hope the community partners will include Carnegie Centre staff from Oppenheimer [Park] and the Outreach teams, Aboriginal Front Door, VANDU [Vancouver Area Network of Drug Users], VCH, Pivot, DEWC, Community Arts Network, Gallery Gachet, etc.” The overwhelming majority of workers in these groups do not live on the Downtown Eastside and their loyalty to one another is stronger than their loyalty to poor people.

Take Pivot Legal Society, a group of radical young lawyers who claim to be committed to improving civil liberties in the poor Downtown Eastside neighborhood and creating “trickle up” benefits for everyone else in society. When homeless William Simpson asked Pivot for help after Whitty hand-delivered him a letter banning him from the Carnegie premises and Board meetings just two weeks after poor people had elected him to the Carnegie Board – the barring was carried out under the supervision of City Manager and Olympic Organizing Committee member Judy Rogers – Pivot turned him away with the response, “But they’re our friends.”

All of these “friends” running grant guzzling organizations on the Downtown Eastside are experienced in dealing with media; they can be counted on to have designated spokespersons at Oasis who can be trusted not to veer off the message about the government obligation to give more to their assorted projects. Those projects range from a supervised drug injection site a few blocks from Oppenheimer Park to the annual Heart of the City theater production by Carnegie in which Whitty has been exposed for passing off actors from more affluent neighborhoods to the media as Downtown Eastside poor people speaking on behalf of their fellow poor people — not unlike the way Whitty is passing off Oasis as a refuge for poor people “arranged by those who know them best; their fellow community members.” Let the games begin.

On the morning of Oct.12, 2008 when this photo was taken, there was one person sleeping in Oppenheimer Park.

Posted by reliable sources at 3:53 PM 5 comments: Links to this post