A Game at Poverty Olympics: Stretching the Truth With just 2 years to go before the 2010 Winter Olympics in Vancouver, the Poverty Olympics were held on Sunday. Participants marched up Hastings St. to Carnegie Center on Vancouver's Downtown Eastside carrying an Olympic torch and a banner in which the Olympic rings were handcuffs. Inside the Carnegie Center theatre, a packed audience watched as medals were awarded for such games as: Welfare Hurdles, Bed Bug Broadjump, Buy-athon, and Poverty Line High Jump.

But another game was clearly being played here: Stretching the Truth.

Jean Swanson (photo above), representing 'Raise the [Welfare] Rates' and the 'Carnegie Action Project', told the crowd that one reason the Poverty Olympics had been organized was to draw the world's attention to the fact that: "People in Canada, like people in poorer countries, have to search through garbage for food and things to sell. In Canada. So they can survive." 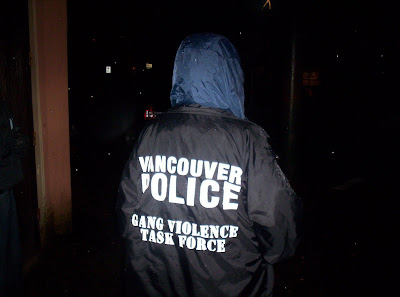 Last night, the Gang Violence Task Force was once again at the No. 5 Orange strip bar at Main & Powell St. They were also spotted there the Sunday before last. And once previous to that too. When the Task Force was first set up in 2006 after a series of brazen gang shootings, a member told the media that they would be 'in the faces' of gang members, showing up at places they hang out. 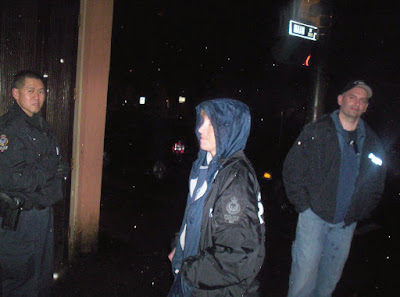 The officers seemed startled when the camera flash went off, says the photographer, "but they were friendly". The white male to the right asked where the photos would be posted. The photographer told him that one of the sites would be, "NowPublic".