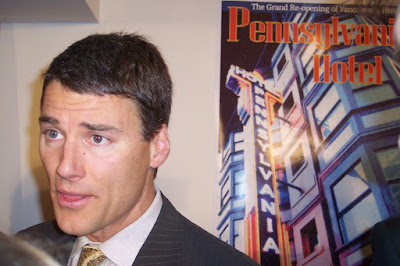 This morning was the "Grand Re-opening" of Vancouver's historic Pennsylvania Hotel at the corner of Carroll & Hastings on the Downtown Eastside. About a century ago, it was a swank hotel advertised as having a telephone in every room, but it has recently been turned into supportive housing for the poor and screwed up. 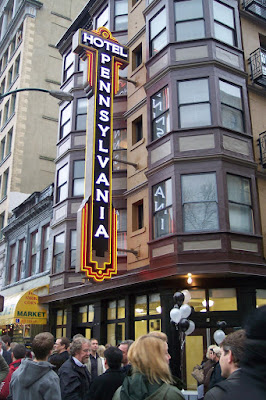 The Pennsylvania Hotel, which many Downtown Eastsiders call "The Portland" as that's what it's been called for years, has been empty since 2000. A hand-out published by the Portland Hotel Society which will be operating the Pennsylvania didn't conceal their disdain for gentrification in the neighborhood. "We didn't want it to become condos or turned into a Backpacker or Tourist Hotel."

So they worked to turn it into supportive housing. "Eventually, we cobbled together the money to renovate the building so that each room has its own bathroom and small kitchen. The Hotel will also receive a subsidy allowing for rents of $375/month and 24-hour staffing." 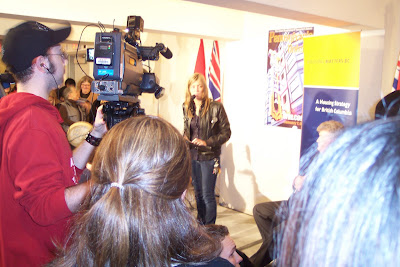 Photo above: Portland Society Co-Director Liz Evans on the stage in the basement of the Pennsylvania Hotel. 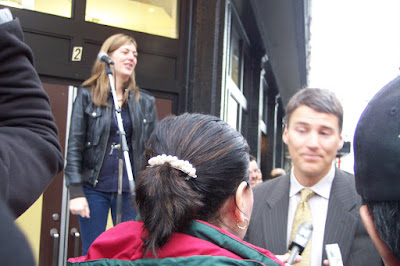 Photo above: Liz Evans behind microphone during second part of the opening which took place outside the Pennsylvania on the corner of Hastings & Carroll St. Mayor Robertson is on the right of the photo.

Liz Evans who co-directs the Portland Hotel Society with her spouse Mark Townsend -- the PHS also operates Insite, the supervised drug injection site on the same block -- was MC at the Opening. Evans is a psych nurse and about 15 years ago was listed in the Globe & Mail as one of Canada's young up and comers to be watched. But a few Downtown Eastsiders believe there are other reasons she should be watched. 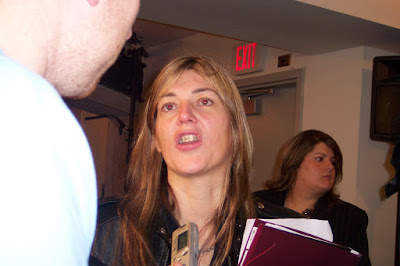 Psych nurses have gained a reputation for unchecked abuses of power on the Downtown Eastside. A few years ago, when evidence surfaced to support serious allegations against nurse Don Getz of making fraudulent entries in a psychiatric report arranged for political ends against a normal Downtown Eastside resident, a few Downtown Eastside men came forward and said, 'While we're on the topic of psych nurse abuse, why not look at Liz Evans?"

There are allegations that early in her career in Vancouver, Evans abused her influence as a psych nurse to contact a psychiatrist and falsely portray a woman, Christa, as needing mental health intervention. This tactic was allegedly used during a struggle by Evans and her spouse to get lease-holder Christa, to move out of a house they shared in the Strathcona neighborhood. Terrified of being committed, Christa, moved out of the house. According to a friend, Christa gets 'chills up her spine' to this day when she comes across Liz Evans. [Jim Green, who helped found the Portland Hotel Society and would later run for mayor, also lived in Strathcona; he met Evans in the neighborhood and recruited her to work on supportive housing. He gave her a kiss at the opening today.]

There is also an allegation that during the same period of Evans' career, she had a sexual relationship with a mentally ill man she had been hired to care for; he later had a breakdown. 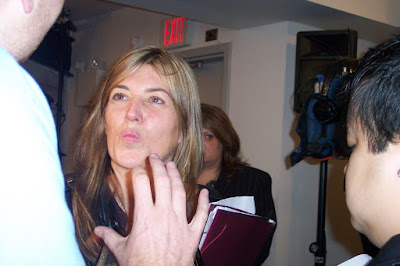 Evans would no doubt deny these allegations. But if she is going to be operating "supportive" housing for the government, there should be an independent investigation into such allegations made by men who knew her at the time this alleged misconduct occurred. 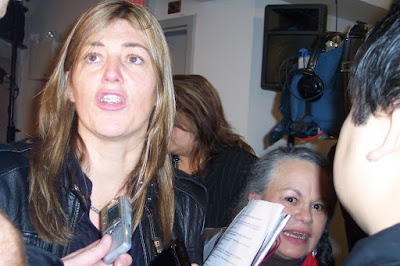 That was then. This is now. But it remains important that an investigation take place as today's praise by Evans and her PHS associates of their 'partner' in the development of this supportive housing, the Carnegie Community Action Project -- the praise appeared in the introductory paragraph of the glossy handout at the opening -- suggests that not much progress has been made. The endorsement of Carnegie suggests that Evans is willing to overlook the very type of abuse that Downtown Eastsiders fear could occur at the Pennsylvania: people who can't afford lawyers will be easy targets for fraudulent claims entered into reports should they criticize staff [CUPE members].

Carnegie is notorious for this type of abuse of the poor and the homeless. One of many cases is that of homeless William Simpson who was barred from entering Carnegie after he managed to get himself elected to the Carnegie Board. When the barring was exposed, the damage control strategy involved concocting entirely unsupported claims about Simpson posing a "WorkSafe risk". 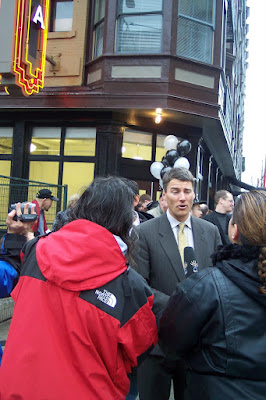 When I saw the throng of reporters packed around the stage where Liz Evans stood in the basement of the Pennsylvania, and heard a panicky CKNW reporter pleading with people on the jammed staircase to let her get down there, I wondered why such a big deal was being made of this opening. But when Evans introduced Mayor Gregor Robertson and Housing Minister Rich Coleman, I understood. Homelessness is a big deal. Politicians are eager to show local voters and the world that action is being taken on homelessness. (This morning Vancouver radio host Nicki Renshaw said that when she was in London, England for Christmas, the tv news was reporting that homeless people were dying on the snowy streets of Vancouver.) 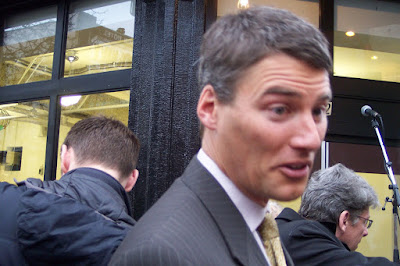 Robertson reminded the crowd that homelessness was a priority of his government. But first he doused the crowd with political correctness by stating that this event was taking place on "Coast Salish traditional territory". Robertson also said that organizers of the Pennsylvania had spent many years of their lives bringing this supportive housing project to completion. He didn't mention that many were well paid for their time; we have no idea how much PHS executives were paid because they wouldn't release those figures when the Courier newspaper asked them to. And Robertson thanked the ultimate supporter of this supportive housing, "the taxpayer". 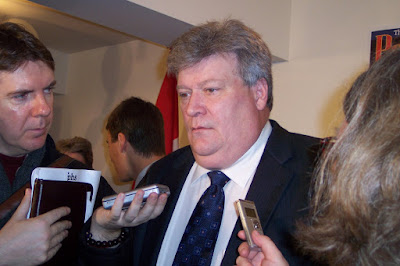 Photo above: Rich Coleman, BC Minister of Housing

BC Housing Minister Rich Coleman also spoke to the packed crowd in the basement of the Pennsylvania. Coleman said of this supported housing, "It's not about bricks and mortar; it's about people." 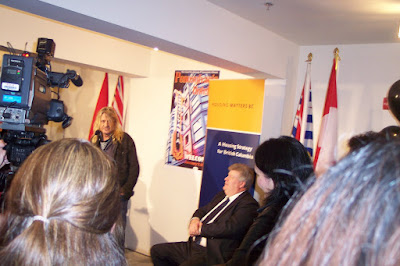 Photo above: Pennsylvania resident Earle Crowe stands behind the microphone on the left of the photo as Housing Minister Rich Coleman (seated) looks on.

The crowd also heard from Earle Crowe, a resident of the Pennsylvania Hotel. Crowe said he'd moved in after being homeless for 3 years. What he didn't say is that he had the right connections and the right politics to get in. It pays to be on the political left or to at least be non-threateningly apolitical if you want to get into social housing on the Downtown Eastside. A few years ago, Crowe worked for the Carnegie Street workers; I remember seeing him slumped over in Pigeon Park on drugs during that period. That was the period when street workers were involved in an illegal scam to silence a victim of alleged (but well supported by documentation) political psychiatry by psych nurse Don Getz. The person's medical confidentiality was breached, a description of this person was passed around amongst street workers and street nurses for no apparent reason than to expedite harassment of them on the street. The victim reports no harassment by Earle Crowe though. He appears to have been otherwise occupied. 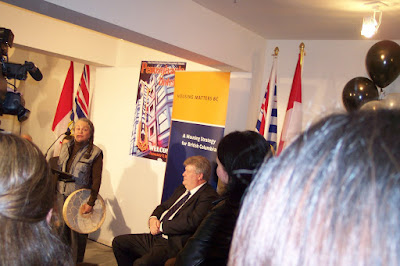 Before spectators and speakers left the basement, drummer Gail Bowen -- Burton Cummings learned to play harmonica on her veranda in Winnipeg -- performed a "peace prayer". But first she reminded the crowd that she agreed with Robertson, that this is "unceded Coast Salish territory". 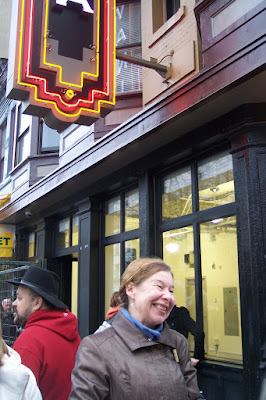 Above photo: Judy Graves, a publicly-funded advocate who walks the streets and approaches the homeless to help them get welfare and a place to stay.
.
Although much of the opening ceremony took place in the basement of the Pennsylvania, the final leg took place outside on the corner of Hastings & Carroll St. A switch was flicked in front of the crowd, turning on the neon "Pennsylvania Hotel" sign. Actually, this sign has been turned on for over a month now but it was turned off earlier today so that it could be ceremonially turned on again at the opening. A low income guy watching commented loudly that the sign had cost a fortune. "For the cost of that sign," he said, "they could have built more social housing."

I like the sign. I like seeing it shining at night in the neighborhood. But with povertarians claiming to be improving the lives of Downtown Eastsiders while ignoring the epidemic of human rights abuses that they or their allies are inflicting, it will take more than a neon sign to light up the darkness. 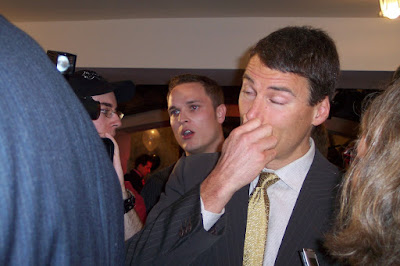 [Thanks to the Downtown Eastsider who took photos and emailed them to us.]
Posted by reliable sources at 1:51 PM 7 comments: Links to this post