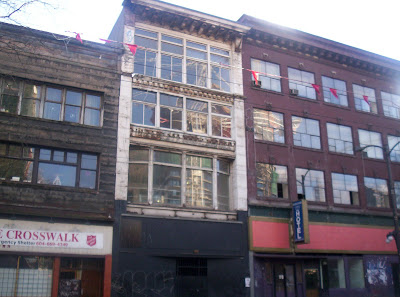 The Simon Fraser University Board of Governors has been asked to meet its obligation to disclose to potential donors SFU’s unresolved history of allegedly “operating a sexual harassment ring” in the Center for the Contemporary Arts. The DTES Enquirer has obtained a copy of the request to the Board dated February 12, 2008.
The sexual harassment ring consisted of professors in the 1970's, 1980's, and possibly 1990's targeting female students, resulting in at least one student dropping out.
The sexual harassment ring operated out of the Visual Arts Department at the Center for the Contemporary Arts and consisted of the entire studio faculty: Jeff Wall, founder and head of the department, Greg Snider, Assistant Professor, and David McWilliam, Assistant Professor. Sexual harassment was not restricted to Visual Arts professors or students though.
The Center for the Contemporary Arts was billed as "interdisciplinary" and certainly this approach extended to the sex lives of professors, with Jeff Wall having sexual relations with Lisa, a student in Dance -- at the same time as he and Greg Snider were competing to get a particular Visual Arts student into bed.
After one student revealed on a Course Drop form that she had been sexually harassed, Jeff Wall left to take a job teaching photography at the University of British Columbia from which he was later fired. David McWilliam took a job teaching painting at Emily Carr College of Art & Design. It is not known whether the sexual harassment allegations had any bearing on these men leaving SFU. Greg Snider, the sexual harasser referred to on the Course Drop form, was promoted at SFU to head of the Visual Arts Department.
SFU's Downtown Visual Arts Studio (the top three floors of the white building in center of photo above) on Hastings St. in Vancouver's Downtown Eastside was a major site of sexual harassment. Studio space on the Burnaby Campus was another site.

This month's request for full disclosure to prospective funders comes almost two months after Premier Gordon Campbell was criticized on the internet for giving the SFU Center for the Contemporary Arts almost $50 million, despite it's unresolved history of operating sexual harassment sites. President Stevenson has launched a campaign to raise an additional $30 million privately.

Michael Audain, President of Polygon Homes, who boasts having participated in the Black civil rights movement in the U.S., responded to the campaign for private funds by donating $2 million to the new Center for the Contemporary Arts. Audain was asked via an e-mail -- SFU published his e-mail address bbinns@polyhomes.com -- if he was aware of SFU's unresolved history of operating a sexual harassment ring when he made his donation and agreed to have the teaching gallery named after him. He did not respond.

Past communication addressed to SFU President Michael Stevenson about the sexual harassment ring has been ignored.

The Feb. 12th request for full disclosure to donors was addressed to Nancy McKinstry, Chair of the Board of Governors, along with other Board members. SFU promotes Nancy McKinstry on their website as a current mentor and "founding member and past-chair of the Minerva Foundation for BC Women, an organization dedicated to supporting women throughout British Columbia to attain their educational and leadership goals."
Posted by reliable sources at 4:13 PM 2 comments: Links to this post

Povertarians Deny Services to the Poor on Friday Night

Yesterday at around 3:30 p.m. the power went off in part of the Downtown Eastside. Hydro workers promised to have it restored by 7 p.m. at the latest. Pedestrians were darting across streets with no street signals as rush hour traffic began.

They and their CUPE cohorts could get a Friday night off with pay. A decision was made that there would be no night shift at the Center which stays open until 11 p.m., although services close at 10 p.m. Staff were telling patrons this so many did not bother return when the power was restored at around 6 p.m. But in the end, Carnegie made a decision to keep the building open.

But it was clinically dead.

The primary services that draw members into Carnegie Centre on a Friday night were shut down. The third floor which houses the computer room was completely locked; nobody could even get onto the 3rd floor. Kereoke in the theatre was canceled, even though the volunteer who was going to handle it was there. And the library was locked. There was a sign in the front lobby announcing: 'No third floor computer room, No Kereoke.'

It is not known whether any staff other than security guards and a receptionist were in the building. The number of service closures would suggest that staff had made themselves scarce. Certainly, there would have been no management staff and no volunteer supervisor on duty if the entire third floor where their offices are located was shut down.

Closing services without adequate justification is a constant problem at Carnegie. Last Saturday, the Learning Center, much in demand for it's computers, was closed.

Mayor Sullivan has been made aware by several people that CUPE is ripping off the taxpayer by locking the poor out of services at Carnegie on a whim. Yet he appears hapless in the face of CUPE.

Bloggers have curbed the problem of service closures somewhat by relentlessly reporting on them. By doing so, though, bloggers face ongoing risk of retaliation by Carnegie staff and Director Ethel Whitty.

[Sorry: When this article was originally posted, it was based on the fact that Carnegie staff were announcing to members that the entire building would be shutting down for the night. Bloggers didn't realize until 24 hours later that a decision had been made to keep the building open, albeit with services almost non-existent. When we got feedback from a reader that the post was incorrect, we double checked with our sources and made the necessary corrections.]

Posted by reliable sources at 11:45 AM 4 comments: Links to this post

Good News: On Monday, a Dollar Store will open near Pender & Main St.
Posted by reliable sources at 1:15 AM 2 comments: Links to this post