Homeground Festival: Trial Run for Corralling the Poor during the 2010 Winter Olympics 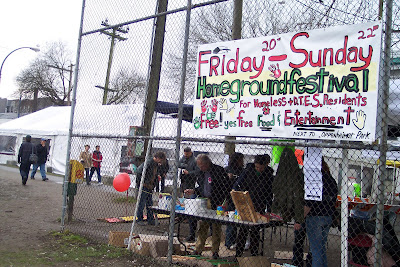 If you listen to the traffic station on the radio, you would have heard that the section of Dunlevy St. which runs by Oppenheimer Park was blocked to traffic for three days, from Friday to Sunday of this week. That's so the Homeground Winter Festival could be held.
The Homeground festival was billed in flyers as being "for Homeless & Underhoused Downtown Eastside Residents" -- that angle probably appeals to funders -- but the banner hanging at the actual festival billed it as being for "Homeless & DTES Residents".   I talked to a couple of guys who dropped by the festival at about 2:30 this afternoon and they said that there were about 80 people there, including volunteers. But they said more people seemed to be arriving later to pick up free tickets for the Punjabi dinner to be served at 5 p.m.  And the day had gotten off to a rainy start, but the sun was coming out later in the day. 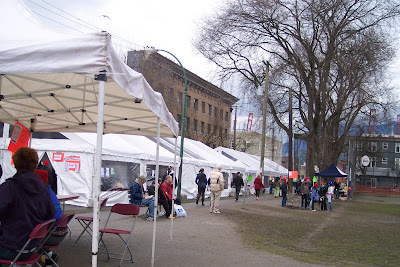 Photo:  Homeland Festival tents line Dunlevy St. between Cordova and Powell.
I talked to a thin native guy in his late thirties who he said he'd been to the festival on each of the three days and enjoyed it.
I talked to a caucasian Downtown Eastsider later at Carnegie and he said what others at Carnegie had said; he hadn't been aware that the festival was on.  He said he doesn't pay attention to posters.  He had bumped into a friend at Carnegie who suggested they walk over to to the festival to see if there was any free food.  When they got there, only festival volunteers were being allowed into the Food Tent.  So he got himself a coffee in the Music Tent and sat down and read the newspaper.  The coffee was good, he said.  And there was real cream to put in it.
While he was sitting in the tent reading the paper, a couple of stand-up comedians came on stage but he hadn't been interested.  I talked to a woman at Carnegie who said she found the comedians  funny in an "amateurish" sort of way.  She said the female comedian identified herself as "three quarters" native and told some native jokes; the male comedian may have been Metis. She repeated some of their jokes:
The male comedian talked about the practice at Alcoholics Anonymous of giving you a cake for each year you're sober.  He said he had twice gotten sober for six months.  "I figure that should be good for a couple of cupcakes."
The female comedian said, "I've been working for the government for 15 years.  But after a while you get tired of getting a pay cheque for doing nothing.  A couple of weeks ago, that happened to me."  So she decided to rely on "nepotism" to get another job, but that didn't get her anywhere because none of her relatives have jobs.
She also asked, "Why are there so many white people? Because they don't have any natural predators."  The loudest laughs reportedly came from white organizers.
Those would be some of the same white people who had a hand in putting together the festival programme with the notice at the bottom: "Homeground honours the traditional Territory of the Coast Salish people where we are gathering."  On the Downtown Eastside, you're supposed to act as if you believe that aboriginal people lived a noble, idyllic, life until the white man ruined it.  If you want to score jobs in the poverty industry, you have to pretend you believe that.  It's serious business. 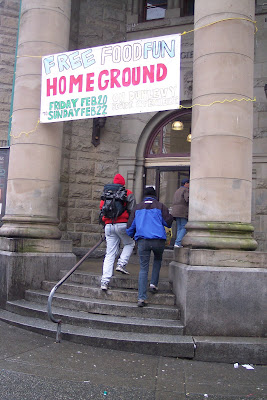 Photo:  Steps of Carnegie Center, Sun. Feb. 22/09
The programme for the festival announced that the "HomeGround Production Team" included Ethel Whitty, Director of Carnegie Community Centre, and Dan Tetrault, Assistant Director of Carnegie Community Centre.
A Downtown Eastside musician said he was mystified as to the purpose of this sudden festival. But what Whitty wasn't telling Downtown Eastsiders in the flyers was that this was a trial run for the Winter Oasis Festival intended to occupy them during the 2010 Olympics.  Whitty did tell the Carnegie Board of Directors about this trial run in a Director's Report last year. The Winter Oasis Festival was also mentioned last year in a staff report to Vancouver City Council, as organizers were seeking a portion of the $1 million civic fund for Olympic Social Sustainability programs.
Tonight the Hastings Express band will be playing at the Homeground Festival.  That band includes Rachel Davis, a former Carnegie Board member who got on the wrong side of Whitty. Davis began asking questions about why homeless William Simpson was banned from Carnegie Center just two weeks after being elected to the Board of Directors.  Whitty has never addressed this denial of democracy.  But she's a busy woman, organizing for the "Homeless and Underhoused".
Posted by reliable sources at 5:18 PM 1 comment: