Usually when a Downtown Eastsider walks into a courthouse, they expect to be served something other than jumbo chocolate chip cookies. But that's what they got this afternoon at the opening lunch of the new Community Court on Gore St. near Cordova, beside the Sunrise Market. 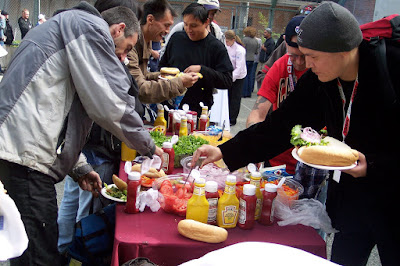 The Community Court, which began operating earlier this month and is modeled on one in New York City, will offer a quick, "integrated" response to people nabbed for petty crime in downtown Vancouver. There will be a welfare worker, a housing worker, a forensic psychiatrist, to name a few, in the court house to connect people pleading guilty with services that might help them. The idea is that helping people with some of their underlying problems such as being broke, addicted, homeless, might diminish their temptation to break into your car and mine. Sentences will often involve community service such as cleaning alleys or working in kitchens. 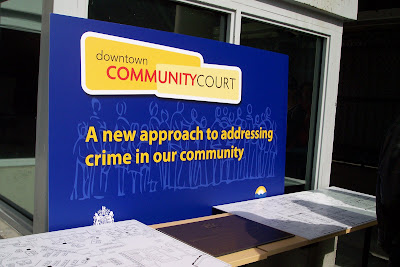 Today, sheriffs standing at the front door of the Community Court were calling out to people walking by on Gore St., "Come on in! Have a burger!" Inside the building, a corridor led past the closed door of a court room and on to an outdoor court yard. Some Downtown Eastsiders recognized it as the courtyard of the old pre-trail jail. Today, it was the site of a lunch catered by the Bread Garden: hamburgers with lettuce, onions, tomatoes, pickles, etc., hot dogs, potato salad, caesar salad with large croutons, bags of potato chips, cans of pop and bottles of water. For dessert, there were assorted fresh jumbo-size chocolate chip cookies with huge chunks of chocolate in them. There were other varieties of jumbo cookies too, like chocolate with almond slivers sprinkled on top. 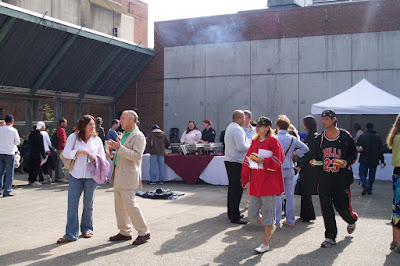 The guy in the off-white suit and green shirt just left of center in the above photo is a judge in the Community Court. A guy walked up to him and said, "You look sober, you must be the judge." The judge laughed and said, "It's early in the day." 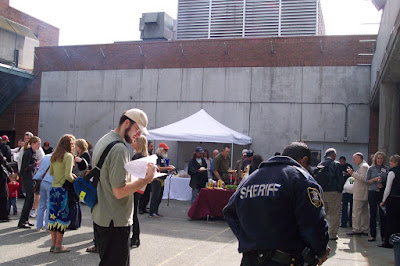 Photo above: Guests mingle in the outdoor court yard where the lunch was held inside the Community Court building. 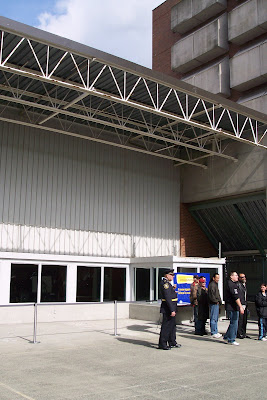 Photo above: A sheriff in dress uniform stands at the back of the food line up in the outdoor courtyard. 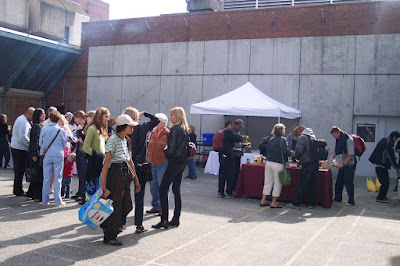 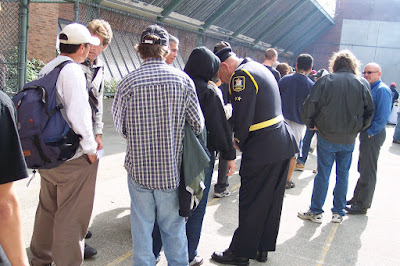 Here a sheriff chats with people lined up for food. Early on, the crowd was made up largely of people who worked in the neighbourhood, with just a smattering of the low income population. But word soon got out that there was a free lunch at the community court -- somebody yelled it out at Main & Hastings -- and a crowd of poor people showed up. The food quickly ran out as they had catered for just 300.

Condo developer and philanthropist Michael Audain, ducking criticism for giving the Audain Lifetime Achievement Award to Jeff Wall who allegedly operated a sexual harassment ring while head of the Simon Fraser University Visual Arts Department, has given more money to a cause he has named after ....himself.

Audain has slapped down $2 million for The Audain Emerging Artists Aquisition Fund at the Vancouver Art Gallery. The Fund will allow the Art Gallery to purchase art works from British Columbia artists, 35 years old and under, considered promising.

Who would be considered promising? Young artists who spread their legs for Jeff Wall or his underling professors Greg Snider, or David McWilliam, and zipped their lips? To a survivor of advanced sexual harassment by both Wall and Snider at SFU, this is no joke: "I doubt Audain could afford to see an artist as promising if she's been talking about what went on at SFU. He and Wall are friends."

The survivor sees Kathleen Bartels, Director of the Vancouver Art Gallery, as part of the problem too. As long as Audain is throwing money at the VAG, Bartels seems willing to allow boys to be boys. Bartels allowed Audain, Chairman of the Vancouver Art Gallery Foundation, to hold a party on VAG premises to present Wall with his Lifetime Achievement Award while he remained uninvestigated for the sexual harassment ring he allegedly operated. Just two weeks ago, Bartels told the Globe & Mail, “If we only had five more Michael Audains, we'd be in a more significant place.”

"All I've asked for is an investigation", says a survivor, adding that it's difficult to get one when Audain and Bartels are essentially covering for Wall. Never once has Audain called for an investigation in the sexual harassment environment at the SFU Centre for the Contemporary Arts under Wall. [Audain also donated money to a Gallery to be named after himself at the soon-to-be-opened SFU Centre for the Contemporary Arts which has been accused of attempting to bury their sexual harassment history in the foundation, like the mafia buried the corpse of Jimmy Hoffa.] Bartels is certainly not in the dark about the allegations against Wall. A survivor briefed her assistant after she took the job as Director of the VAG.

Bottom line: All the money Audain throws at the new Audain Emerging Artists Acquisition Fund can't paper over his devaluing of young women.
Posted by reliable sources at 10:26 AM 3 comments: Links to this post