Who is on welfare? Wednesday was welfare day and City staff at the Carnegie Center locked the poor out of the building all morning, claiming they were having a staff meeting.

Then they closed the cafeteria early in the afternoon, claiming "It's a staffing issue." One Carnegie member dropped in to buy some soup and found the cafeteria closed at 3:40 p.m. Another guy had dropped by earlier and was irritated to find the cafeteria closed, pointing out that there were two full time staff walking around inside the cafeteria. And the kitchen supervisor, Catriona Moore, was in the building too.

This is an ongoing problem. CUPE members who staff Carnegie, as well as City management Ethel Whitty and Assistant Director Dan Tetrault, act like welfare day isn't a regular work day. But you'd be surprised how many low income people in the neighborhood want to use Carnegie Center on welfare day.

It doesn't have to be welfare day for Carnegie staff to slack off though. On Tuesday morning, the day before Welfare Wednesday, the line up in the cafeteria was so long it snaked out of the cafeteria and well into the seating area. There was one inexperienced volunteer doing all of the serving and working the cash. Carnegie members reported that staff were standing around chatting with one another. Catriona Moore, the kitchen supervisor was there. Colleen Gorrie, the Volunteer Co-ordinator was there putting her hands on an older man in the line up and joking with him. "There's staff everywhere," a guy with a French accent called out. "They don't see." Another man said he stood in line for 20 minutes just to buy a bowl of cereal.

The problem of the kitchen closing early is certainly not restricted to welfare day. When Anthony -- who members say is friendly and a pretty good cook -- is supervising, it is not uncommon for the kitchen to close ten, fifteen, even twenty minutes early. This is irritating to people who make a point of going over to Carnegie to get a cheap bowl of soup before closing.

There is one thing that can be counted on to get CUPE members moving: bloggers tipping off taxpayers. The topic even dominated one of their welfare day staff meetings. Some CUPE members are worse than others though: Catriona and Anthony haven't been instigators in the witch hunt for bloggers. But Colleen Gorrie was. She would like to, as George Bush says, "Smoke 'em out."
Posted by reliable sources at 4:33 PM 8 comments: Links to this post 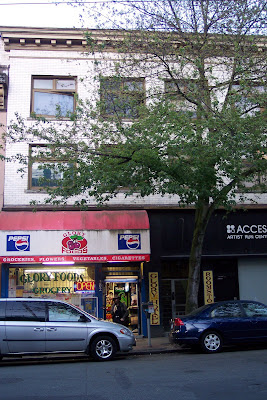 Last week a guy was “cooking drugs” in his room on the top floor of Glory Rooms near the Gassy Jack statue at Carroll and Powell St. on the Downtown Eastside. But his home cooking accidentally triggered the sprinkler in his room. (The late City Councillor Bruce Erikson, Libby Davies husband, fought to have sprinklers installed in all Downtown Eastside hotel rooms because people were dying in fires.)

Water was streaming down the stairs of the Glory. An aboriginal man who lives in the room below – he's not a drug user and quit drinking years ago – came home in the late evening to find water streaming down his walls. His brand new big screen tv was wet. So wet, in fact, that he's still scared to turn it on. His laptop computer was wet too and he's been drying it out with a hair dryer, said a guy chatting with other Downtown Eastsiders in the Ovaltine Cafe. Even his desktop computer was wet.

Flood damage extended to the Glory Foods store below. The man who runs the store said water came through the ceiling and walls. "I lose a lot of money", he said with a Korean accent. He said that the insurance covers some but not all of his losses. He had to replace a lot of merchandise.

“What happened to the guy cookin’ drugs?”, I asked Downtown Eastsiders talking about the flood at the Ovaltine Café. “He took off”, said one. But he returned on the weekend when he knew the manager would be off. He hung around outside but the other tenants wouldn’t let him in.
Posted by reliable sources at 4:32 PM 1 comment: Links to this post 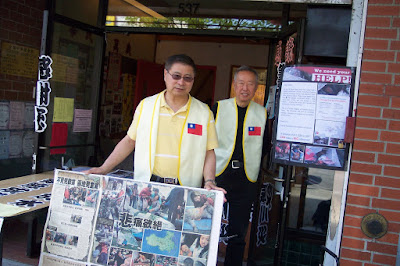 On Main Street near Keefer in Vancouver's Chinatown, a storefront has been opened to take donations for victims of China's recent earthquake. They have photos and information about the quake.
I saw it open a few times when I walked buy. It was open on Wednesday.
Posted by reliable sources at 9:31 AM No comments: Links to this post