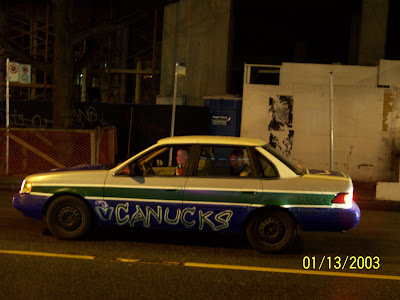 I took this photo last season on Robson St. near the Central library after a Canucks game, but the date on the camera was wrong.

I hate this stuff, the hit to Bruins' forward Nathan Horton. It takes the fun out of watching a game when I  know some guy is probably going to have to suffer the effects of a concussion.

Even though the NHL now has a ban on blindside hits to the head of unsuspecting players, I doubt Rome will be suspended for long.

Horton -- no relation to Tim Horton -- is from Ontario, a town called Dunnville.

The NHL gave Rome a four game suspension.  He's now out of the Stanley Cup finals, and so is Horton who has a severe concussion.  In deciding on the length of the suspension, Mike Murphy of the NHL said they took into consideration the lateness of the hit on Horton and the severity of his injury.

The suspension is an indication that the NHL is starting to take head injuries more seriously.  Even Prime Minister Stephen Harper, a big hockey fan, spoke out a few months ago about the need to curb head injuries in the NHL.   Concussions can leave a person with daily headaches for years, and can make them more prone to later life brain deterioration such as dementia.

I understand the critics though who say the suspension of Rome is too severe.  They argue that if the NHL was going to get tough, it is unfair to suddenly begin in the finals. Rome himself previously suffered a concussion, and there was not even a penalty.
Posted by reliable sources at 10:13 PM 1 comment: Links to this post