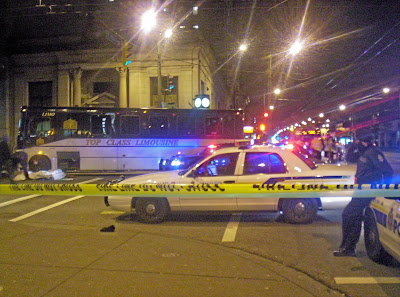 A "Top Class Limousine" tour bus was at the bottom of it's class tonight when it had a pedestrian under it's wheel. The 68 year old pedestrian was struck by the bus shortly before 9 p.m. as it turned north off Hastings onto Main St., by the Pathways Job Search Center. A witness who passed by shortly after the accident, said, "They had to take him out from under the wheel." (The pedestrian can be seen lying under a white sheet at the left of the photo above.)

The bus appeared empty of passengers.

At least one security guard came to help from the Carnegie Community Center across the street. The pedestrian still had a pulse but as a police officer entering the Carnegie Center said, "It doesn't look good." He died shortly afterwards at the scene. He did not die enroute to hospital as CTV television reported. He was put into a wine colored body bag at the scene and loaded into the coroner's van.

A bearded VPD Constable wearing a turban (on right of photo above) stood behind the yellow tape across the street from the accident to make sure nobody violated that boundry. But his skills as a community-friendly cop were less than stellar; he was defensive and snooty when a local resident politely asked him if he could walk on the Main Street sidewalk to get home. That same Constable was standing by the yellow tape at the Cambie Hotel on February 15th, the night Steve Seymour was shot to death.
Posted by reliable sources at 9:09 PM 10 comments: Links to this post

Carnegie Locks Poor Out of Computer Room this Afternoon

This afternoon, the computer room at Carnegie Center was closed. Low income people arriving to use computers found the door locked and the place in darkness.

Carnegie's Director, Ethel Whitty, has an office just meters away. But she seems to do little to ensure that this taxpayer funded service remains open at all times.
Posted by reliable sources at 9:00 PM 2 comments: Links to this post