Central Library Evacuated due to Fire Alarm on Roof

At around 8 p.m. this evening, a loud bell started ringing - bing bong, bing bong -- at the Central Branch of the Vancouver Public Library. A woman came on the loud speaker to say that the fire alarm on the roof had gone off and she would keep us posted.

Later she came on the loud speaker again and in a more excited voice told us to evacuate. She said something about "the roof" but I didn't hear exactly what, because of the noise the alarm was making. 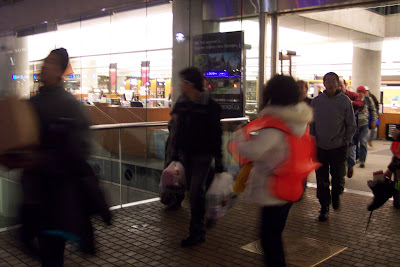 I asked one of the staff persons putting on an orange neon vest where the fire was and she said, "I don't known, one of the upper floors". 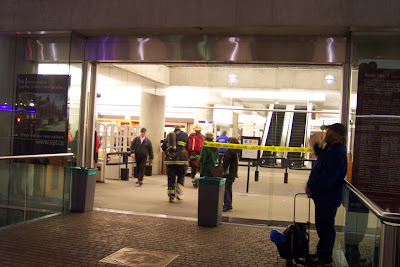 Patrons came down the elevators and streamed into the lobby. As seen in the above photo, two firemen entered the library. 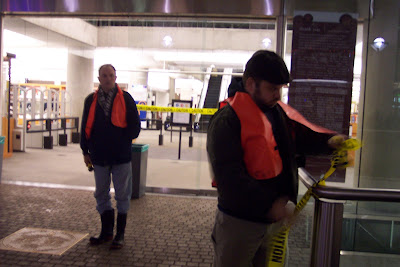 Suddenly there were staff everywhere wearing orange neon vests. It was obvious that staff have emergency response training.

One staff person, a middle aged woman without an orange vest, zipped into the washrooms to make sure there was no one in them. She kept leaning on people lingering over the first floor computers to get a move on.

I wasn't paying close attention but it seemed to me that the entire library was evacuated in under five minutes. At the risk of sounding like I have Stolkholm Syndrome after being a taxpayer held hostage by library staff this summer, I will say I was impressed by the performance of library staff. 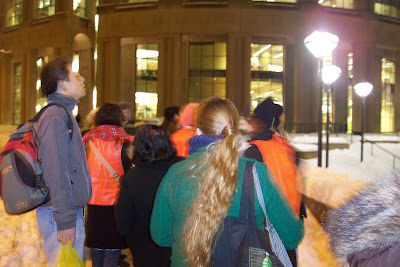 Some staff and patrons went outside and stood on the snowy steps. From the steps, billows of what looked like steam or smoke poured off the roof. People were saying it was probably just steam. One guy looked around and said that none of the other buildings had it. 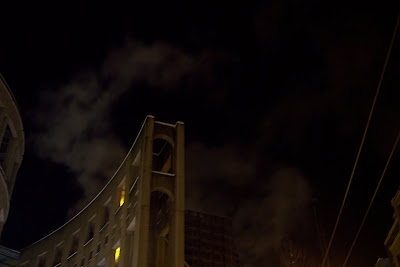 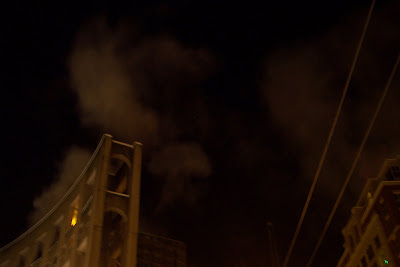 At about 8:40 p.m. staff were allowed back inside the library. A few patrons were lined up in the lobby in front of the locked doors at about 8:45 p.m. when I left.
Posted by reliable sources at 8:59 PM 8 comments: Links to this post 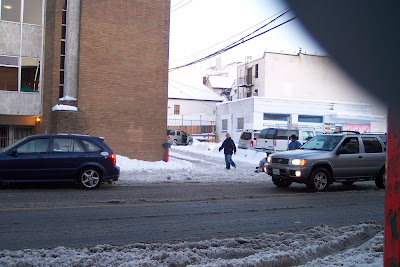 This afternoon at about 4 p.m., I was walking by First United Church at Hastings at Gore St. A man I presumed was a drug dealer grabbed a known addict and marched her to alley behind the church.

She was yelling that it was just three dollars that she owed him, and he didn't seem to dispute that. She was yelling at people in the vicinity, "Could somebody give me three dollars!" He was holding her tightly by the arm in the alley, yelling at her, shaking her. Finally he swatted her and threw her to the ground. In the above photo, you can see her on the ground in the alley behind First United Church, as a car passes on Gore.

This woman is one of the few Asian addict-panhandlers I see on the streets. She walks through McDonalds restaurant at Terminal and Main regularly to panhandle customers. She has a sense of entitlement that leaves my jaw dropping. Once she approached a couple sitting at a table in McDonalds and asked for money. They refused and she insisted that they should give her something, "I didn't walk all the way up here for nothing!"

But I've never seen her be violent.
Posted by reliable sources at 4:12 PM 2 comments: Links to this post