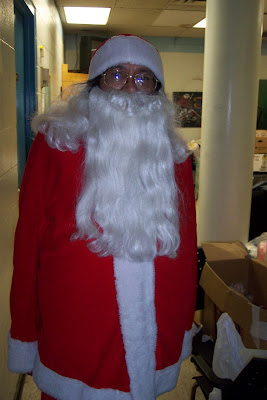 On Christmas Day there was a free turkey dinner open to the public at the Evelyn Saller Center on Alexander St. (Many Downtown Eastsiders call the Center "the 44", as some of these facilities used to be at 44 Cordorva St.)

Everyone who walked in the door was given a dinner ticket that had "City of Vancouver Dept. of Housing and Properties" written on it. They were also given a second ticket that they could take to Santa in the recreation room and exchange for a gift after they'd eaten.

Santa gave one guy thick socks. He gave a woman a package with three types of cocoa butter in it.

There was a Chinese woman serving the turkey dinner from the steam trays in the cafeteria who seemed to be enjoying Christmas. She was singing, "Christmas comes just once a year." One guy who had been in the line up said, she's probably happy about the double time she's getting paid. 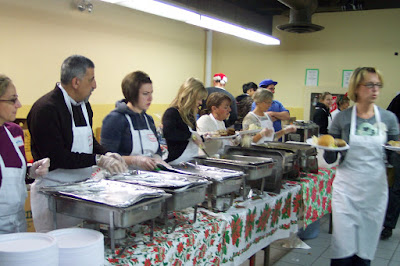 Salvation Army Harbour Light near Cordova & Main St. on the Downtown Eastside served a full turkey dinner on Christmas day. There were volunteers of all kinds. There was even one boy about 13 years old serving from a steam tray. Another teenage boy was serving tables. There was a Jewish couple, Ezra and his wife, serving from steam trays. All the volunteers were friendly and warm.

The dining hall was full, with new people constantly coming in from the waiting room. The wait was about 15 minutes in the waiting room where they played Christmas music. There was a red banner at the front of the room with something on it about accepting "Christ", but there was not a heavy emphasis on religion.

There was the occasional double-dipper. One guy who looked downtrodden said he had come through the waiting room twice so he was on his second turkey dinner, but he was too full to eat a second apple pie. So he offered it to the guy beside him who thanked him a couple of times. Another guy eating a dinner asked a middle-aged male server if he could take a second dinner home in a take-out container. The male server said they occasionally allow that but don't like to make a practice of it; a little later, a female server gave him a second dinner in a styrofoam take-out container.

Everybody who ate dinner was handed a gift as they walked out the door. The gifts were things people could use, like winter gloves or socks. And the gift packages included a couple of candy canes, a mini chocolate bar, and chocolates wrapped to look like large gold coins.

The Salvation Army runs on government funding as well as donations. But the people serving were volunteering their time.

There was a television camera at the dinner for a while too. But not during the entire dinner.
Posted by reliable sources at 4:15 PM 3 comments: 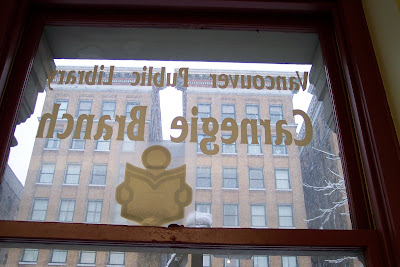 A thirty-something man says he travelled in the falling snow from 41st Ave. and Victoria Dr. to Carnegie to use the Vancouver Public Library public-access computers because "all the other libraries are closed." When he arrived, the computer room on the third floor of Carnegie which houses most of the public library computers in the building was closed.
This is false advertising. The computer room was scheduled to be open on Boxing Day. Carnegie is funded to be open 365 days a year.
The closure of the computer room was frustrating to a number of Carnegie members. One regular computer room user said the volunteer who supposedly hadn't shown up, Norman, had actually left two months ago and the Carnegie Volunteer Co-ordinators Colleen and Sindi hadn't replaced him. Director Ethel Whitty seems to make no contingency plans for the holiday season or any other season to ensure that services stay open even if a volunteer doesn't show up.
The closure of the 3rd floor computer room means that the few other computers available in the building are heavily taxed with line-ups.
(Above photo taken from inside the Carnegie Library at around 3:20 p.m. today as snow falls outside.)
Posted by reliable sources at 3:46 PM No comments: