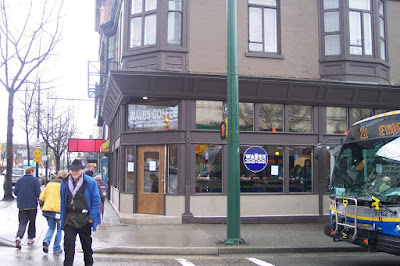 photo: Waves coffee shop at Main St. & Cordova, Mar. 2/09
They say that with gentrification comes dog walkers and specialty coffee shops.
Another Waves coffee shop is opening on the Downtown Eastside, just two blocks from the first one that opened last year at Main & Pender.  The new Waves at Main and Cordova will open on March 16th, in the now renovated space that used to house Vic's Coffee Shop, where you could get good coffee and the occasional bout of e coli.
There were lots of staff in Waves today, all wearing the same dark uniforms.  At first, I thought the place was swarming with cops.
The new location may prove profitable if the Vancouver Police building across the street once again becomes police headquarters, a move Chief Chu supports.  Chu told the media last month that he would like to move VPD headquarters back to the Downtown Eastside, as the move to Cambie St. allowed the Downtown Eastside to deteriorate.  Even police officers driving to and from work in the neighborhood, Chu said, can deter open crime.
Waves has free internet access which there is never enough of on the Downtown Eastside.  An increasing number of Downtown Eastsiders, frustrated with the unreliable access to Vancouver Public Library computers at the Carnegie Center computer room where Director Ethel Whitty too often allows staff to lock the poor out, are purchasing netbooks now that the prices have come down. But often they don't have internet connections at home.
Posted by reliable sources at 1:04 PM No comments: Links to this post