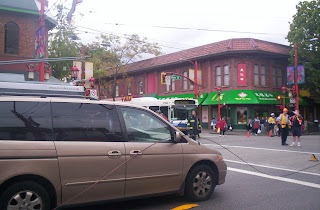 A live trolley bus wire snapped and trapped a man in his car on Tuesday at about 3:30 p.m. in Chinatown. This was the second day in a row that an electrical trolley wire had fallen in the same spot, Main & Pender in Chinatown, during rush hour.

The man trapped on Tuesday in his small brown Sedan risked electrocution if he had stepped out of his car. "It had just started raining again to make it worse; the street was wet," a witness said. It had been raining in that morning and during the night too. The witness was convinced that if the man had gotten out of his car, "He would have been a goner, ZZZZZZZZZZZZZZZZZZZZZZ." 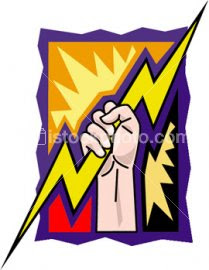 The wire snapped "like a clothesline breaking", the witness said. If the live wire had hit the man's windshield when it came down, he added, it could have broken his windshield and killed him.

The witness believes it may have been the strain of the bus turning from Main St. on to Pender at that moment that caused the wire to snap.

"There was an Asian guy in the car; he didn't look like he was worried," the witness said. "The Transit supervisor was talking to him." 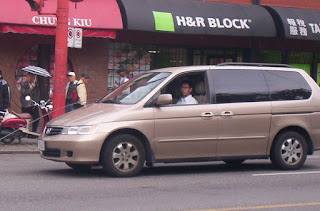 Police were telling people not to step off the curb. "No cars could get by; you couldn't turn left or right on Pender."

The witness had seen the same scene the day before during afternoon rush hour. "They had the cones out, they had transit supervisors, pretty well in the same spot. Police were putting the barricades up."
Posted by reliable sources at 1:24 PM 2 comments: Links to this post