We're Full Up So Bugger Off! 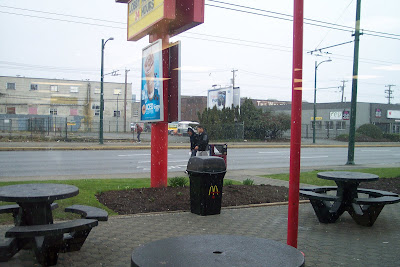 Photo: The building on the left is the homeless shelter near Main and Terminal, Mar. 8/09
The new homeless shelter that Mayor Robertson's administration set up across from McDonald's near Main & Terminal Ave is doing a brisk business.
It was raining last night and a guy sitting in the back of McDonald's restaurant with his head on the table woke up when he heard another guy, an old hippie travelling to London, Ont., ask me if there was a shelter nearby; I suggested he try the one across the street.  The snoozer said that shelter was full.  He had been there at 5:35 p.m. and was turned away.  He was amazed that they were already full as the place had just opened at 5 p.m.
Another guy sitting in McDonald's confirmed that the shelter was full.  He said he had stayed there the previous night though, and his cell phone had been stolen.  He had answered it in the morning when he got a call from his boss, and had fallen back to sleep with it in his hand.  He never saw it again.  The hippie -- who used to live in Vancouver and manage the Cobalt Hotel -- was explaining that the trick to sleeping in a shelter is to wear two pairs of pants and put your valuables in the inside pair.  The guy who had his cell phone stolen said he had also recently had his pack stolen at that shelter.
Anyway the snoozer explained that if you go back to the homeless shelter at 11 p.m., they might have space.  That's because some people sign in early and eat, but don't return to sleep.
These people being turned away from the shelter reminded me of a physiotherapist I knew in Vancouver.  She said she had  been working in a hospital and at Christmas the kids in the hospital performed a play in front of an audience of parents.  A young native boy played the Inn keeper and when Joseph came to the door to ask if there was any room in the Inn, he responded,
"We're full up so bugger off!"
Posted by reliable sources at 6:08 PM 1 comment: