MacLeans is accused of making Muslims the target of "hatred and contempt" and "Islamophobia" with their 2006 article, "The Future Belongs to Islam", an excerpt from Mark Steyn's book, America Alone.

“Beware”, Porter said in an exaggeratedly sinister tone that reminded me of that used by kids wearing Halloween masks. “Beware”, he repeated, this time unable to stifle a chuckle, “when we are reduced to having an expert on Bollywood mulling, sifting, through the work, prospecting for prejudice.”

Porter summed up MacLean's publication of Steyn's opinions as, "It's what journalism does for liberty”. MacLeans was engaging in the “essential trade of ideas and argument -- at this point, Porter's voice got loud -- argument, fierce argument, dissent, contrariness!"

The second defense lawyer, Roger McConchie, noted in his closing arguments that this case did not appear to be high on the priority list of one of the complainants, Dr. Mohamed Elmasry, President of the Canadian Islamic Congress. Elmasry hadn’t shown up at the trial.

Mark Steyn did show up. 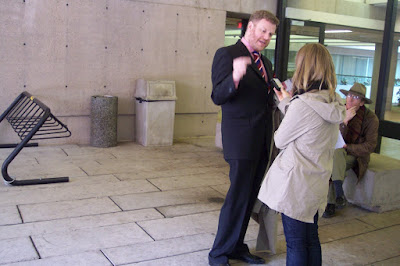 Steyn spoke to the media (photo above taken on Friday) -- is his accent Australian? -- outside the courtroom during the lunch break. He and MacLean’s are “terrified” that the lawyer for the complainants, Faisel Joseph, “put on such an inept case that they may lose”, thereby depriving MacLean’s and Steyn of the opportunity to have this case heard in a higher court.
Posted by reliable sources at 12:04 PM 8 comments: