Van Gogh at the Ivanhoe 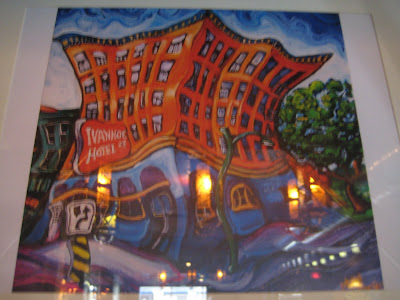 A friend took this photo today of a painting of the Ivanhoe Hotel that hangs in the Ivanhoe Hotel. The artist's name was too smudged to read. The style reminds me of Van Gogh.
When I left the Ivanhoe Hotel about 5 p.m. today with my friend and walked up Main St., an unmarked car with a red light on top stopped at the intersection at Main & Terminal. There were four stiff looking men in dark suits with gold badges, two in the front seat, two in the back. I couldn't stop staring at them, trying to figure out what kind of police they were. My friend said they looked "lifeless". Then my friend said, "Oh, it's Harper!" Stephen Harper's bus was following them, his blue bus with "Harper for Canada" written on the side.
If Harper had stopped at the Macdonald's at that intersection, he could have mingled with our burgeoning population of masked women. They remind me of bank robbers. There is a cluster of these masked people that go to that Macdonalds now, where Downtown Eastsiders regularly have coffee. I never saw any until this year. They may have gotten into social housing in the area since they turn up there semi-regularly on weekends with their kids. They even eat under their masks. I was looking at one a few weeks ago and her husband made a point of glaring at me; I thought he was going to punch me.
I would have liked Harper to stop and answer a question: Exactly how do people wearing masks pass our points system for immigration? We don't allow Klu Klux Klan followers under hooded masks into Canada because we know they hate Blacks. So why do we allow people into the country who hate women to the point where they believe they should be hidden under hooded masks.
Harper did tweak immigration policy to tie it more to the needs of Canada's labour force. South Vancouver MP, Ujal Dosanjh, said on CBC this week that if the Liberals are elected, they will reverse Harper's changes. More masks in Macdonalds.
Another thing: it seems to me that it's more often men than women who are taking stand against these masks. Like Lowell Green who wrote the book, "May Day, May Day."
Posted by reliable sources at 10:26 PM 8 comments: