Distrust at Carnegie Results in Request for Election Recount

Carnegie members don't trust the results of the June 5th election for Board of Directors at Carnegie Community Center. James A. announced at the meeting that he would like a recount. Many other members who came out to vote for incumbent Board member Rachel Davis, who was defeated, support a recount.

Board member Colleen Carroll assured James A. in front of the audience at the June 5th election that he was welcome to count the ballots, that the ballots would be preserved for 30 days for that purpose. Carnegie Director, Ethel Whitty, with a reputation for involvement in fraud and undemocratic practices -- her reputation can be supported with documentation -- sat at the Board table nodding her head in agreement.

Guess what happened when Carnegie member Audrey Laferriere (pictured above at the election) recently asked for a recount? Board President Matthew Matthew responded that the request for a recount would be granted only if it was accompanied by 150 signatures from Carnegie members.
Laferriere began circulating a petition for signatures and on it she wrote, "We do not need a President who is inflexible and into power tripping. Anyone should be allowed to recount votes without hindrance. He has screwed up my long weekend."
Dag, a blogger at Covenant Zone, who had attended the June 5 election to support Davis for speaking out about erosion of free speech rights under the Whitty administration, suspects Matthew Matthew arbitrarily chose 150 as the number of signatures needed. "It's as if he looked in his hat and saw the number 'one five zero.' "

Paul, a labourer who often has dinner at the Carnegie cafeteria, voted at the Board election but was not optimistic about securing a recount. When Paul learned that his pal James A. was one of several Carnegie members helping Laferriere collect 150 signatures, he signed the petition but said, “If they can only get 75 people out to vote, how are they going to get 150 people to sign.” The 75 people Paul was referring to had made up the unusually high turnout at the June 5th election. That turnout was the result of intense organizing by such members of the Carnegie establishment as Jean Swanson (who doesn’t live on the Downtown Eastside) and Paul Taylor, who got their friends and allies to swarm the meeting and vote for a slate that didn’t include Davis.
The Carnegie establishment, including Director Ethel Whitty, had wanted to get rid of Rachel Davis since she appeared on Co-op Radio and later CBC Radio to question the legitimacy of Whitty delivering homeless man, William Simpson, a letter barring him indefinitely from the Carnegie Center where Board meetings are held. The letter was delivered two weeks after Simpson was elected to the Board and it's content was called "contrary to the rule of law" by lawyer Gregory Bruce. Whitty later appeared on CBC Radio and lied about the reason for Simpson’s barring, presenting this man as a "WorkSafe" risk. Her claim completely contradicted the official reason given to Simpson in the letter, that he operated a website that "features links" to the Downtown Eastside Enquirer blog which criticizes Carnegie.

The votes that Carnegie members would like recounted were originally counted by Board secretary Rolph Auer. Rolph is an unfamiliar face to most regular Carnegie members and was elected during a by-election last year after Board member Sophia Freigang resigned due to what she called “human rights” abuses on the part of the Board and City staff. Freigang had pressed for a review of the barring of Simpson and was critical of efforts by Whitty and her cohorts to curb “free speech” by barring a man for being connected to a blog. Jean Swanson (did I mention she doesn’t live on the Downtown Eastside?) had been instrumental in getting Auer elected, using the email list from the Carnegie Action Project to ’remind’ people to come out and vote for him. One of Auer's early tasks as a Carnegie Board member was to show up at a Community Relations meeting and oppose Davis' attempts to curb the use of the Carnegie newsletter for personal attacks. And when the man sitting next to him, Paul Taylor, told Davis to "Shut up!", Auer didn't even flinch.

Even if Carnegie members are granted a recount, they are not convinced they can ever trust the result. James A. said, as a few other members having coffee with him nodded their heads in agreement, that it would be easy for somebody to use a pencil to tick off a few extra boxes on ballots. This possibility exists because many people at the meeting had ticked off far fewer boxes than the 15 they were allowed, as they simply weren’t familiar with many of the candidates. One woman at the table said, "I only voted for Rosetta (aka Rachel Davis) and maybe one other person."

Laferriere wrote towards the end of the petition, "Time is of the essence as the signatures have to be done within three days."

This issue will be raised at the next Board meeting at Carnegie on Thursday evening at 5 p.m. 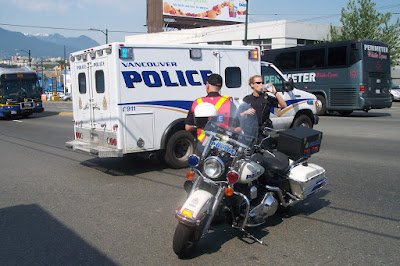 Vancouver Police blocked off all traffic other than buses on Main St. between 2nd and 3rd Ave. for roughly 2 1/2 hours on Monday after a cyclist was hit. The cyclist, riding what a witness described as a "mountain bike", was hit by a white courier truck shortly before 3 p.m. A witness said the cyclist lay face down, not moving. He appeared to be in his thirties.
It was a sweltering hot afternoon as Vancouverites looked forward to the July 1st Canada Day holiday the next day.

The witness didn't know whether the cyclist had been wearing a helmet. It could have been removed, he said, by a woman standing with the cyclist waiting for the ambulance to arrive. The witness thought the woman could have been the driver who hit him. "Ohhhhh," said a man in his seventies listening to the witness, "Woman driver, no survivor."
Posted by reliable sources at 12:53 AM 1 comment: Links to this post