Firemen Climb onto Roof of Best Pizza to put out Fire 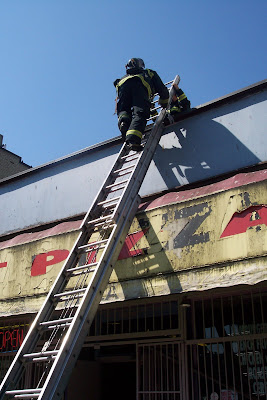 It's the second time it's happened. Late Monday afternoon, something on fire was thrown from the Balmoral Hotel at 159 Hastings onto the roof of Best Pizza next door at 151 Hastings. It was a sweltering sunny day. Four fire trucks and an ambulance arrived.

Three firemen climbed onto the roof of the pizza joint. A fireman later told two Vancouver Police constables -- police arrived after the firemen had finished their work -- that there was lots of trash and needles on the roof.

After the fire risk was over, a Muslim man -- one resident says he thinks the guy is Kurdish -- who runs Best Pizza, made a point of walking up to one of the firemen to thank the fire crew for coming.

Lots of Downtown Eastsiders buy pizza slices at Best Pizza -- they sell for about $1.25. A few customers claim to have been short changed there though, and one fellow says he found a couple of worthless foreign coins in his change.
Posted by reliable sources at 3:09 PM 1 comment:

Skip Everall Hit on his Bike

Have you wondered why Skip Everall, Security Co-ordinator at Carnegie Center, hasn't been at work since his day off on Canada Day? He was hit by a car while riding his bike on the afternoon of Wed. July 2. But he wasn't seriously injured and will return.

Everall has been caught lying in a barring case of a female Carnegie member from the Seniors Lounge for standing up to the notoriously abusive coffee seller, Devor, who has been yelling at her for ten years. The Enquirer will be reporting on this issue later. This woman, who was sitting on the Carnegie patio sipping green tea when she learned that Everall had been banged by a car, said, "I wanna talk to ICBC....They should look at his history of lying."

In addition to this woman's barring, Everall has become notorious for personally supervising the barring on fraudulent pretenses of William Simpson from the Carneige Learning Center by Co-ordinator Lucy Alderson. Everall demonstrated that he was not a man of integrity when he refused to provide Simpson with the reasons for the barring in writing.

The woman sitting on the outdoor patio at Carnegie today -- that would be the woman mentioned above who was barred from the Seniors -- was wondering out loud if Everall had been wearing a helmet when he got hit. She saw Skip on the day she was barred (he had evaded telling her she was barred but she suspected something was up); he was talking to Carnegie receptionist Dan Feeney on Main St. and when he saw her, she recalls, he averted his eyes and took off on his bike, going west on Pender. "I noticed he wasn't wearing a helmet."

She said repeatedly between sips of tea that ICBC should not accept statements by Everall or give him a pay out without first examining his history of lying.
Posted by reliable sources at 3:07 PM No comments:

Jamie Lee Hamilton to Run for Parks Board under NPA

Jamie Lee Hamilton, a Downtown Eastsider who writes the Oldtown News blog, intends to run for Parks Board under the NPA, according to CKNW.

Hamilton has been willing to criticize povertarians on her blog, so she looks pretty good to us.
Posted by reliable sources at 3:06 PM 1 comment: