Protester Lies to Media About Being "Homeless" 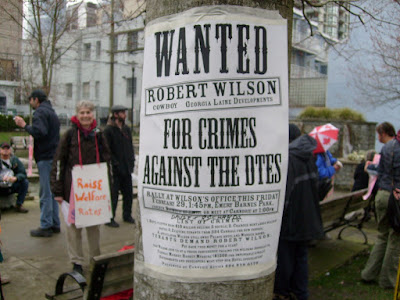 Downtown Eastsiders rallied on February 29th outside the office of developer Robert Wilson who owns Archer Realty and Georgia Laine Developments. They accused Wilson of charging rents exceeding the amount people are provided for rent on welfare cheques, forcing them to dip into their food money to cover the rent. They demanded that Wilson return their food money.

Charging tenants more than the welfare shelter allowance is not an uncommon practice. Certainly, Wilson was not the only landlord profiting from this practice. 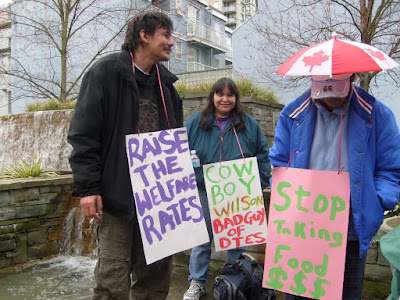 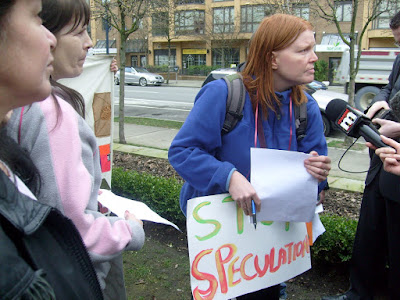 Wendy Pederson, the woman with the red hair and the "Stop Speculation" sign, was a paid organizer of the event. She works for the Carnegie Community Action Project which agitates for higher welfare rates and more social housing.

Pederson had been expecting to pay the bus fares of the swarm of people she took to the rally from Carnegie Centre via BC Transit. But the bus driver, eager to show his support for the cause, made a snap decision to give them a free ride.

Rally participants and media -- lots of people with cameras -- met at Emery Barnes Park and then marched across the street to the office of Archer Realty, the one with the yellow sign (which can be seen across the street behind Pederson.)

CCAP claimed on posters announcing that Robert Wilson was "Wanted" for "Crimes Against the Downtown Eastside". They claimed on the poster that Wilson "refuses to pay back food money" despite being a "hotel flipper" who had recently sold five hotels for a profit of $10 million. What Wilson did, of course, was completely legal. Most or all of the hotels he sold were to the BC government to create social housing for the poor and mentally ill. 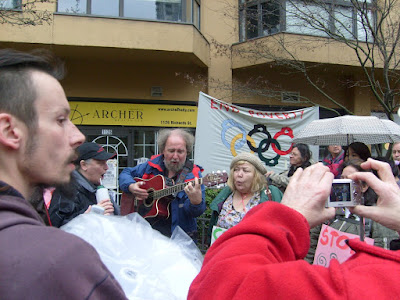 Nobody answered the door at Wilson's office.

A pre-arranged line up of people gave mini speeches in front of an "End Poverty" banner on which the Olympic rings were depicted as hand cuffs. But first the crowd was reminded that we were standing on Squamish land, a reminder that appears to have become obligatory at such events. Speakers accused the government of not doing enough while speculators worsen the homelessness problem.

Participants also sang. In the above photo, Earl Peach a professional musician who is paid to work on music projects with Carnegie Center -- he once sent the welfare poor emails requesting $20 to be in his choir -- is seen playing guitar as a small group sings. The song encouraged people to "rise up" and fight "oppression." 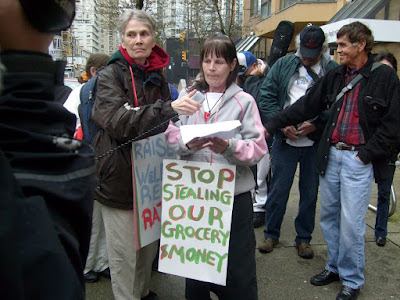 A tenant of the Shaldon Hotel, one of the hotels which Wilson has recently sold to the BC government, wore a "Stop Stealing Our Food Money" sign and spoke to the crowd. According to her calculations, Wilson owes $54,000 to those who had been dipping into their food money for the past year to pay rent. He was charging $450 for rent while the shelter allotment on welfare is $375. Tenants were therefore taking money from the "support" portion of their welfare cheque which is $180 (for food and other basics) to pay the rent.

Holding the microphone for the former Shaldon tenant is anti-poverty activist Jean Swanson, author of "Poor Bashing: The Politics of Exclusion". Swanson is an unpaid activist with the Carnegie Community Action Project and is considered by many Downtown Eastsiders to be a mentor to Wendy Pederson. 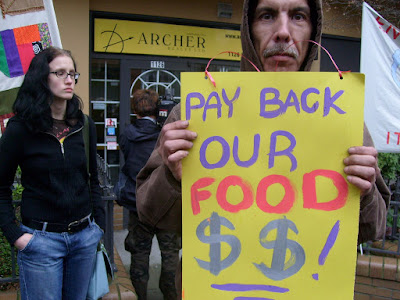 Another pre-arranged speaker, Ada, told the crowd and cameras that she had been evicted from 324 Carroll St., a building owned by Wilson and now being turned into condos. Ada emphasized that as of tonight, she had "no place to go" and was "homeless." She didn't mention that her homelessness would last just one night, as she had been accepted into the Ford Building run by Affordable Housing at Main & Hastings, and would be moving in tomorrow. In fact, before coming to the rally, she had moved her belongings over to the Ford where they were being stored until a suite became available the next day. Her cat was facing homelessness though, as the Ford building doesn't take pets.

About 50 people attended this afternoon's rally -- including numerous reporters and photographers, which of course are the ones who really count. " The rally was part of an ongoing effort by the Carnegie Action Project and the Citywide Housing Coalition -- Mel Lehan, head of the Coalition, attended the rally -- to pressure the BC government to keep it's promise to build social housing as an Olympics legacy.


Thanks to D.W. for passing on these photos to us.
Posted by reliable sources at 4:52 PM 2 comments: Links to this post

Portland Hotel Society Tosses a Few Crumbs Back to the Poor 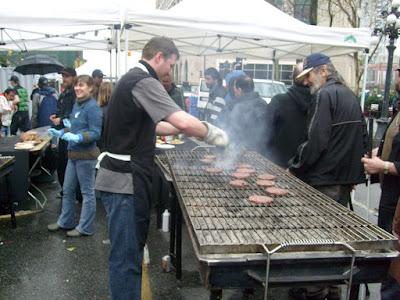 The Downtown Eastside has proven to be a goldmine for Liz Evans and Mark Townsend and other povertarians at the Portland Hotel Society. The Portland operates Insite, part of the growing medical-industrial complex eroding civil liberties on the Downtown Eastside. They also operate housing and an art gallery, and were even considering opening a daycare. The Portland Society has been accused by the Courier newspaper of 'empire building'.

But at lunchtime on Friday, the Portland Society was tossing crumbs to the poor. People lined up to get a plate containing a burger and coleslaw. It was the annual Portland Hotel Society barbeque at Pigeon Park.

The Portland knows the free food scene on the Downtown Eastside, that some people in free food line ups come back for seconds or thirds. They avoided that problem by giving out tickets which people then exchanged for their plate of food.
Posted by reliable sources at 4:49 PM No comments: Links to this post