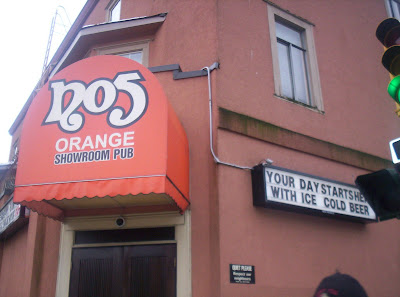 Last night, members of the Integrated Gang Unit entered the No. 5 Orange strip bar at Main & Powell St. They could be seen by a man standing in the free soup line up at the Sally Ann which parks across the street on Tuesday nights. "There were six of them," he says. "They had yellow stripes up the sides of their pants so I knew they were RCMP. They had dark jackets with 'Gang Unit' or "Gang something' on the back." They arrived in unmarked cars.
A few minutes later, two additional officers whom the witness says "looked like detectives" arrived in an unmarked car. They were looking at a laptop in their car, he noticed as he walked by with his hot soup. Then they got out of their car. "They were well dressed and they had briefcases." They spoke briefly to the other officers. Then all entered the strip bar together.
A woman who lives just a few doors up from the No. 5 Orange, which is rumored to be operated by the Hell's Angels (although an older man in the neighbourhood says he doesn't think that rumor is accurate), says a year or a year and a half ago, she was awakened one night by what sounded like gun shots. She looked out the window and saw a twenty-something East Indian male and another guy whom she couldn't see clearly, taking cover between parked cars. The East Indian guy told the other guy not to be crazy as he could get himself shot. There was a Jeep in the middle of the street with the door open and she got the impression that somebody in the vehicle had a gun. The guys on the street acted as though they had been drinking but she doesn't know if they had left the No. 5 Orange. There are other bars west of that block.
This woman, who is not criminally involved, didn't call police because, like many DTES residents, she is aware of evidence that the VPD can be "dirty" and she prefers to avoid them.
Posted by reliable sources at 3:01 PM 9 comments: