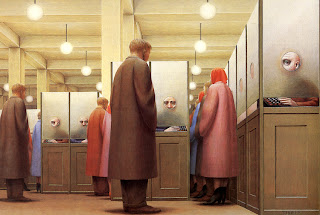 [To enlarge, click on picture.] Government Bureau by George Tooker

Suspicions that City Hall staff are spying on bloggers who criticize City managers were supported by statements made at a Carnegie Center Board meeting on Thursday evening in Vancouver.

One such statement was made by Margaret Prevost, Carnegie Center Association President, when announcing that the issue of Carnegie staff being criticized on the Downtown Eastside Enquirer blog had been referred to “the City” months earlier. Speaking in a slow, measured fashion, as if she were choosing her words carefully, Prevost said:

“They have resources that we don’t have in order to get information from websites.”

What information was City staff able to get from websites that could not simply be read from the computer screens at Carnegie? That was the question being asked by contributors to the Downtown Eastside Enquirer blog.

The employment of “resources” at City Hall against bloggers criticizing City management staff was not a fleeting exercise. This has been “a six or seven month process”, said Gena Thompson, Vice President of the Carnegie Center Association, at Thursday’s meeting. “It started in the winter,” Thompson told the audience who had come to the Carnegie theater in the sweltering July heat. But when Thompson narrowed down the approximate month in which the City had taken over the blog case, it became apparent that this campaign against the Downtown Eastside Enquirer bloggers had been underway for longer than 6 or 7 months. Thompson said records would have to be checked for confirmation, but to the best of her recollection, the meeting in which the blog case was referred to the City had occurred last October or November.

The time frame laid out by Thompson raised eyebrows amongst contributors to the Downtown Eastside Enquirer blog. It was just after the City reportedly took over the case that unwitting bloggers had begun to notice that when passwords were typed into public-access computers operated by the City of Vancouver (through the Vancouver Public Library), they seemed to be getting stolen. The DTES Enquirer blog was repeatedly hacked into, as was an account at the NowPublic.com news site used by a blogger to post links to the DTES Enquirer -- until a policy was enacted that passwords would no longer be typed into City of Vancouver computers.

It was also shortly after the City reportedly took over the case that access to blogger.com, the site used by bloggers to post on the DTES Enquirer, was blocked on City computers at Carnegie. Access to the Downtown Eastside Enquirer blog by the general public had been blocked earlier in the fall of 2006.

The hacking and censorship was reported to DTES Enquirer readers on Dec. 14, 2006 in a post entitled, "Back After Being Hacked". It was revealed in the post that the hacking had begun in the second week of December. First the hacker had deleted a few posts, but later returned and deleted the entire blog. A coincidence was clear from this post -- that it was during the same week as the hacker began interfering with blogging, that access to Google blogging technology on City computers at Carnegie was blocked.

In the same Jan. 11th post, it was reported that at the NowPublic.com news site, the hacker entered the account of "jr", who posts excerpts from the DTES Enquirer. Assuming the identity of "jr", the hacker changed the term "homeless" Bill Simpson to "homo" Bill Simpson. (Simpson, for the record, is heterosexual.) Racist material was also fraudulently entered in the comments section via jr's account by the hacker: "Chinks, Spics, Beans and Niggers.... by William B. Simpson". This article ended with the racist text, "Ban some of those chinks for gambling and drunk Indians." Simpson did not write these comments. He is quick to tell people that his grandmother is Metis, a fact that he is proud of.

In another post dated January 14, 2007, Hacker Leaves Another Harassing Comment, the DTES Enquirer reported misogynist text that had been inserted by the hacker. The Downtown Eastside Enquirer was referred to as the "Yeastside Enquirer" with "piss pussy power".

Hacking was reported to Google. Google advised to DTES Enquirer bloggers change the password -- something that had already done more than once. Only ceasing to post on the Vancouver City-Public Library computers cured the problem, which led to suspicions that the surveillance was occurring through those computers.


Whether City Hall staff recruited to delve into the Downtown Eastside Enquirer blog were lifting passwords from computers remains open to question. What is clear, though, is that in arranging to have the case of the DTES Enquirer turned over to City Hall, Carnegie Director Ethel Whitty was in a conflict of interest position. She was arranging to have resources of City Hall used against blogging taxpayers who just happened to be criticizing her management performance. Whitty, who is paid $104,000 annually by the City to deliver computer, educational and other services to the Downtown Eastside underclass, was exposed on the blog for too often allowing doors to those services to be locked. Criticism which began in a July 6, 2006 post, Carnegie Members Consider Pressing for Forensic Audit, resulted in no noticeable improvement. Frustration mounted, leading to the more acerbic criticism of Whitty in the Nov. 29, 2006 post, Carnegie Director Accused of Failing to Deliver Taxpayer Funded Services to the Poor.

Last fall, Whitty went to the Carnegie Board and stated that she was "hurt" by the blog criticism, according to a Board member (who did not grant permission to be named). Whitty got approval from the Board before turning the issue over to the City, but that was largely a formality. Whitty reminded the Board just last month when questioned about a City decision to bar a man from the Carnegie Center for posting "links" to the DTES Enquirer blog, that she discusses decisions with the Board only as a courtesy. "I actually don't answer to you", she said.

Whitty was not the only person in a conflict of interest position in making the Downtown Eastside Enquirer blog a target of City Hall “resources”. Whitty's supervisor at City Hall, Jacquie Forbes-Roberts, and in turn her supervisor City Manager Judy Rogers were also in a conflict of interest position. At the time the blog case was turned over to City Hall, both Forbes-Roberts and Rogers had been exposed on the blog for their handling of a sexual harassment complaint at Carnegie. They were exposed when Rogers complained of mistreatment by Vancouver Police Chief Jamie Graham, after he had placed a used target practice silhouette on her desk. It was demonstrated in the post that when it came to insensitivity to a woman, Graham had nothing over these two. That post is one of the few that was never retrieved after a hacker deleted the blog, although the content will be re-posted with a new angle in the future.

Certainly Rogers has demonstrated suspicious conduct in relation to this case. She consistently refused to respond to e-mails sent to her, one dated Dec. 4, 2006 and one dated Dec. 14, 2006, about the fact that individuals suspected of blogging were being harassed by workers at Carnegie. Mayor Sullivan acted in a similarly suspicious manner upon receipt of an e-mail dated Mar. 21, 2007, in which he was asked to ensure that Rogers stopped evading these e-mails. He simply would not respond.

City staff whose combined salaries totaeld roughly one million dollars last year have been turning their attention to the Downtown Eastside Enquirer blog since last fall. These staff persons include City Manager Judy Rogers and managerial and legal staff whom it is her job to oversee. And they include talent from the grossly understaffed VPD Computer Crimes Unit, recruited to 'chat' with bloggers.

In the spring of 2007, City staff arranged for police to contact individuals suspected of being involved with the DTES Enquirer blog -- despite not a shred of evidence against the bloggers. City staff availed themselves of the scarce resources of the VPD Computer Crime Unit -- resources that needed to be focused on credit card fraud rings and pedophile activity on the internet -- to target bloggers who were criticizing the performance of a few City managers and one supervisor. One man who does not even post on the DTES Enquirer, reported that the police officer who visited him seemed to be off duty, arriving after-hours with no partner and no uniform, and appeared to be doing a "favor" for a City staff person. Laying unfounded police complaints against bloggers is public mischief. It's a criminal offense.

The "blog burners" at City Hall remain active. The Downtown Eastside Enquirer has obtained a copy of the Notice on City of Vancouver letterhead signed by Jacquie Forbes-Roberts and dated June 21, 2007, banning a man from entering the Carnegie building because he has posted "links" to the Downtown Eastside Enquirer blog. Forbes-Roberts ended the notice with what could be interpreted as more intimidation, "We are continuing to investigate this matter."
Posted by reliable sources at 10:30 PM 4 comments: Links to this post