Volunteer of the Year Barred from Carnegie Center 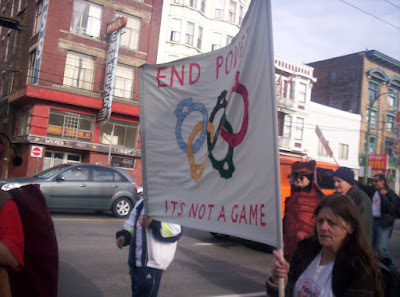 Ada D. returned to Carnegie Community Center yesterday after being barred from this City of Vancouver building for two weeks.

Ada (pictured in bottom right of above photo), a middle-aged woman with long brown hair originally from Newfoundland, was barred when another kitchen volunteer, Dominick, alleged that he had seen her take some sugar home. If she stole sugar once whose to say she wouldn’t be stealing, as the song goes, “sugar in the morning, sugar in the evening, sugar at supper time.”

Not only is Ada a hard worker, but in a neighborhood where people are often identified by what they don’t do, she is known as a person who does not use street drugs. You won’t see Ada smoking crack. I wonder if she could have worked that into her defense: “I steal but I do not inhale.”

When you are barred from Carnegie, you can’t just walk back into the building when your sentence is up. You have to go to the office of the Security boss, Skip, and act contrite. Skip was the guy who supervised the barring of homeless Bill Simpson from the Carnegie Learning Center, when he was accused of blogging about union members locking the poor out of services funded for them. But the word at Carnegie was that Ada would have no difficulty getting permission to re-enter the building because her name is linked to two magic words: dish washer. Carnegie is always short of dishwashers who will work for 80 cents an hour.

In the months before getting barred, Ada had been getting peeved about the fact that, even though she would do her scheduled dish washing shifts, she would be button-holed by staff to do another shift when she would drop by Carnegie to socialize. Ada didn’t always mind doing another shift of dish washing but, being a Newfoundlander, she was thinking for herself; she thought staff should give volunteers extra vouchers to compensate for grabbing them at the last minute to do a shift that wasn't theirs. She started saying this out loud to other volunteers. A long term Carnegie member commented that if she said that within earshot of CUPE members, it could cause her problems.

But Ada’s position in relation to Carnegie staff is getting stronger. “She’s getting her DB 2”, one member said under her breath. That means she’ll be getting the Disability welfare rate, a little over $900 a month, putting her on the top rung of the welfare ladder. Not only that, but she just got into subsidized housing. Her emerging relationship to Carnegie staff was best summed up by a Carnegie member who knows her: “She don’t have to suck hole to them anymore.”
Posted by reliable sources at 1:27 PM No comments: