Man on Stilts at Poverty Olympics Sunday at Japanese Hall 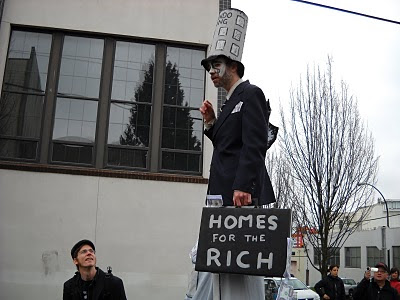 Better Dead than in the Red

Last week, a longtime Carnegie Centre volunteer was eating a meal at the Carnegie cafeteria and began to choke on his food. The volunteer, who is paralyzed on one side, made his way to the counter where staff sell food, and collapsed.

Roughly five minutes after the choking began, Skip Everall, head of Carnegie Security strides into the cafeteria, putting on his rubber gloves. Everall reprimanded the volunteer and the metrosexual multi-tasker. “You shouldn't have done that,” he scolded. “You're not qualified to do that.” Not qualified? To get hired at a City Community Centre cafeteria, an applicant has to have Basic First Aid.

“They don't want to get sued”, said a witness.

Posted by reliable sources at 10:14 AM 10 comments: Links to this post