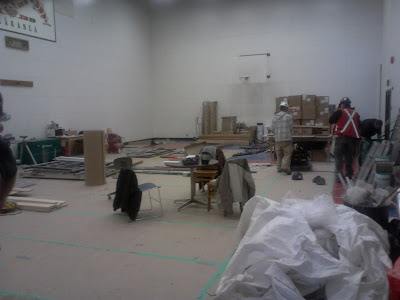 Carnegie Centre has been undergoing extensive renovations over the past few months. I snapped this photo of workmen in the gym last week to test the quality of my new cell phone camera. Cell phone cameras have difficulty getting enough light so photos are often of poor quality.
Posted by reliable sources at 4:15 PM No comments:

At the Tuesday night cabaret at Carnegie, a woman told me that former Downtown Eastsider Ken Stook, who some people knew as "Kane", had died. She said he had died over five years ago. I hadn't known. He put me up once ; he helped me out until I found an apartment and I helped him out with his rent.
Ken lived his last few years in Vancouver in the Ford building at Main & Hastings. He didn't get into drugs like some low income people who end up on the Downtown Eastside. I recall one of his friends in the Ford building trying crack because he wanted "to see what all the fuss was about". But Ken was frugal with the little money he had, and he didn't seem to be too tempted by drugs.
He used to volunteer at the now defunct La Quena cafe on Commercial Drive. I think he got meals or something in exchange.
A few years ago one of Ken's friends at the Ford building told me that he had returned to England to train to be a psychiatric nurse. When I ran into that friend again, he told me that Ken had since gotten ejected from the psych nurse program. He had been working with troubled kids and one of them had hit him. Ken hit him back.
Ken was born in Wales and as a young man was in the British army. While on duty, he had seen some people acting suspiciously around a car -- if I remember correctly, he thought they were IRA -- and he handcuffed them to the car while he was arranging for help to arrive. The car blew up. Time to move to Canada.
Ken would have been in roughly his early forties when he required a stay in a hospital in England. The woman I talked to didn't know the reason for his stay, just that it wasn't what killed him. What killed him was a bug he picked up in the hospital. Hospitals in England are notoriously unsanitary. CBC radio had a show early this year on that topic and discussed the high death rate. They interviewed a Canadian man whose mother had been in England, required a hospital stay, and had come out in a body bag as a result of picking up a super bug. Bugs are a problem in all hospitals -- Surrey, B.C. had a reputation for this too -- but the problem is particularly bad in England.
I don't know the reasons management has allowed British hospitals to become dirty death traps. But I do read news stories about staff in British hospitals being stretched attempting to accommodate the huge, intolerant, Muslim population. Muslim men don't want their women seen by a male doctor. Muslims demand that nurses turn the beds toward Mecca. Time to divert less resources toward accommodating and more toward disinfecting.
Ken got infected. Then he apparently got re-infected. Goodbye Ken.
Posted by reliable sources at 9:47 PM 9 comments: 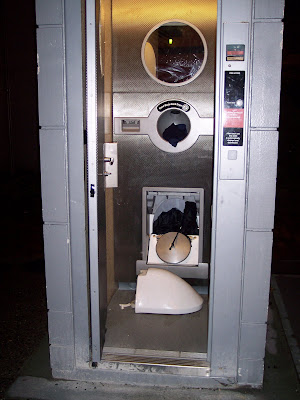 I just received this photo but it was taken around the 2nd last week of February at 2:30 a.m. on a Thursday, shortly after patrons streamed out of the No. 5 Orange strip bar at Main & Powell St.
My guess is that this toilet across the street from the No. 5 Orange was broken by one of their patrons, as the bar had just closed. Downtown Eastsiders have long said that much of the vandalism in the neighbourhood is committed by rowdies coming to the area to drink. Rowdies pull up to the No. 5 Orange in expensive cars, taxis, and limos.
For years, guys leaving the No. 5 Orange would walk across the street and take a leak in the garden or the hedge by the fire station. The Olympics changed that. The City installed a high-tech, self-cleaning outhouse on the sidewalk in front of the fire station. After that, men leaving the No. 5 Orange would walk across the street and around the outhouse to take a leak in the garden or the hedge by the fire station. There is something about that little electronic button you have to push to get into the outhouse that leaves a guy wondering whether that door can be trusted to open again on the way out.
Not only guys from the bar but pedestrians on the sidewalk too have to walk around the outhouse.
Keeping this electronic outhouse operating has been like flushing money down the toilet. When it was built, a team of City worker in florescent yellow vests were there for a long time -- nobody remembers just how long -- digging up the street and then putting it back together again. A team of workers were back again this year, making a big hole and then re-paving the sidewalk. Shortly afterwards the toilet bowl was busted.
The outhouse must be at least partly financed by CBS, the company that puts billboard advertisements on both sides of it. The only action neighbours have seen around the outhouse recently is the billboard man driving up in the white CBS van to tinker with the controls for the billboards, which he accesses by opening a small door in the back of the outhouse.
The door of the outhouse has been locked for almost a month. And guys continue to walk around it to take a low-tech leak in the garden or the hedge. 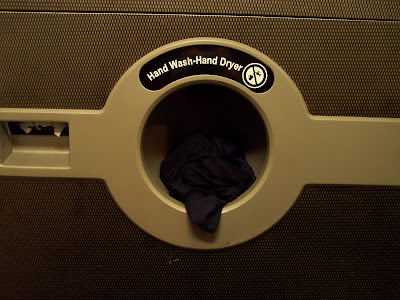 Photo of the sink in the outhouse which somebody stuffed a shirt into on the same night the toilet was broken
Posted by reliable sources at 10:40 PM 3 comments: