The Meeting the Carnegie Board Doesn't Want You to Attend 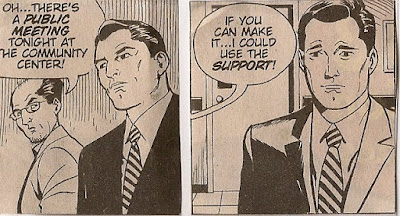 Did you know that the Carnegie Board is planning to change the constitution on Thursday night? Bet you didn’t. There is not one poster up at Carnegie about this important meeting.

The Board will be attempting to change the Constitution to allow them to run elections differently. Why? Presumably so that they have a chance to prevent dissident Board members such as Rachel Davis and William Simpson from getting elected again.

These two Board members have embarrassed Carnegie. After being stonewalled by the Carnegie Board and City staff, they went on radio to talk about how Carnegie management, with the complicity of the Board, barred homeless Simpson from the entire building just after he was elected to the Board. Davis has also publicly questioned the fact that Carnegie Newsletter editor Paul Taylor has been publishing libelous tirades against Simpson.

The Board and Taylor have tried various tactics to push Davis out. [Simpson, remember, is not allowed in the door.]

First came verbal abuse. At a February 9th Publication Meeting at Carnegie, Davis asked a polite question and was told by Taylor, “Shut up!” He responded to a question from her ally Wilf Reimer with “Up you ass!”

At the same meeting, Colleen, a Board member, asked Davis an irrational question, "Do you work for the Fraser Institute?" It is obvious that Davis has nothing to do with the Fraser Institute,but for leftists at Carnegie it is the ultimate insult to associate somebody with this conservative think tank.

Then came a secretive meeting. Davis tells it like this: "[T]he board held a private meeting about me I was not allowed to know about. They all got together after a board meeting, and after they'd expelled the membership, and I'd already left, they talked about my efforts to resolve the situation where a fellow Board member of the Carnegie [Bill Simpson] is presently barred for having on his own website linked to another one that they feel is unfair to Carnegie….[T]hey voted that I be asked to resign immediately.”

Davis attempted to read minutes from the meeting but was told by Carnegie Director, Ethel Whitty, that none had been kept. This is “against the Carnegie Constitution”, Davis says. Whitty, a City staff person, would have known this as City staff – often her – take minutes at all Carnegie meetings.

Then came a letter. The Board sent a letter to Davis asking her to resign her seat, telling her essentially that she wasn’t Board material. She declined.

Now comes a kick at the Constitution. Board members want to change the constitution apparently to give themselves time to prevent people like Davis and Simpson from getting elected. If the proposed resolution passes, the tradition of making Carnegie elections accessible to the poor and poorly educated, people who don't carry appointment books, many of whom got Simpson and Davis elected, will be eroded.

As it stands now, if you happen to be at Carnegie shootin’ the breeze with friends in the cafeteria or having a smoke on the outdoor patio, you might hear, “There’s an election tonight.” You can just drop in for a free coffee and participate. Somebody might nominate you. You might nominate somebody like Simpson and you and your pals might stick around for a few minutes to vote for him. That casualness will be lost if the Board gets there way on Thursday evening.

Here’s what Rachel Davis had to say in an email about the proposed changes to the constitution:

"[T]here will a General Meeting of the membership, where everyone is allowed to vote, and what we will all be voting on is a change to the Carnegie Constitution that would radically alter the way our Board is elected. The way it's always been, is that members are nominated to the board and then voted on at one meeting. What they are proposing is that this be changed to a two step process, where members are nominated at the board meeting before the Election Meeting. We already have such low attendance at the meeting where we elect our Board Directors, that when the Board is a voting block of 15, and the membership at the meeting is a diverse group of voters, numbering 20 or so, the board can vote itself in over and over again. And they do.

"This change the board desires, to a two step process, will even further water down the voting power of the membership if the membership wishes to elect someone new to the Board. They will now have to take the time out of their lives to show up to twice as many meetings, but the board will, of course, have to be at those meetings anyway. I consider this change to the election rules of the Carnegie Centre Constitution to be clearly prejudicial to the membership's electoral powers, and not in the best interests of the Carnegie. I feel we should be removing barriers from the full and even handed participation of our membership in the running of Carnegie, not making it even harder for them to be involved.

--------
An anti-poverty activist who doesn't want to be named as he is allied with activists at Carnegie, has weighed in on why there are no posters up for Thursday's meeting. "I've seen this all before; they bring in all their own people to vote and make sure the other side doesn't have a chance to bring their's."
Posted by reliable sources at 2:06 PM 12 comments: Links to this post 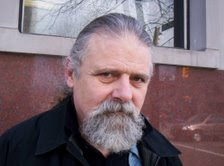 It may be true that you can’t fight City Hall. But if you hire a lawyer you might at least break through stonewalling by Vancouver City Hall Community Services General Manager, Jacquie Forbes-Roberts, and her in-house lawyer David Hill, both of whom have been thumbing their noses at the rule of law.

Carnegie Board member Rachel Davis forked over her own money to retain Vancouver lawyer Gregory Bruce to review the City’s treatment of a homeless man, William “Bill” Simpson (photo above). Bruce didn’t say anything in his letter to City Hall that Carnegie members haven’t been saying for months, but sometimes saying it on law firm stationery makes all the difference.

Bruce sent a letter to Hill dated March 11, 2008 about the Simpson matter. “As you likely know, Mr. Simpson was advised he was barred from the [Carnegie Community] Centre in a letter dated 21 June 2007 from Ms. Jacquie Forbes-Roberts. . . . .”

Forbes-Roberts notified Simpson in her letter that he was barred “indefinitely” from the Carnegie Community Centre for operating a website which “features links” to the Downtown Eastside Enquirer blog which criticizes Carnegie. Yet City staff failed to come up with even one example of libelous content on the blog when asked by Simpson to do so. The Downtown Eastside Enquirer is confident that none exists.

Bruce wrote: “The barring of Mr. Simpson from the Centre raises issues of due process, free speech, and compliance with the policy of the Centre. . . .” Free speech is a phrase with a history of falling on deaf ears of City staff. Carnegie Board member Sophie Friegang resigned last summer after the Carnegie Board and management refused to remedy the barring of Simpson; she stated at a public meeting that she had “poured over” the Downtown Eastside Enquirer blog and was convinced that its content was well within the boundaries of “free speech”.

In his letter, Bruce went on to express in legalese what Downtown Eastsiders had known instinctively, that the City is acting as though they are above the law. “The letter from Ms. Forbes-Roberts found Mr. Simpson guilty of association with a blog entitled downtowneastsideenquirer.blogspot.com via links with blogspot.com. . . . Guilt by association is no basis for barring someone from a public facility and is an offensive concept with a long history of disrepute. Guilt by association is also contrary to the rule of law.”

Bruce pointed out later in his letter what Downtown Eastsiders have repeatedly pointed out, that Forbes-Roberts and the City-appointed Director of Carnegie Center, Ethel Whitty, can’t get their stories straight about why Simpson was barred. Bruce pointed out that the “factual basis” for the barring of Simpson is not only “in dispute” but “differs from that put forward recently by Ms. Whitty.” He was apparently referring to an interview Whitty gave on CBC Radio during which she contradicted her boss Forbes-Roberts on the barring of Bill Simpson. Only one reason has been given to Simpson in writing though for the barring, that he operates a website which “features links” to the Downtown Eastside Enquirer blog.

In hammering away at the fact that a barring from a City building should be accompanied by an ability to appeal, Bruce went where many Carnegie members and at least one lawyer have gone before, over the past decade. “[T]he letter provides no avenue for appeal, no timeline for further investigations and determinations, and makes no effort to remedy, mediate or clarify the situation. . . . Barring a person from the Centre is an extreme action and should not be taken lightly or without providing the barred person with an opportunity to be heard and to appeal.”

Bruce never got around to using the phrase “police state” which Downtown Eastsiders have taken to using to describe the conduct of City management and staff at Carnegie Centre, but he refers to the brazen lack of tolerance for dissent that has prompted the use of this phrase. “The Centre serves and is part of the complex, diverse and politicized community in the Downtown Eastside. There will be dissenting voices and critical comments within this community. This should be expected and tolerated. . . .Barring should not be used as a vehicle for shunning those whom have rights and equal entitlement to the services offered at the Centre.”

At the close of his letter, Bruce attempted to end months of stonewalling by the City on the issue of the barring of Bill Simpson: “Ms. Davis requests that you assist in clarifying this issue. To date, Mr. Simpson awaits a follow up letter from Ms. Forbes-Roberts and has not received a reply to his letter sent to her in February 2008.”

Will the several hundred dollars Davis spent on Bruce result in straight answers from City staff who have spent thousands of public dollars on ass-covering and stonewalling in regards to the barring of a homeless man? I wouldn’t put money on it.