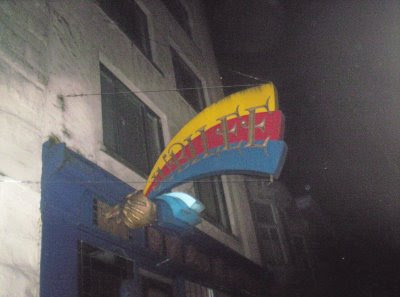 The Vancouver Police Emergency Response Team entered Jubilee Rooms at 235 Main St. on the Downtown Eastside this Good Friday evening. Eighteen cops were in the building, the desk clerk told tenants standing outside. Jubilee Rooms, formerly known as New Zealand Rooms is on Main St., between Cordova and Powell St., across from the courthouse.

A man "somehow got a key" to the place, a witness said. "That place is locked 24 hours a day. They can't figure out how he got a key." He managed to get past the male desk clerk and beat up his ex-girlfriend who lives there. The desk clerk called the police.

The man then barricaded himself in the washroom on the 1st floor. A male cop on a cell phone on the scene said the man apparently had a long knife.

Police brought out the ex-girlfriend. She was holding her hand and wrist up, as though she were favoring them. "Maybe her wrist got twisted," a witness speculated. Police put her in the back of the squad car. She was not handcuffed. "She wasn't crying," says a witness, "but she did look a bit shocked." A witness who arrived at this point says this was about 5:50 p.m. and the incident "must have happened just before that." It would not end until 7:55 p.m.

A cop said on his cell phone that the suspect had threatened suicide. He had said he wanted to kill himself and had been thinking about it for a while.

A large white truck arrived carrying Emergency Response Team equipment in the back. Some police officers went to the trunks of their cars and suited up with body armour, others went to the white truck and suited up. A driver and passenger got out of the white truck and entered the building with guns that, according to a witness, "resembled miniature AK47s". "Are those bean bag guns?", a witness asked a female cop passing by on horseback and chatting with people on the street. She said they were, adding that police try to avoid using lethal force when possible.

"You should have seen the arsenol!", says a witness, "when the cops came back down [the stairs of the building] and they put all their weapons on the cars." The cops were laughing and joking as they came out of the Jubilee, possibly out of relief said the witness.

The suspect was brought out alive.
Posted by reliable sources at 10:20 PM No comments: Links to this post